Shares of Western Digital (NASDAQ:WDC) gained 25.3% in September 2016, according to data from S&P Global Market Intelligence. The hard drive maker raised its first-quarter guidance early in the month. That event was the starting shot for not just Western Digital's own gains, but for gains for the computer hardware industry in general.

Based on a rich product mix in the first half of the first quarter, Western Digital boosted its earnings guidance by 17% while lifting its sales target 1.1% higher. The integration of recently acquired solid-state storage specialist SanDisk is also running ahead of schedule.

That day, Western Digital shares jumped as much as 13% higher. Investors saw the guidance boost as a good sign for the computer systems industry in general, igniting a rally across the supply chain. Fellow hard drive expert Seagate (NASDAQ:STX) rose 6% immediately. Various chip makers and system builders took a bit longer to catch on, but it's hard to find a ticker in this industry that underperformed the S&P 500 in September.

And it all started with Western Digital's rosy guidance update. 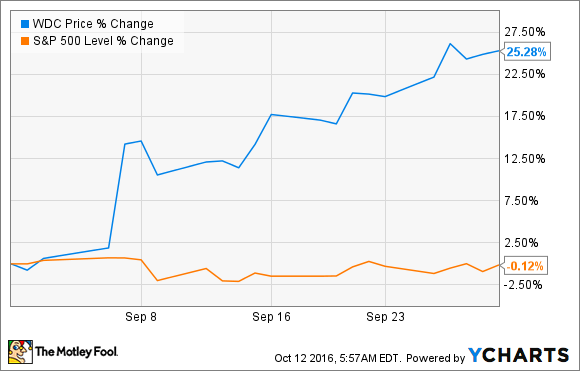 In particular, solid-state or SSD storage devices are replacing traditional hard drives at a tremendous rate. That's great for Western Digital, since the SanDisk acquisition gave the company an instant position of leadership in the SSD space.

SanDisk's influence is a large part of the reason why I personally own Western Digital shares but not Seagate. One storage specialist looks far more prepared for the next era of computing than the other one.

Next up, Western Digital is slated to release its full first-quarter results in two weeks. That will be required reading for anyone interesting in PC-related stocks.