Shares of Immunomedics (NASDAQ:IMMU), an antibody-based therapeutics company, rose by more than 21% last month, according to data from S&P Global Market Intelligence. 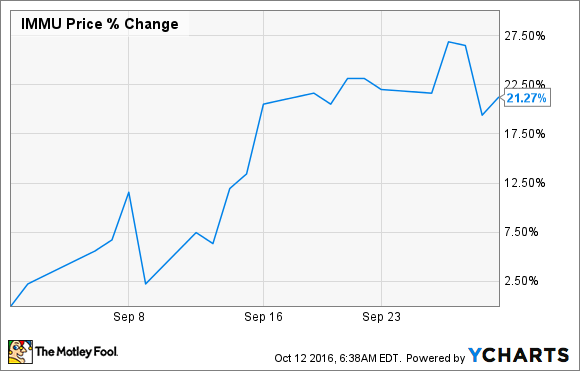 Interestingly enough, though, this substantial move upwards occurred without a major clinical or regulatory update. However, the company's management did present at three investor conferences in September, which may have attracted some much needed interest in the biopharma's anti-cancer drug development platform from institutional investors.

Immunomedics exited the most recent quarter with roughly a year's worth of cash on hand. So, not surprisingly, management decided to take advantage of this upswing in share price to raise $30 million via a secondary offering.

All eyes are currently on Immunomedics' experimental drug, sacituzumab govitecan (IMMU-132), for third-line metastatic triple negative breast cancer, or TNBC. The key factors at play are a possible accelerated regulatory filing for sacituzumab govitecan in TNBC that's on track for mid-2017, as well as a pivotal late-stage study slated to begin enrolling patients this December.

Immunomedics is apparently hoping the drug's encouraging mid-stage results will be enough to attract a lucrative licensing deal, whereby giving the company some additional breathing room from a financial standpoint to develop its remaining pipeline of anti-cancer agents.

While a licensing deal seems like the smartest route, Immunomedics isn't exactly in a position of strength from a bargaining standpoint. After all, the company doesn't appear to have the resources necessary to carry out a large, late-stage study for sacituzumab govitecan on its own -- that is, without halting most of its other ongoing clinical activities. So, I'd personally wait to hear the terms of any deal before buying shares of this small-cap oncology company.