What beverage maker has returned more than 700% over the last five years?

It's not Coca-Cola or PepsiCo or a beer maker like Anheuser Busch InBev (NYSE:BUD). It's industry underdog, scrappy Constellation Brands (NYSE:STZ), a U.S. company with a strong portfolio of wine, beer and liquor brands. The stock's strong performance has been fueled by a stable of Mexican beer brands and investment in the craft beer trend with a craft brewery acquisition. Since 2011, the stock has increased steadily, consistently beaten earnings estimates, and delivered strong profit growth, making it one of the best stocks to own over the last five years. 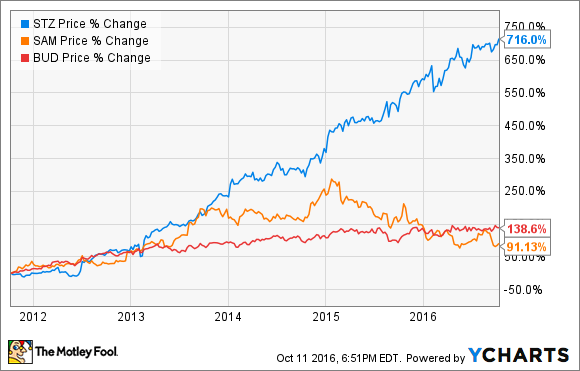 Over that time, the company has made several acquisitions including the Ruffino, Mark West, and Meiomi wine brands, the Casa Noble tequila brand, and Ballast Point brewery. However, none of those acquisitions has been more important than the 2013 deal that gave it full rights to sell Grupo Modelo's beers in the U.S. -- which include Corona, Modelo, and Pacifico -- when it acquired Crown Imports from AB InBev for $4.75 billion. Previously, its shared ownership of Crown 50-50 with the Budweiser parent.   The acquisition nearly doubled the Constellation's sales at the time.

Corona is one of Constellation's most popular brands. Image source: The Motley Fool.

South of the border

With its takeover of some of the most popular Mexican beer brands in the U.S., Constellation has found a fast-growing niche in an otherwise stagnant market as macrobrews like Bud, Bud Light, Miller Lite, and Coors Light have seen sales slip away to craft brews and other competitors. According to some analysts, Mexican beers like Corona have become convenient substitutes for traditional American light beers because they are easy to drink but don't carry the same stigma.

Recently, Constellation has accounted for about half of the beer growth in the U.S as its beer sales increased 13.6% last year. Beer now makes up more than half of the company's revenue.

As sales have grown over the past five years, the company's operating margin has also widened, reaching 27% last year. While its acquisition strategy gives it a high debt burden and therefore interest payments upwards of $300 million a year, it still has a bottom-line profit margin of 16%. Operating margin in beer was particularly strong at 35%.

In the near future, Constellation's beer strategy is focused on expanding capacity and distribution for its Mexican beer brands as well as innovating from its current portfolio and eyeing other potential craft beer acquisitions such as when it bought Ballast Point last year for nearly $1 billion.

That strong growth has continued this year as organic beer sales increased 15% in its most recent quarter or 20% with the addition of Ballast Point. Constellation's brands were responsible for 60% of growth in the U.S. beer market, an increase from a year ago. Overall operating income surged 27% in the quarter, driving a 17% increase in earnings per share.

Low interest rates have been kind to Constellation. While it's been on its acquisition run, the company has accumulated more than $8 billion in debt with little cash on the balance sheet, meaning the torrid pace with which it's taken over new brands may eventually have to slow, especially if interest rates move higher.

Still, that debt burden seems like a distant concern today. The company continues to deliver strong profit growth and making key investments in brewery expansion, distribution, and marketing to leverage those brands is the right move, especially at a time when its rivals are forced to spin off brands as they consolidate, which is how it was able to fully acquire Crown in 2013.

Constellation's strategy has been a simple one but it's delivered. Concentrate its portfolio on fast-growing segments like premium wine and spirits, craft, and imported beers, and invest in acquisitions and capital expenditures to grow it current portfolio. Without the albatross of a macro brew like many of its rivals have, that strategy has been a formula for success and industry-leading growth.

With a market cap above $30 billion, it will be harder for the stock to double so quickly, but I'd still expect it to outperform. Wall Street analysts continue to underestimate Constellation as it has topped earnings estimates for the last eight quarters. That's one big sign that this growth phase should continue.