Shares of opto-electronic components maker II-VI (NASDAQ:IIVI) rose 14.8% in September 2016, according to data from S&P Global Market Intelligence. It was a month of partnerships. First, shares jumped 4% overnight as Cisco Systems (NASDAQ: CSCO) gave II-VI an award for excellence in service. Then Nokia (NYSE:NOK) demonstrated a next-generation optical networking platform and investors kind of went crazy across the entire field of fiber-optic networking that day.

Cisco has been handing out supplier awards for 25 years, but this was II-VI's first win at that annual event. The particular prize that II-VI snagged typically goes to far larger businesses, and it's fair to say that nobody expected II-VI to take home this prestigious trophy.

At 1 terabit per second, this comes close to the maximal theoretical link speeds per channel. Using today's standard wavelength-division multiplexing technologies, one fiber can carry about 160 of these channels. The resulting 160-terabit speed of a full fiber packed with Nokia's new signals is more than a thirty-fold increase over the current state of the art.

II-VI doesn't exactly have a PCS product line ready to go right now, but is likely to license the technology from Nokia and its partners to come up with a shelf-ready solution within a couple of years. So will the rest of the optical component industry. Like I said earlier, the entire sector rose on Nokia's news. 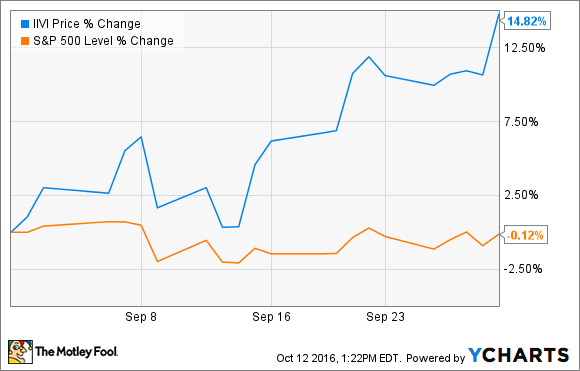 II-VI shares have now gained a market-beating 38% in 2016 and 51% over the last 52 weeks. Investors are champing at the bit as another global wave of high-speed network upgrades lurks just beyond the horizon. 5G wireless networks will require more robust landline support on the service provider's side, and the march of progress continues as relentlessly as ever.

Now II-VI needs to set itself apart as a premium component supplier for the upcoming ultra-broadband boom. That Cisco award sure looks like a useful tool in that regard.

For more detail on what II-VI is up to and where management plans to go next, watch for the first-quarter report on Oct. 25. Analysts are expecting 17% year-over-year sales growth, and the company has exceeded Wall Street's revenue targets in each of the last six reports.