A familiar face is joining the opposition against Energy Transfer Partners' (NYSE: ETP) Dakota Access Pipeline (DAPL). Former Democratic presidential candidate and current Vermont Senator Bernie Sanders was one of five U.S. senators that signed a letter calling on President Obama to order a compressive review of the project. This latest move is another attempt to halt construction of the controversial pipeline project, which could have dire consequences for Energy Transfer if it is successful.

The DAPL project is one of two major pipelines Energy Transfer Partners and its joint venture partners are building to improve the flow of crude oil between the North Dakota's Bakken shale and U.S. refineries. The first project is 1,172 miles of new pipeline from North Dakota to an oil hub in Illinois. From there, the crude can travel via rail to refineries on the east coast, or flow through the Energy Transfer Crude Oil Pipeline, which is undergoing a trunk line conversion to move the crude another 754 miles south to America's Gulf Coast refining hub: 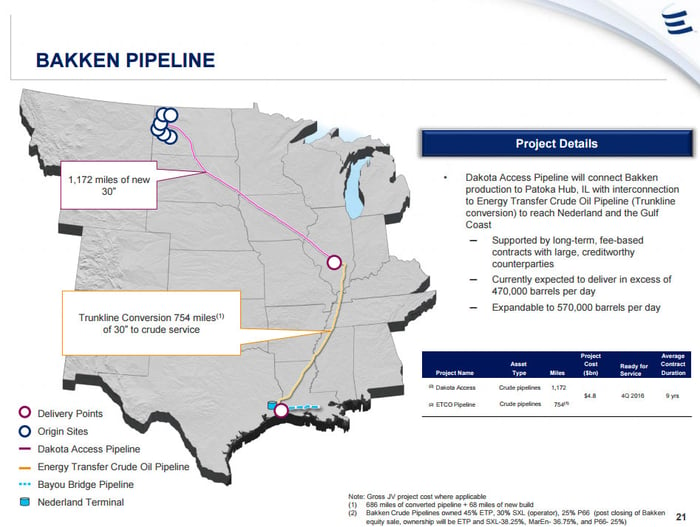 Overall, the project could transport up to 470,000 barrels per day of domestically produced oil, which represents about half of North Dakota's output of 930,931 barrels per day in August. That said, the pipeline would likely enable producers in the state to boost production because it would improve drilling economics by offering oil companies a cheaper option than shipping oil by rail. That's why Energy Transfer can expand the pipeline's capacity by another 100,000 barrels per day in the future.

At issue is a small stretch of the pipeline that would run across Lake Oahe, which is a sacred site to the Standing Rock Sioux tribe. The tribe is concerned that the construction would desecrate the land and pollute the water. Their opposition is gaining national attention and more opposition from political leaders. In fact, Sanders isn't the first presidential candidate to voice opposition to the project. Current Green Party presidential candidate Dr. Jill Stein recently had an arrest warrant issued because of her actions while protesting the pipeline's construction.

Given Sanders' name recognition, he might be able to do more to bring attention to the issue. What he and his fellow Democratic senators would like to see is that President Obama directs the Army Corps of Engineers to complete a full environmental impact statement on the pipeline route in question. Further, they want the president to suspend the project's current permits and halt all construction until the environmental and cultural review is complete, which could take several months.

Why this matters to Energy Transfer

Such a review at this late hour would be a big blow to Energy Transfer and its partners. That's because the company expected that the $4.8 billion project would be in service -- and generating cash flow -- by the end of this year. Instead, the company and its current partners, Sunoco Logistics Partners (NYSE: SXL) and Phillips 66 (NYSE:PSX), might have to wait quite some time to see to earn a return on that hefty investment.

That said, delaying the start of the contractually secured cash flow is only one of the potential problems facing Energy Transfer. Another issue is that the company and Sunoco Logistics recently agreed to a transaction to sell a minority stake in the project to Marathon Petroleum (NYSE:MPC) and Enbridge Energy Partners (NYSE:EEP) for $2 billion in cash. That money is crucial because it would allow Energy Transfer to pay down some of its debt and fund a portion of its other growth projects. Because of that, if that deal falls through or gets delayed, Energy Transfer might need to make an additional transaction to source funds to address its capital needs.

The DAPL project is critical to the future of Energy Transfer Partners. Not only do long-term contracts support that project's cash flow but the company has a deal in place to monetize a stake in the pipeline to provide it with funds for other priorities. However, last-ditch efforts by those in opposition are putting these plans at risk, especially now that the influential Senator Sanders recently voiced his opposition. Because of that, investors need to brace for the possibility that the project might not start producing oil and cash flow by the end of this year, which could have a significant impact on the company's financial situation going forward.