The all-important holiday shopping season is right around the corner. It has been a difficult year for traditional retailers like Wal-Mart (NYSE:WMT) and Target (NYSE:TGT) as sales have hit a soft patch, but internet retailers like Amazon (NASDAQ:AMZN) have enjoyed double-digit online sales growth once again this year. Though 2016 has been mixed thus far, chances are that retail sales will be strong headed into the winter months.

Inflation is in hibernation

Inflation, or the rising cost of goods and services, has overall been subdued in recent years. In 2015, the cost of living increases nearly hit a decade-long low of just 0.7%. The only time costs of living increased less was in 2008, when the rate hit 0.1%.

While certain things like healthcare, rent, and college tuition have skyrocketed in recent years, other areas have decreased. For example, energy costs have been in decline since the summer of 2014, when oil peaked at about $110 barrel in the United States. Even with gains in recent weeks, oil here in the states is still sitting at less than half of its cost two years ago, at about $50 barrel.

Why does this matter? While the monthly expenses picture might sound different depending on who you ask, on average, Americans are not seeing their basic costs of living increase. With the costs of putting food in the pantry and gas into the tank not budging much, or even falling for some, that means more money to spend on non-essentials, like this year's hottest toys, gadgets, and gizmos.

Americans get a pay raise

Even though the cost of living has taken a step back in recent years, so has the average American wage. Adjusted for inflation, the average U.S. household is still making less money than they were before the tech boom came undone in the late 1990s.

However, that is starting to change. The U.S. Census Bureau reported last week that the average household got a pay raise of 5.2% in 2015. Wages are rising overall for the first time since 2007. While it's still shy of numbers reached in 1999, it is nonetheless still welcome news for many families.

Paired with muted inflation last year, that pay increase amounts to more cash in pockets. This is backed up by recent reports showing that U.S. household disposable income -- money left over after the most basic of living expenses are paid for -- is still on the rise and hit a new record of over $1.4 trillion in August. With more cash in pockets, some of that money will inevitably get spent.

Retailers are cutting each other's throats

It's a race to the bottom in the world of retail. With the internet helping make pricing more transparent and empowering consumers to shop thrifty, prices of goods have been falling in recent years. This is evident in the last retail sales report, where general merchandiser's sales have fallen 0.1% this year, even while many are reporting growing foot traffic.

This is obviously a great situation if you're a shopper, but why is this good if you're a seller of goods? While overall sales have been struggling, profit margins are on the rise since the cost to produce items has fallen, and online sales can help reduce more expensive overhead that comes with running a physical store.

Low inflation helps families, but it also can benefit manufacturers. Part of the slowing inflation rate is coming from falling commodity prices, the base products used to make the stuff we all buy. Paired with selling costs falling -- in large part to store closures and a shift to the internet -- retailers don't necessarily need to sell as much as they did last year to maintain profitability.

An example of this can be seen at Target. Though revenue has trailed off recently, profitability is still at an all-time high from cost-cutting and a lower costs of goods. The same is true for Amazon. The top line is growing, but bottom-line profit is growing faster. 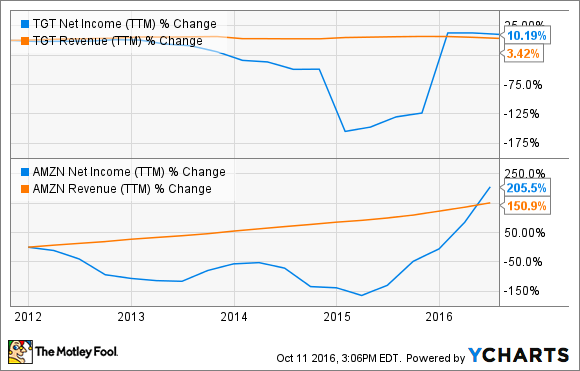 A lot of negativity has surrounded the retail industry this year, especially outside of online-only merchandisers, but all indications are that the holiday shopping season will be another strong one. Investors in the space should ignore the noise, but with the internet still heavily influencing sales to consumers, how your company is faring with its online efforts needs to be considered.