It's hard for people to believe today, but it used to take a lot longer for things to get from point A to point B. FedEx (NYSE:FDX) played an instrumental role in changing that, bringing express delivery into the mainstream and transforming the expectations that people have for getting the essential goods they need as quickly as possible.

Over its long and storied history, FedEx stock has performed well, and the company has shared its success not only by paying dividends but also by splitting its stock from time to time. Lately, though, FedEx hasn't turned to stock splits, and some investors wonder if it will ever do another one. Below, we'll look more closely at the history of FedEx's stock splits to see whether a future split could come soon.

Here are the dates and split ratios for the stock splits that FedEx has done in the past:

As you can see, FedEx used to do stock splits at fairly regular intervals when conditions seemed opportune. With average annual returns of 12.5% since 1978, FedEx has treated its shareholders very well indeed.

When FedEx historically did stock splits

FedEx's history of stock splits follows a pattern that's similar to what other stocks have gone through. The company's first split came only months after its initial public offering, with the company choosing to to respond to a share price that had soared nearly 80% right out of the gate. In 1980 and 1983, FedEx saw its share price climb above the $80 mark, and following the general tendency at the time to avoid triple-digit share prices, FedEx took preemptive measures to push the stock back downward into the $40 range on both occasions.

Thereafter, it took a long time for FedEx to regain its ground. After a couple of brief forays above $80 per share that eventually petered out, FedEx finally made an advance in late 1996 that prompted a 2-for-1 split. Yet with the tech boom leading to dramatic increases in delivery volume, FedEx soared to $115 per share in 1999, and that led to the company's final stock split -- just before the tech bust stopped the stock's advance in its tracks. 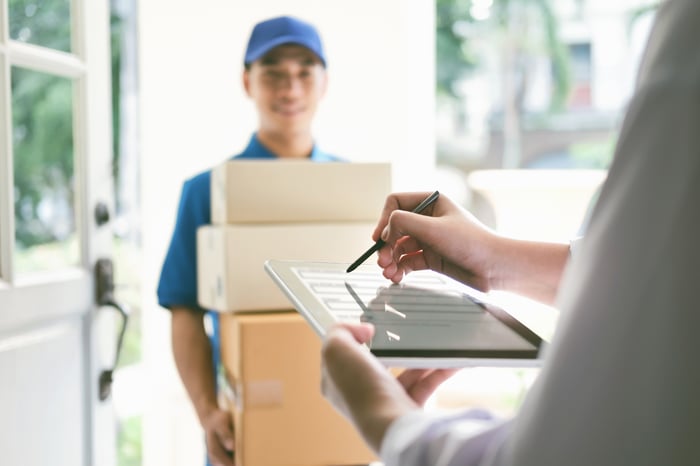 FedEx has had plenty of opportunities to do subsequent stock splits. In 2004 and 2005, the stock price briefly moved above $100 per share, yet that didn't prompt a move from the company's board of directors. By 2006, the stock was consistently trading at triple-digit levels. Still, no split came.

The economic recession in 2008 hit FedEx hard, and it took years for the stock to recover to its previous levels. Yet in 2013, the stock hit record highs, and ever since then, FedEx shares have climbed to new heights. Even at its current level of around $175 per share, FedEx has shown no inclination to do a stock split.

The change appears to be one of philosophy rather than future expectations. FedEx isn't avoiding a stock split because it thinks its stock will fall. Rather, it seems no longer to consider the same factors it used to look at in deciding when to split its stock.

Will FedEx ever split again?

FedEx has given investors one hint that stock splits might be a thing of the past for the company. At a FedEx investor meeting in late 2012, one investor asked whether FedEx would consider a stock split in the near future. CFO Alan Graf had a one-word response: "No."

Admittedly, stock splits have become much less common in general, and more companies have become comfortable with relatively high stock prices than in the past. Although some companies choose to do splits and cite increased liquidity in trading as a reason for doing so, the changing way in which people invest has made it far less important to keep share prices within a particular range.

At this point, it's hard to see FedEx being in any hurry to do a stock split. Despite its history of splits, it's possible that for FedEx, stock splits have become exactly that: history.