A number of headlines about the woes of Ford Motor Company's (NYSE:F) Mustang grabbed my attention last week. Part of the reason is that in my mind Ford's Mustang redesign has been a large success, considering it's been outselling its rival -- General Motors' (NYSE:GM) Chevrolet Camaro -- over the past couple years, and expanded its iconic image globally.

The Mustang had been outselling the Camaro nearly every month over the past two years until September, when the former recorded a sales plunge of 32%. But, let's back up and take a look at what caused the plunge, how big a deal it really is, and what Ford is doing about it.

There's no question Ford's Mustang stalled in September. Its sales in the U.S. plunged 32%, which was steeper than the 22.5% slide in Ford-brand car models as a group, and worse than any other individual Ford car decline except the Fiesta, which slid nearly 40%. On the flip side, GM's Camaro posted a 25.4% gain.

When the dust settled, those large swings in sales resulted in the Camaro chalking up 6,577 units sold last month and the Mustang narrowly trailing at 6,429. If you're keeping track, and you can be certain that some folks are, it's the first month in nearly two years that the Camaro managed to top the Mustang. But the Mustang has really put some distance between itself and its rival since being updated for the 2015 model year, though both are feeling the heat with consumers trading in passenger cars for SUVs and trucks. 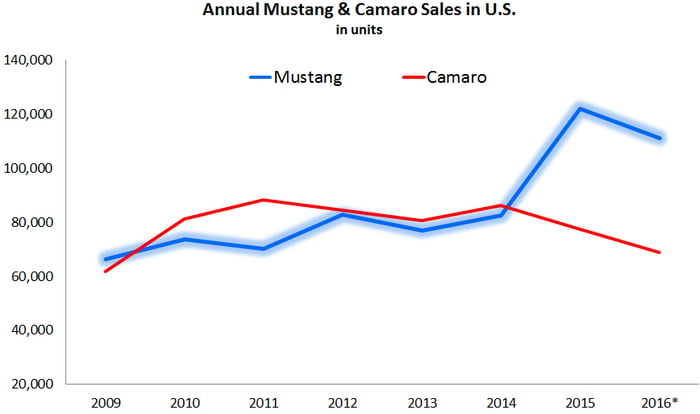 With headlines touting the very real 32% plunge in Mustang sales, it's important to ask why. The answer is, at least in part, that General Motors paid a price for the Camaro's strong gains. In fact, according to Bloomberg's report of J.D. Power industry data, the Camaro's incentives more than tripled last month to $3,409 per car. Meanwhile, Ford's Mustang only had a discount of about $2,602 strapped to the hood.

What's an automaker to do?

While the Mustang's huge sales decline (followed by Ford idling a factory for a week as a result) looks bad, it's really not. Matching supply to demand will be important to maintain Ford's financial performance and keep its inventory levels reasonable.

"In terms of incentives, we're always going to be disciplined, but we'll be competitive as well," Erich Merkle, Ford's sales analyst, told Bloomberg.

The best takeaway here for Ford investors is that if the Mustang is any indication, one Detroit automaker is not interested in getting into any incentive wars -- a great development as U.S. new-vehicle sales plateau.