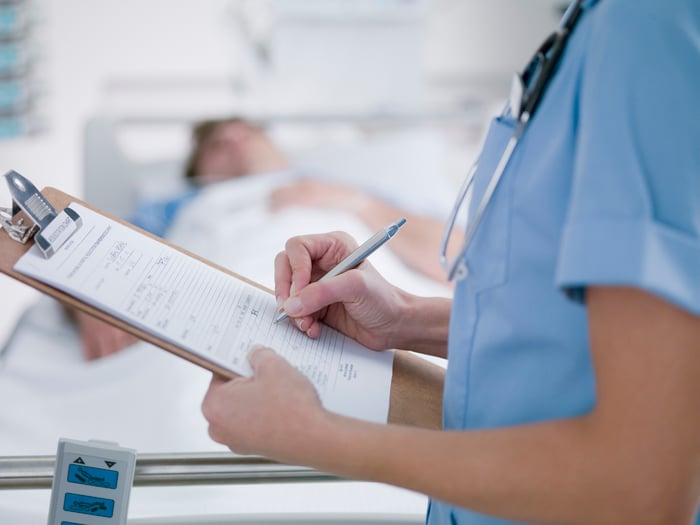 Investors searching for healthcare stocks might tend to focus on biotechs and drugmakers and fail to consider another alternative: hospital stocks. Hospitals provide medical services for which demand is increasing with the aging U.S. population. Here are the five best hospital stocks to buy right now.

Can the big losers become winners?

Looking at the year-to-date performances for these hospital stocks might raise some eyebrows. Two of the five best hospital stocks identified have negative returns for 2016. Can these losers begin chalking up wins for investors? I think so.

Tenet stands out as the biggest loser at this point. The problem isn't that the company's financial figures are horrible. Tenet's total revenue and earnings increased in the second quarter compared to the prior-year period. However, the company badly missed Wall Street expectations and provided a disappointing outlook.

Another issue for Tenet stems from a U.S. Department of Justice investigation of fraud at three of the company's former hospitals and one current hospital. Tenet settled with the federal government, paying nearly $514 million in civil and criminal fines.

The other big year-to-date loser on our list, Lifepoint Health, saw revenue grow but earnings slip in the second quarter compared to the prior-year period. Lifepoint CEO William F. Carpenter III attributed the disappointing results primarily to two hospitals. Carpenter stated that the company had taken steps to turn things around at the locations.

Aside from these company-specific issues, one of the biggest factors weighing down hospital stocks in general has been the wave of insurers pulling out of Obamacare exchanges. Most hospital stocks benefited tremendously from implementation of Obamacare in recent years. HCA's shares, for example, quadrupled during the past five years, while Universal Health Services' shares came close to increasing as much.

The future of Obamacare remains in doubt. There is a significant disagreement between the two primary political parties about the health reform legislation. Despite the uncertainty, however, the stocks of HCA and Select Medical have performed quite well.

One of the ways that HCA has succeeded is through its efforts to expand its presence in the freestanding surgery care market. These surgery centers are popular with payers because they're usually less costly than inpatient surgery. The big hospital chain's CEO, Milton Johnson, has stated that HCA could grow even more on this front.

Select Medical operates over 100 long-term acute care hospitals (LTACHs) plus 17 in-patient rehabilitation hospitals and nearly 1,500 outpatient centers. Its stock has been on something of a roller coaster ride in 2016, but shares have been on an upswing after the company announced positive second-quarter results.

Regardless of what ultimately happens with Obamacare, all five of these hospital chains should benefit from demographic trends. The U.S. population is aging. As Americans age, they will need more healthcare services.

HCA, Tenet, and Universal Health Servies are big players in the acute care market. All three companies should be able to successfully navigate healthcare changes in the coming years. The other two hospital stocks on our list, Lifepoint Health and Select Medical, focus on niche markets, but both appear to be financially strong and positioned for growth.

Like any stock, these five will experience some periods that are better than others. Over the long run, though, I think investors would be smart to consider any or all of these five top hospital stocks.