MercadoLibre (NASDAQ:MELI) stock took a big hit on Thursday on news that eBay (NASDAQ:EBAY) will be divesting the vast majority of its 20% stake in the company. In response, shares of the Latin America's e-commerce leader declined by nearly 8% on the day.

On the other hand, things look much better for investors in MercadoLibre over a longer timeframe. Even after that setback, the stock is still up by more than 30% in the last year.

An image is worth a thousand words, and the following charts explain why MercadoLibre stock is performing so well.

A market leader in a growing industry

eBay has been the top shareholder in MercadoLibre since 2001, when the Latin American company purchased the iBazar classifieds website from eBay in exchange for a 20% stake in itself. According to the press release from eBay, both companies will continue working together in cross-border trading opportunities even after eBay sells its MercadoLibre stock.

MercadoLibre's business model is quite similar to what eBay's looked like before it spun off PayPal (NASDAQ:PYPL) in 2015.  It makes nearly 60% of revenue from its marketplace platform, 23% from its MercadoPago digital payments platform, and the remaining 17% from classifieds and advertising.

The company is the market leader in all of the main countries where it operates. According to management, MercadoLibre has a market share of 31.7% in Brazil, 38.5% in Argentina, and 24.8% in Mexico. 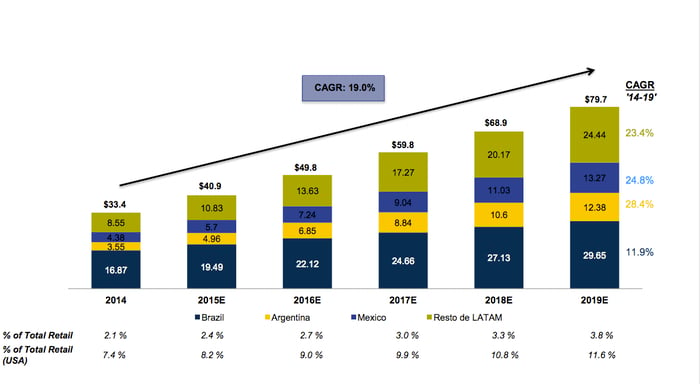 Big economies in Latin America are going through significant volatility. Brazil has experienced sluggish economic growth and rising inflation levels over the past several years; in Argentina, inflation is up while GDP has contracted; and the situation in Venezuela is downright horrendous from an economic and political perspective. The political winds are shifting in Brazil and Argentina lately, and maybe this will have a positive impact on MercadoLibre over the mid-term. Nevertheless, doing business in Latin America always involves a greater level of uncertainty than commerce in the U.S. or other developed countries.

Currency fluctuations are another key uncertainty driver for MercadoLibre. The company generates its sales and earnings in local currencies, so fluctuating exchange rates over a particular period can have a big impact on the company's performance, especially when translated into U.S. dollars.

For this reason, watching key operational metrics such as items sold and payments transactions can be a smart way to monitor the company's intrinsic performance while leaving macroeconomic considerations aside.

Fortunately for investors, MercadoLibre is looking stronger than ever from this point of view, and growth is even accelerating. Items sold hit 43.7 million in the second quarter of 2016, up 45% from Q2 2015 -- the highest growth rate the company has experienced since 2009. Gross merchandise volume was over $2 billion, growing 21.2% in U.S. dollars and up by 67.9% in local currencies. 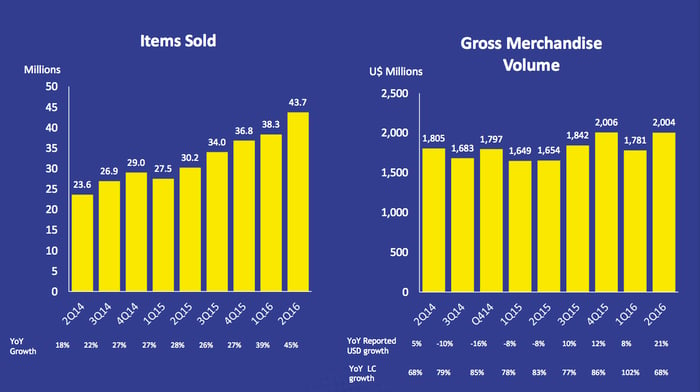 The payments business is also firing on all cylinders. The company processed 31.9 million transactions in the second quarter, growing 76% versus the same period in the prior year. MercadoPago's on-platform penetration reached a record high of 75%, approximately 20 percentage points higher than in the second quarter of 2015. Total payment volume was $1.8 billion, a year-over-year increase of 50.6% in U.S. dollars, and of 101.6% in local currencies. 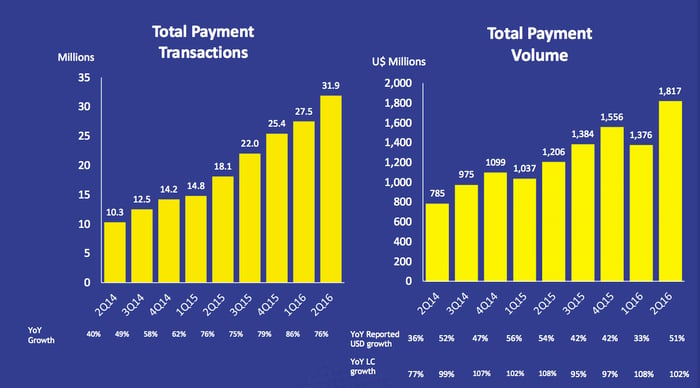 The company is effectively translating healthy operational performance into growing sales and earnings for investors. Net revenue in U.S. dollars has increased at 17% annually from 2011 to 2015, and the year-over-year increase in Q2 2016 was an even stronger 29.4%. In constant currency terms, sales grew 72.5% year-over-year during the quarter. 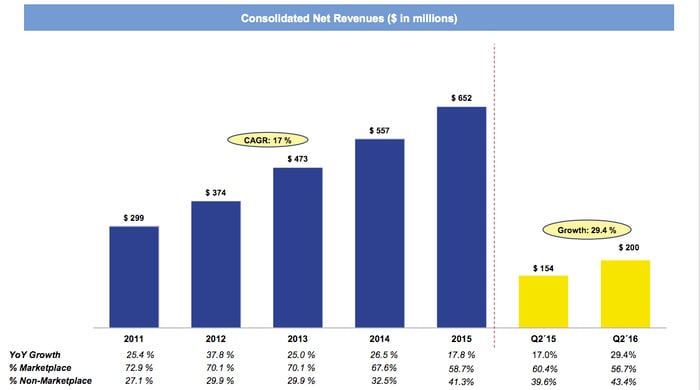 Profit margins are under pressure due to higher payment processing fees and increasing taxes on revenue as MercadoLibre is expanding into payments and shipping. Nevertheless, the business is still remarkably profitable: It's retaining nearly 63% of revenue as gross profit and 33% of sales as earnings before interest and taxes (EBIT). 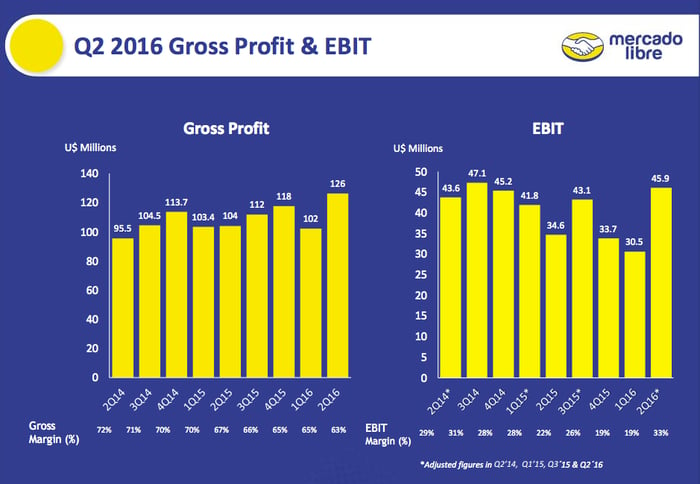 MercadoLibre is a market leader in a remarkably promising industry. The company is growing at high speed, and financial indicators such as sales and profits are clearly moving in the right direction. With all this in mind, it's easy to understand why MercadoLibre stock is firing on all cylinders.