I've been investing in the stock market for more than a decade, with varying degrees of success. Early on, I had no idea what I was doing, so I bought penny stocks. That turned out to be a disastrous decision, and I learned quickly that those should be avoided. From there, I switched to buying the highest-yielding stocks I could find. That too turned out poorly, since stocks that offer a 15% yield are usually doing something wrong that has damaged their stock price.

Thankfully, with the help of the Fool, I learned that buying high-quality stocks and holding them for the long term is the best way to invest, and I've been following that strategy for more than seven years. I can say firsthand it works, as my portfolio has soared over the years, thanks to a handful of big winners.

With that in mind, here's an inside look at my three biggest personal holdings, and the lessons that I've learned from owning them.

3. An online travel giant: 5% of my portfolio

I specifically remember seeing The Priceline Group's (NASDAQ:BKNG) stock move higher and higher when I was watching CNBC back in 2008. I personally had never used the company's "name your own price" feature, and didn't know anyone else who had, either. With hundreds of other online travel sites to choose from, I couldn't quite figure out why this company was such a market darling.

The answer finally dawned on me in 2010. What made this company so special was its terrific management team, which had a knack for acquiring other top-notch online travel brands. The most important acquisition in the Priceline Group's history came in 2005 when it bought Booking.com, a leader in the lucrative European hotel market. Booking.com had built out the largest network of hotels in the region, which attracted customers who valued selection. That in turn, lured more hotels to sign up with the platform, creating a powerful network effect, and allowing Priceline's revenue and profits to soar. 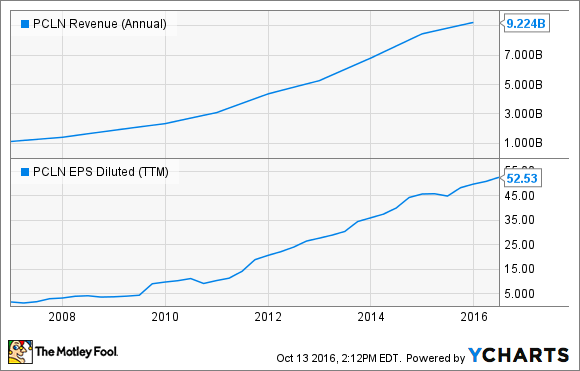 Once I finally understood the company's competitive advantage, I started buying the stock. I added shares to my portfolio on 16 separate occasions between 2010 and 2014, and my average cost basis is currently about $385. With shares currently trading north of $1,400, my decision to buy has resulted in an average gain of more than 350%.

To this day, I continue to believe that Priceline still has a plenty of room to grow. Thus, even though this stock has become one of my largest holdings, I have no intention to sell anytime soon.

2. Changing the face of surgery: 6% of my portfolio

I spent more than a decade of my career selling a medical device, so I learned first hand just how hard it can be to get healthcare providers to try something new. Since it can take years for them to incorporate a new device into their practices, many providers are loath to change their ways. That provides the incumbents with a huge competitive advantage over rivals, which can make the sector a great place to hunt for winning investments.

Knowing this, I stand in awe of what Intuitive Surgical (NASDAQ:ISRG) has accomplished. Simply put, the company's revolutionary da Vinci system has changed the face of surgery. The system allows many procedures to be performed using minimally invasive methods, which means patients recover more quickly, experience less pain, and achieve better health outcomes.

Providers have welcomed the company's system with open arms. As of the second quarter, Intuitive's installed base stood at 3,745 machines worldwide, giving it a massive advantage over potential rivals. What's more, the company now makes the majority of its money from selling high-margin consumables and from servicing its huge installed base. That gives the company a predictable -- and growing -- revenue stream.

I first started buying shares in 2010, but I added judiciously in 2013 when the stock took a tumble. Those currently look like smart buys as shares are currently trading near all-time highs, which has helped grow Intuitive into my second largest position.

I've been buying stuff on Amazon.com (NASDAQ:AMZN) for more than a decade, but for years, I wrote off the stock as an investment candidate. While I loved the company's site and its management team, and was generally very bullish on e-commerce, its shares always traded at a sky-high PE ratio. As a value investor at heart, I sat on the sidelines while shares went up, and up, and up.

I finally threw up my hands and decided to start buying in early 2010. Shares still traded for an insanely high valuation, but I liked the company so much that I simply wanted to become an owner. Over the next four years, I added to my position on 26 separate occasions, even though in late 2014, I was buying at prices nearly three times higher than what I paid in early 2010. What an amazing decision that turned out to be.

Your probably aware of what has happened since. Amazon continues to grow, and grow, and grow thanks to the huge successes of Marketplace, Amazon Web Services, and Prime. Shares more than doubled in 2015 alone, and are currently up more than 22% in 2016. Overall, I'm up more than 450% on my average cost basis in the company, which has turned Amazon.com into my largest holding.

I've made plenty of mistakes along the way, but my overall investing experience has been quite positive. Those early failures have taught me a series of valuable lessons that I plan on using to make better stock picks for the rest of my life.

First, don't let the dollar amount of a stock price scare you off. All three of the companies listed in this article traded for well over $100 per share when I started buying them, and yet all of them have continued to climb. What really matters is valuation and future prospects.

Second, if you love a company, don't get too hung up on its valuation. If you have a long enough time horizon, great companies can still produce stellar returns, even if you buy them at "high" prices.

Finally, never be afraid to add to your winners. The best stocks can go up for years on end, so you are doing yourself a huge disservice if you refuse to buy more.

Follow these simple rules and I'm convinced that your investing performance will improve -- just like mine did.