This week Sony (NYSE:SONY) began selling its Playstation VR headset. It's a pretty big move for the company as it attempts to enter a new hardware space in the growing virtual reality market.

Virtual reality (VR) will be worth an estimated $70 billion by 2020, according to TrendForce, and Sony wants to grab a large share of that to grow its gaming and network services division. Why? Because the company's gaming division is one its most lucrative businesses right now.

Here's a look at the Sony's most profitable segments, according to Sony's 2017 estimates: 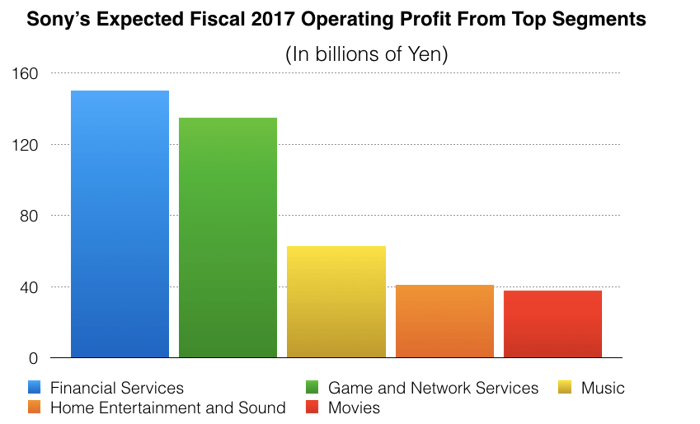 For fiscal 2017, Sony expects its game and network services operating profit to increase 52% year over year, mainly on expected sales of its PS4 console (of which the company has already sold 40 million).

So why does this all mean VR is so important to the company? Because Sony said at its corporate strategy meeting over the summer that its game and network services division is one of its fastest-growing segments and that VR should help spur that even more.

In the company's press release from its corporate strategy meeting, Sony had the following to say about its Game and Network Services segment.

Sony considers the Game and Network Services segment the largest growth driver of its mid-range corporate plan...The platform as a whole, including network services, is receiving widespread customer acclaim, and profit growth is exceeding the expectations held when the mid-range corporate plan was initially formed...Sony has identified virtual reality as an area it believes offers great future potential for the Sony Group in games, as well as other areas. Virtual reality is an application in which Sony believes it can leverage its technological strengths in areas such as digital imaging, content acquisition and production, as well as its entertainment assets.

In short, this segment is doing very well for Sony, and to keep the momentum going, it wants to throw virtual reality into the mix.

To do that, the company recently released a new version of its console -- the PS4 Slim -- just last month, and will release its PlayStation 4 Pro in November, in time for the holiday season.

The Slim is exactly what it sounds like: a thinner version of the original PS4. But the Pro packs 4K streaming capabilities and upgraded graphics processing that Sony hopes could help spur more console sales for potential VR users. The improved GPU specs might convince some serious VR players to upgrade their system.

To be clear, Sony says the current PS4 will can handle its VR headset just fine, but PS4 Pro was created for the most optimal Sony VR experience.

The virtual reality headsets hitting shelves this week are just one part of the company's VR push -- the other is creating content. Sony has partnered with 230 developers to create 50 VR games and original content for the PS4. It also recently partnered with Reality One to develop and publish VR content that will be an expansion of the company's films.

Sony's virtual reality play is becoming more and more clear as the company combines VR content and partnerships with its new hardware. If Sony's operating profit estimates pan out this year, then the company will be more than just a VR leader; it'll be one of the few companies that's already making a profit off of virtual reality.