Shares of social network Twitter (NYSE:TWTR) fell by about 6% on Friday when news broke that salesforce.com (NYSE:CRM), which was at one point considering whether it should place a bid to buy Twitter, will not be making a bid after all. 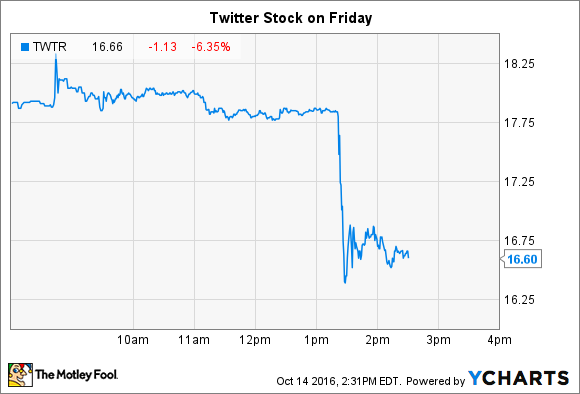 "In this case, we've walked away," said Salesforce CEO Marc Benioff in an interview with the Financial Times (via Reuters). "It wasn't the right fit for us."

This news follows a previous report earlier this month from Bloomberg stating top potential bidders, including Salesforce, were no longer interested in bidding for the company. But this report may carry more weight for investors since it quotes Benioff directly.

Twitter shareholders -- or investors in any stock, for that matter -- shouldn't buy or sell based on acquisition and merger speculation. Until there's an official announcement of an acquisition directly by the companies involved, there is simply too much uncertainty for investors to evaluate what a deal could mean.

Given that a buyout was never certain in the first place, this news has no bearing on the underlying value of Twitter's business.