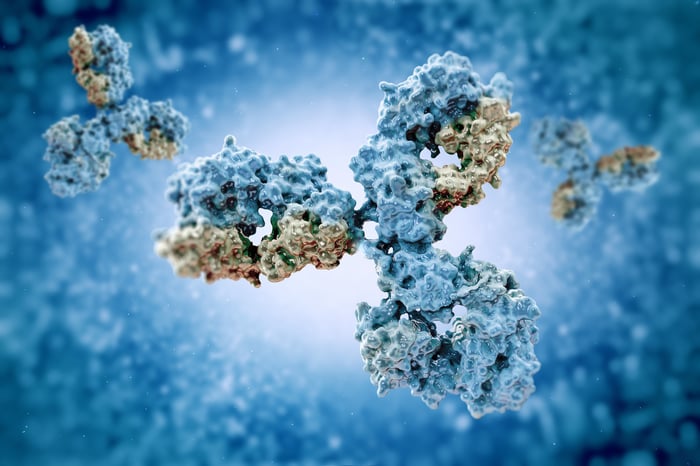 When a company's CEO leaves and major layoffs are announced, it's usually a sign that things aren't going very well. Merrimack Pharmaceuticals (NASDAQ:MACK) announced both of those developments earlier in October.

The biotech reported a loss of $50.7 million in the second quarter, significantly worse than the prior year period. Its share price has plunged over 30% since the beginning of 2016. With all of this bad news, can Merrimack get back on track?

Merrimack does have good news for a change. The company presented final results from the phase 3 study of Onivyde in combination with fluorouracil (5-FU) and leucovorin in treating pancreatic cancer at the European Society for Medical Oncology 2016 Congress a few days ago.

In the study, patients receiving the Onivyde combo survived for 6.2 months compared to a survival period of 4.2 months for patients receiving only 5-FU and leucovorin. Patients taking the Onivyde regimen had a 26% probability of surviving for one year. The probability of surviving one year for patients taking only 5-FU and leucovorin was 16%.

The positive results didn't stop there. Disease control for pancreatic cancer was achieved in twice as many patients taking the Onivyde combo versus those taking only 5-FU and leucovorin. Merrimack reported "little or no impact on quality of life over 12 weeks" for patients despite adding another chemotherapy with Onivyde.

Merrimack's shares jumped more than 3% on Oct. 11 after the biotech announced the positive phase 3 study results. Unfortunately, the good news wore off quickly. Merrimack's stock gave up all of the gains plus some the following day.

To be fair, Merrimack's stock dipped as part of a broader market pullback. However, there is ample reason to suspect that the phase 3 results won't be enough to help the biotech turn things around in a significant way -- at least not anytime soon.

Investors held high hopes for Onivyde. Pancreatic cancer is one of deadliest forms of cancer, with only 7% of patients surviving five years or more. Some analysts pegged peak annual sales for Onivyde at $1.5 billion.

There seem to be two possible reasons behind Onivyde's disappointing ramp-up. It could be that Merrimack's sales team isn't as effective as they should be. Merrimack is marketing the drug on its own inside the U.S. Shire plc owns commercialization rights outside of the U.S. and Taiwan thanks to its acquisition of Baxalta earlier this year. Baxalta's parent company, Baxter, spent $100 million upfront to license Onivyde from Merrimack in 2014.

The other possible reason for Onivyde's sluggish start-up is more concerning. What if the expected market just isn't there to the extent observers thought it would be? If this is the case, it's unlikely that Merrimack's recent good news will help significantly. Onivyde carries a black box warning for severe risk of diarrhea and low white blood cell count (neutropenia). Both conditions were listed among the common adverse events experienced by patients in the latest study results.

It's important to note that Onivyde won FDA approval in the first place based on the primary results of the same study for which Merrimack just reported final data. The results were good, but I don't think there's enough additional information to dramatically change physicians' opinions about the drug.

It's hard to say what happens next with Merrimack with any degree of confidence. My hunch is that the primary underlying issues with slow Onivyde sales are the biotech's sales and marketing efforts. I suspect that the exit of former Merrimack CEO Robert Mulroy is a hint that the company's board of directors thinks that execution of the commercial launch of Onivyde is the main problem.

This hunch would be easier to back up if Shire was already successfully selling Onivyde. However, the Ireland-based drugmaker is still waiting on European regulatory approval. Shire expects to obtain that approval by the end of this year. It will be very interesting to see how the company's launch of the drug goes.

I continue to think that Onivyde has great potential. Maybe a CEO change will help. Merrimack can probably get back on track, it just might take a while.

Will Positive Phase 3 Results Get Merrimack Back on Track? @themotleyfool #stocks $MACK Next Article
Current