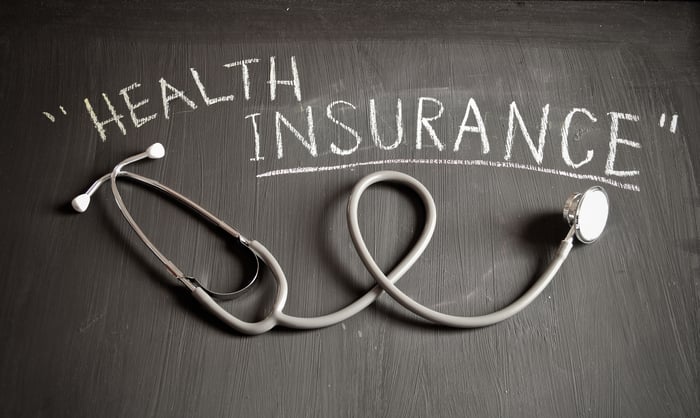 Aetna sees Humana's Medicare-focused business as being complementary with its own primarily commercially focused model. By combining the two, Aetna says it expects it would be able to offer customers across the U.S. more choices at more affordable prices.

Anthem's reasons for wanting to buy Cigna echo that theme. While Anthem has pointed out the value that would be created for shareholders with the acquisition, the company has also asserted that it would be able to offer broader choices and more affordable plans if combined with Cigna.

The Department of Justice is trying to stop both deals, though. Instead of giving customers more choices at better prices, the government has concluded these megamergers will reduce competition and increase prices.

These potential deals are having a ripple impact on other health insurers on our list. If the Anthem-Cigna transaction goes through, UnitedHealth will be knocked out of its current status as the largest health insurer in the country. UnitedHealth is in acquisition mode itself, after announcing plans to buy regional health insurer Rocky Mountain Health in July.

Centene and Wellcare could also be affected by a Cigna sale: Both have made offers to buy some of the Medicare Advantage plans that Aetna would be required to sell to mitigate antitrust concerns.

At the same time as health insurers are consolidating, many are also fleeing from the Obamacare exchanges. Why? They're losing a lot of money from participating in them.

UnitedHealth Group plans to pull out of Obamacare exchanges in at least 16 states. The insurer's Obamacare losses totaled over $1 billion over the past two years. CEO Stephen Hemsley stated that his company would have no "meaningful" financial exposure to the exchanges in 2017.

Similarly, Aetna announced in August that it planned to withdraw from 11 of the 15 state exchanges where it currently operates. Aetna's losses related to the Obamacare exchanges haven't been as massive as UnitedHealth's, but the company has still lost $430 million since the beginning of 2014.

While Anthem has also lost money on the exchanges, the company remains one of the few major health insurers committed to continued participation in them. Anthem is even offering to expand its presence to nine additional exchanges if the government allows the Cigna acquisition to go through.

These companies made the list of best health insurance stocks to buy for several reasons. One is that all of them are positioned to come out in great shape when the dust settles from the current questions about acquisitions and Obamacare.

All five companies should also experience solid growth in the future. Wall Street projects double-digit percentage annual earnings growth for each of these health insurers over the next five years.

Aetna, Anthem, and UnitedHealth Group made the cut largely because their economies of scale and marketing power give them huge competitive advantages. If Aetna and Anthem make it past antitrust scrutiny, those advantages will increase. All three big insurers should be able to survive and thrive no matter what is thrown their way.

Centene and Wellcare aren't nearly as big, but their focus on the Medicare and Medicaid niche markets give them competitive advantages as well. I wouldn't be surprised if either or both of these companies are acquisition targets themselves at some point in the future.

If I had to only pick one of these health insurance stocks, I'd go with Centene. It has tremendous growth prospects -- higher than any of the big insurers. Wellcare's nice run in 2016 has driven up its valuation, but Centene's share price still looks attractive, especially factoring in the earnings growth the company should see.