The oil market was calm this week despite an unexpectedly large build in oil inventories. Overall, crude rose 1.1% to just over $50 a barrel. That small move kept oil stocks in a narrow range, with few moving more than 10% in either direction. In fact, according to data from S&P Global Market Intelligence, RigNet (NASDAQ:RNET), Seadrill Partners (OTC:SDLP), Diamondback Energy (NASDAQ:FANG), Scorpio Tankers (NYSE: STNG), and Bristow Group (NYSE:BRS) were the only oil stocks to make big moves this week: 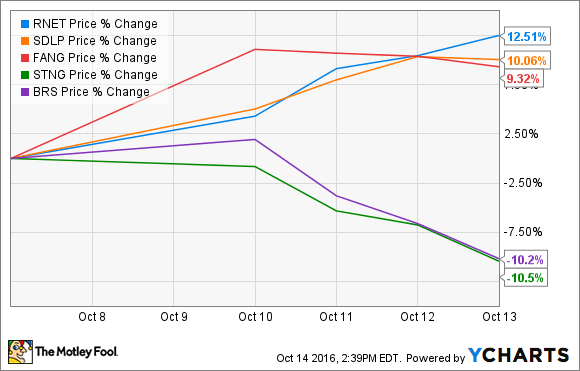 While Diamondback Energy had the smallest move percentage-wise, it had the biggest news of the group. On Monday, the shale driller announced that it was raising its 2016 production guidance while offering preliminary guidance for 2017, calling for 30% year-over-year production growth. In addition to that, Diamondback Energy pulled itself out of the running to buy privately held Silver Hill Energy Partners. While Diamondback Energy was reportedly near a deal to purchase the company for $2.5 billion, it ultimately bowed out because it has ample opportunities to deliver robust organic growth. That set the stage for fellow shale driller RSP Permian (NYSE: RSPP) to swoop in and acquire Silver Hill for $2.4 billion.

Oil prices, meanwhile, fueled this week's double-digit gains in offshore service companies RigNet and Seadrill Partners. That is because traders see crude's rally above $50 a barrel as potentially allowing oil companies to increase their investments in new offshore developments as they prepare their 2017 budgets. That said, crude needs to go much higher before the offshore sector begins to normalize again and drive meaningful growth for either RigNet or Seadrill Partners.

Meanwhile, offshore helicopter company Bristow Group hit some turbulence after flight bans for Super Puma helicopters remained in place in the U.K. and Norway after a fatal crash involving that helicopter earlier this year. Bristow Group currently has 27 of these helicopters in its fleet, which serves oil platforms in the North Sea. Given the continued weakness in offshore drilling, the ongoing flight ban of this helicopter is only making operating conditions worse for Bristow.

Finally, Scorpio Tankers sank along with several other oil tanker stocks due to continued concerns with shipping rates in the sector. Its shares also dropped much further than most due to renewed fears that sinking rates could cause the company's dividend to slump as well.

With crude oil in the $50s, stronger companies continue to be separated from their weaker peers. Shale producers like Diamondback Energy, for example, are starting to project robust growth in the years ahead now that oil is in the $50s. On the other hand, offshore-focused companies RigNet, Seadrill Partners, and Bristow Group are still struggling because they do not have anywhere near the certainty as onshore producers because it costs more money to drill offshore. That is why investors are better off sticking with shale-related companies until there's more clarity on the future of offshore oil development.