Much progress has been made in the last 100 years, but that didn't stop MIT Technology Review from calling a new gene-editing technology "The Biggest Biotech Discovery of the Century." While that's a mighty big claim, it may not be hyperbole. Researchers have big hopes that CRISPR -- a mechanism that bacteria use to protect against invading pathogens, akin to a bacterial immune system -- can be used for precisely editing genes in living organisms. In simple terms, CRISPR could allow scientists to remove and correct errors in genomes -- including errors that cause diseases.

Several factors are fueling this technology's spectacular rise. Namely, it's incredibly cheap, it's easy to use, and it delivers results quickly. Even raw, early versions of CRISPR boast significant advantages over established methods and technologies widely used in molecular biology -- and it continues to improve in accuracy. 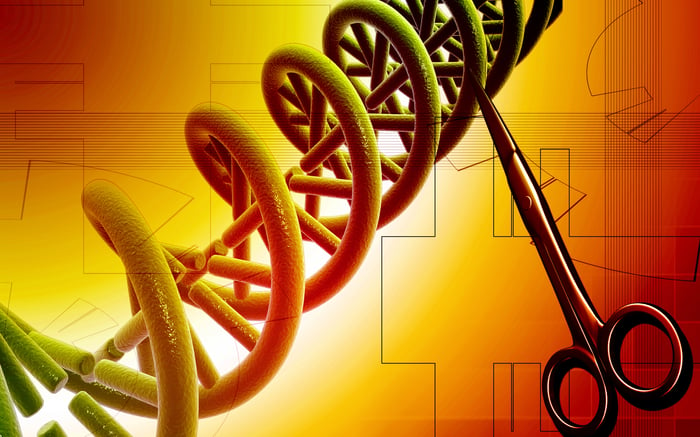 Today, CRISPR is being used to design more productive industrial microbes and introduce enhanced traits into agricultural crops. But perhaps the technology's greatest promise is its potential to treat and even cure diseases. There are three companies globally that own the intellectual property governing biopharma applications. Two are publicly traded -- Editas Medicine (NASDAQ:EDIT) and Intellia Therapeutics (NASDAQ:NTLA) -- while the third, CRISPR Therapeutics, is nearing an IPO expected to raise over $91.8 million.

Given the incredible potential of CRISPR gene-editing tools in healthcare, should you buy stock in the biotech discovery of the century?

Here are some important numbers on each company for investors to consider, as of the close of the second quarter 2016:

Each company remains in the earliest stages of development, as reflected by financial statements and the fact that no company has entered clinical trials to date (Editas Medicine expects to move its first drug candidate into the clinic in 2017). That highlights an obvious risk for investors: At the moment, CRISPR stocks are all about potential. They do not generate large amounts of revenue, and aside from potential milestone payments from partners, they will not do so for years.

That said, the gatekeepers of CRISPR have attracted interest and investment from leading biopharma companies.

Here's a breakdown of partnered programs for each of the three CRISPR companies:

There's plenty of crossover from each company's pipeline -- and that's not by mistake. Editas Medicine, Intellia Therapeutics, and CRISPR Therapeutics are all looking to take advantage of the versatility of CRISPR while focusing on correcting "simpler" genetic mutations that cause disease. In other words, these are diseases caused by mutations to single genes -- and sometimes even single base pairs on a single gene -- rather than highly complex diseases that draw strength from the presence of many genes. Cystic fibrosis and sickle cell disease, for instance, could theoretically be cured by correcting minor mutations in the genome.

Each CRISPR stock is also looking to get in on the emerging field of CAR-T immunotherapy not by making specific drug candidates, but by making the tools needed to more efficiently and accurately engineer the T cells at the center of those therapeutic platforms. While other biopharma companies are digging in the hills for gold, the gatekeepers of CRISPR are hoping to get rich selling headlamps and pickaxes.

Unfortunately, no talk of CRISPR is complete without discussing the bitter legal battle over the technology. It matters immensely, because billions of dollars in licensing and future royalties are staked to competing claims over the intellectual property. If the dispute is decided in a winner-take-all ruling, then at least one stock will be severely damaged, perhaps fatally.

At the center of the dispute is the question of who actually discovered the biotech breakthrough of the century. While the first scientists to actually discover CRISPR were at UC Berkeley and the University of Vienna, scientists at Harvard University, The Broad Institute, and MIT were the first to be granted patents covering broad applications of the technology. Since the patents were filed under the old patent system, which rewarded "first to discover," legal teams are poring over dates in laboratory notebooks to get the bottom of the issue. But the situation is complicated by arguments that the broad patents -- poetically awarded to The Broad Institute -- relied on prior art made possible by discoveries from Berkeley and Vienna. The mess has now entangled over 12 patents in disputes of legitimacy.

Simply put, it's messy. Intellia and CRISPR Therapeutics have staked claims to the UC Berkeley and University of Vienna family of patents, while Editas Medicine has laid claim to Harvard, Broad Institute, and MIT patents.

That doesn't even include other universities that have entered or been dragged into the fray. However, as investors can see, a winner-take-all legal outcome will either favor one CRISPR stock (Editas Medicine) or two (Intellia Therapeutics and CRISPR Therapeutics).

There are certainly big hopes for CRISPR stocks. However, investors should be cautioned that early enthusiasm for RNAi after it won the Nobel Prize in 2006 and gene therapy in the last several decades has failed to deliver big wins to this day. That may be changing with our improving understanding of biology, but many challenges remain for gene editing.