Whenever an aircraft manufacturer introduces a new model, it risks cannibalizing demand for its existing products. This is aggravated by the length of development cycles in the industry -- it usually takes more than five years for production of a new model to ramp up. As a result, maintaining stable production rates during model transitions is very challenging.

Boeing (NYSE:BA) has learned this lesson the hard way with its 777 aircraft program. While it had hoped to maintain production at 8.3 aircraft per month through the transition to the 777X, Boeing has been forced to reduce production to seven per month in 2017 due to slow sales. Many analysts believe that Boeing will have to cut production further in 2018 or 2019.

By contrast, Embraer (NYSE:ERJ) is doing an excellent job of transitioning from the first-generation E-Jets to the new E2-series models. It isn't getting any credit for this success, though. Embraer shares have lost half of their value in the past two years. 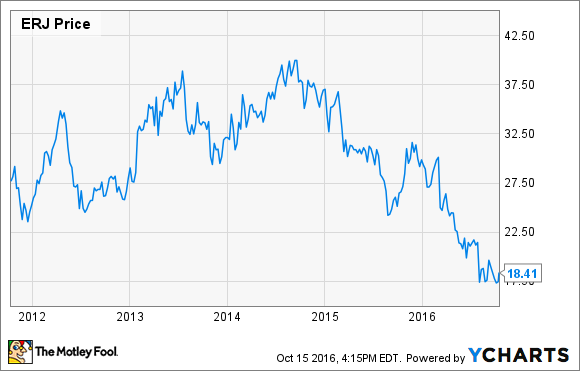 After a stretch of slow sales, by late 2012, Embraer's backlog had fallen to its lowest level in more than six years. Many analysts were worried that it would have to drastically reduce production.

The company reeled in a boatload of orders from U.S. regional airlines during 2013. However, Embraer also launched the E2 series of its E-Jets product line during the year. The new versions will offer up to 24% improvements in fuel efficiency, which clearly could deter airlines from buying the outgoing model.

Maintaining a smooth transition was particularly essential for Embraer because the E-Jets are its only commercial aircraft family in production. By contrast, Boeing can fall back on its other models to offset slumping 777 production.

Embraer pulls a rabbit out of the hat

Impressively, Embraer has managed to land order after order for its current-generation E-Jets over the past three years. Most of its orders have come from U.S. regional airlines looking to refresh their fleets with the market-leading E175, but it has also received dozens of orders from airlines in Europe and Asia.

Thus, there has been more than enough demand for Embraer to hold production steady. In fact, Embraer has been ramping up its commercial jet deliveries lately. After delivering 92 E-Jets in 2014, Embraer delivered 101 in 2015 and expects further growth in 2016 to 105-110 deliveries.

To win these orders, Embraer has had to offer bigger discounts, but it has hardly faced drastic pricing pressure. Its commercial aviation segment continues to earn double-digit margins: something that Boeing hasn't been able to deliver in recent memory.

Looking ahead to 2017, Embraer has already locked in nearly all of its production, although it will probably end up delivering somewhat fewer aircraft than in 2016. Embraer has also sold about 65% of its planned production for 2018, the last year for which E1-series planes are likely to represent the majority of its output.

Other headwinds are fading

Embraer's weak stock performance over the past two years can probably be traced to disappointments outside its commercial jet business. The executive jet market has been weak for years. Overproduction has led to severe pricing pressure, undermining profitability.

Meanwhile, revenue for Embraer's defense segment plunged last year, due to a combination of budget cuts in Brazil and the impact of the weak Brazilian real. Finally, Embraer recently took a $200 million charge to reflect the cost of settling a years-long corruption probe.

However, all of these problems should fade in the next year or two. Embraer recently reduced its workforce by about 9% through voluntary buyouts, which will help offset margin pressure in the executive jet and defense businesses. Additionally, Embraer's new KC-390 multi-role military plane should be ready for its first delivery in 2018, driving a return to growth for the defense segment.

As Embraer gets its other business segments back on track, the strength of its commercial aviation business should start to shine through. With 272 firm orders and another 400 options and letters of intent, Embraer's E2-series E-Jets are on their way to becoming a big success.

Embraer has almost completed the difficult step of lining up a smooth transition to the new generation of jets. Sooner or later, investors are bound to recognize this achievement.