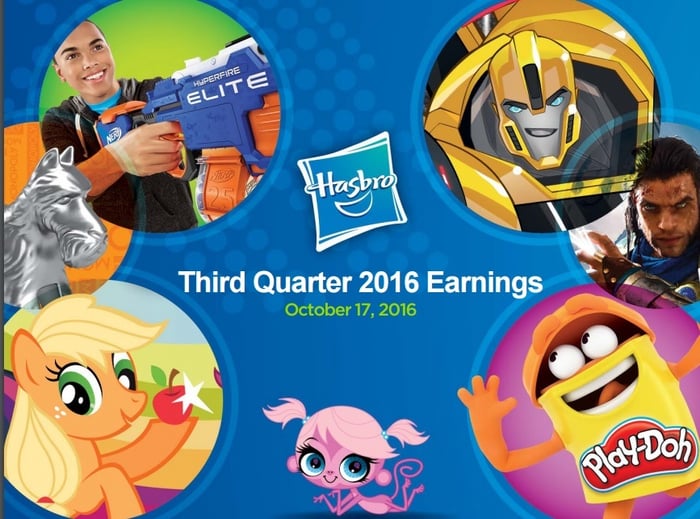 Currency headwinds, due to the relative strength of the U.S. dollar versus foreign currencies, have considerably subsided from last year's and even last quarter's levels. Third-quarter revenue includes a negative $2.8 million impact from foreign exchange compared with last quarter's negative $17.7 million impact.

Operating and profit margins increased, with operating income and earnings growing faster than revenue. Adjusted EPS is the earnings number to focus on, since it provides a like-to-like comparison. This comparison excludes the $0.06-per-share gain in last year's third quarter from Hasbro's sale of its manufacturing facilities in Massachusetts and Ireland.

Long-term investors shouldn't give too much credence to analysts' estimates since Wall Street is focused on the short term. However, it's worth noting that Hasbro beat revenue expectations of $1.56 billion and smashed EPS estimates of $1.74.

Sales of girls toys, which jumped 57% from the year-ago period, and games, up 13%, led category results. 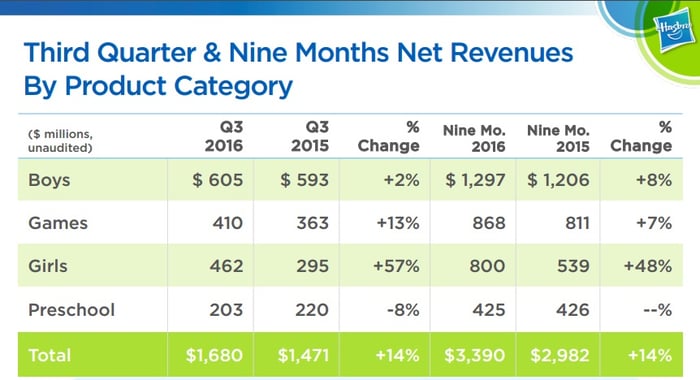 Girls results were driven by robust performance by Disney Princess and Disney Frozen fashion and small dolls, Dreamworks' Trolls, as well as growth in Baby Alive and Furby products. The two Disney brands are new sources of revenue for Hasbro in 2016, as the global rights to produce and market these dolls transferred to it from Mattel on Jan. 1.

Growth in games was driven by multiple gaming formats, including face-to-face, off-the-board, and digital. Growth in franchise brand Magic: The Gathering, Pie Face, and several other brands contributed to the strong results.

Boys results were driven by Nerf, as usual, and Transformers.

Hasbro performed solidly across its three segments, with revenue in U.S. and Canada rising 16%, international up 13%, and entertainment and licensing up 8%. Within international, revenue in emerging markets grew 16%, or 15% in constant currency. Operating profits were up 22% and 17%, respectively, in U.S./Canada and international. Entertainment and licensing's operating profit declined 13%, but this is nothing investors should be concerned about as the decline was due to investments in building the company's global consumer products team and higher expenses at Backflip Studios in support of new gaming launches.

Hasbro turned in a great quarter, with the strong momentum boding well for it to cap off a solid year with a strong performance in the critical holiday quarter.

On Sept. 30, the toymaker began rolling out toys based on the upcoming pre-holiday release of Rogue One: A Star Wars Story, so we didn't get an indication in the third quarter as to consumer demand for these toys. However, Hasbro CEO Brian Goldner continues to maintain that the company expects total 2016 Star Wars toys sales to be about on par with 2015's incredibly strong sales of these toys.

Looking ahead to the first quarter of 2017, Hasbro has several major catalysts for growth. Notably, its toy sales should get a nice boost from Disney's release of its live action movie, Beauty and the Beast, and the broadcast premier of Frozen.