Got an extra five bucks in your pocket? If so, then you've got enough to buy a share of either satellite radio provider Sirius XM (NASDAQ:SIRI) or biotech start-up Organovo (NASDAQ:ONVO).

Both of these companies have had solid runs since hitting lows in February. And yet, they are both still less than $5 per share. 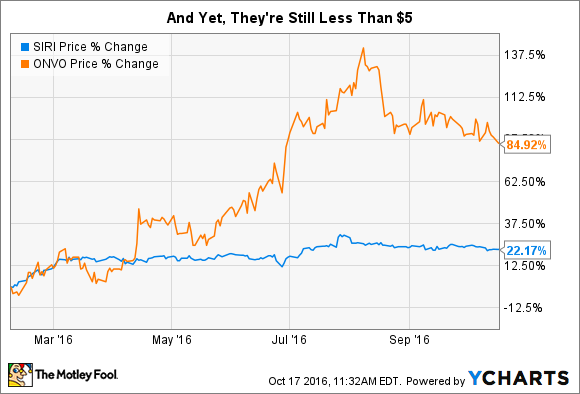 But does that mean they're right for you? Here's a look at the key factors to consider.

Organovo has two key products on the market: bioprinted liver and kidney tissues. The former has been available for over a year, while the latter was only recently released. The idea behind these tissues is that biopharmaceutical companies can test their drugs on these tissues to see if there are any toxicity issues.

Historically, such toxicities only show up when a drug enters clinical trials, and large ones at that -- which can often lead to a company shelving a drug after already investing a ton of money. By offering a way to let drug companies kill their ideas faster (because they're toxic), Organovo allows big pharma to save billions in sunk costs. Already, seven of the top 25 global biopharmaceutical companies  are using the liver tissues, while two have already signed on to the kidney tissues since their September release. That's important traction.

At the same time, the Organovo is far from profitable, and may need to dilute shareholders if it starts running out of money. Currently, management doesn't think that will be necessary, as it has $54 million of cash on hand. At the same time, those coffers were at almost $77 million just 12 months ago.  Analysts also don't see the company being profitable anytime soon.

Shareholders should understand that Organovo is a high-risk, high-reward stock before purchasing shares. But if you have an appetite for that, shares are trading for under $4 per share.

Can Sirius survive in the age of the internet?

Sirius couldn't be more different than Organovo -- an established business that's been around since 1990 and has billions in annual revenue.

Currently, Sirius XM has over 30.6 million subscribers to its service. Its customer count has been growing for a long time. And while that growth had been slowing heading into 2016, those trends seem to have reversed themselves. During the first and second quarters of 2016, subscribers grew 8% and 7%, respectively.

That's important, because once customers are locked in to Sirius' plans, there's a relatively low churn rate of 1.8%.  In other words, customers tend to stay for a long time. Equally important, many new cars are installed with a free trial of Sirius. While only 40% of these new car buyers stay on with the service after the trial is over, it still provides a relatively cheap and easy way for the company to attract subscribers.

While the risk is less with Sirius, the reward is probably lower than it could be for Organovo. If you like a safer stock, you'd be better off with Sirius and its current share price of just around $4.13 per share.

If you only have $5 (or a less than $500 for that matter) to invest, you may want to consider waiting to make a stock purchase. Commissions running anywhere between $5 and $10 per trade, and you typically don't want to hand over more than 2% of your hard-earned cash in fees.

But there's a bigger takeaway: if you're a beginning investor, it's important to remember that share price is pretty arbitrary. Whether you buy 1,000 shares of a $5 stock, or five shares of a $1,000 stock, you've invested the same amount of money. If the stock goes up or down by the same percentage, your gains and losses are exactly the same.

That being said, I still think these two are worth investigating based on your comfort with risk.