Fresh off a data release announcement providing full details of Opdivo's failure in its Phase 3 CheckMate-026 study, Bristol-Myers Squibb (NYSE:BMY) shares dipped another 10%, bringing shares off a whopping 35% since their July highs. 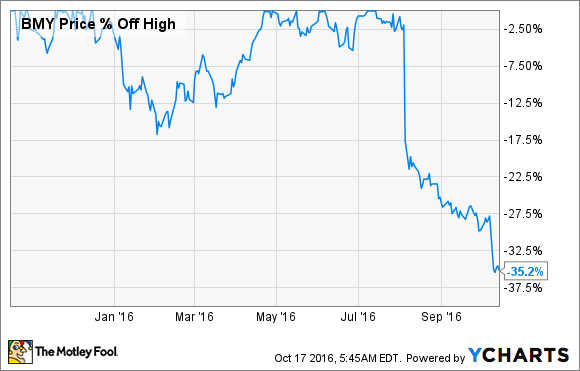 I believe this pullback is overdone and current price levels offer an attractive entry point for long term investors. Below are 3 reasons to buy Bristol-Myers Squibb.

It is impossible to discuss Bristol-Myers without first discussing blockbuster immunotherapy drug Opdivo. Opdivo had rapidly racked up approvals as a treatment for metastatic melanoma, second-line advanced renal cell carcinoma, and second-line non-small cell lung cancer. This quick launch resulted in total sales of Opdivo nearing $1 billion last year, its first year on the market. Second quarter 2016 sales of Opdivo came in at $840 million, up an astounding 589% year-over-year, bringing Opdivo sales up to more than a $3 billion annualized run rate.

While Opdivo's failure in CheckMate-026 (where it was being studied as a monotherapy for first-line advanced non-small cell lung cancer, or NSCLC) is undoubtedly a disappointment, investors should make note that cancer immunotherapies are moving more and more toward combination therapies. With Opdivo still in dozens of planned or ongoing combination therapy trials, I am confident that Opdivo will continue to provide significant growth prospects moving into the future.

Another thing to keep in mind with Bristol is that while Opdivo may be gobbling up all of the current headlines, Bristol-Myers is no one-trick-pony. In fact, Bristol-Myers has a whopping nine billion dollar-plus drugs or franchises which are outlined below:

These products span across virology, oncology, cardiovascular, and immunoscience. Aside from Opdivo, of particular interest is cardiovascular product Eliquis. Eliquis is an oral blood thinner indicated for stroke prevention in atrial fibrillation and the prevention and treatment of venous thromboembolic (VTE) disorders. Within both of these indications, Eliquis has quickly become the number one novel anticoagulant in total prescriptions among cardiologists and new-to-brand prescriptions across all physicians. Q2 2016 sales of Eliquis came in at $777 million, up 78% year-over-year.

Finally, while Opdivo's failure in first-line NSCLC should rightly warrant a decrease in BMY's overall valuation, I believe a 35% drop (or a $40 billion loss of market cap) represents an overcorrection for Bristol's shares. In order to support this, I'll attempt to value what an approval in NSCLC could have meant to Bristol-Myers: A sell-off of $40 billion could only be justified if the lost of Opdivo in NSCLC resulted in a loss of greater than $40 billion in future earnings potential.

Over the past 3 years, Bristol has averaged around a 13% net profit margin. Doing some basic arithmetic, at a 13% net profit margin, losing $40 billion in earnings would equate to losing over $300 billion in future revenues. As Opdivo only has patent protection out to 2027(around 10 years), this percentage drop in market cap represents a $30 billion annualized loss of Opdivo revenues. However, analysts have pointed to a figure closer to $4 billion in lost peak sales due to this trial failure.

As usual, the market is either overly optimistic or overly pessimistic. Luckily for today's investors, I believe the overly pessimistic market outlook for Bristol offers investors an attractive entry point into one of the best biotech bluechips. With a forward PE of around 16x next year's earnings and a 5 year PEG ratio just over 1, I believe Bristol is now significantly undervalued relative to its growth potential. For long-term investors, now might just be the time to get bullish on Bristol.