Alphabet (NASDAQ:GOOG) (NASDAQ:GOOGL) is one of the most powerful and influential tech corporations in the world, and the company is usually rumored to be interested in all kinds of acquisitions. However, as opposed to going shopping for other businesses, a new share buyback program could be a smarter use of the company's capital.

Alphabet has too much cash 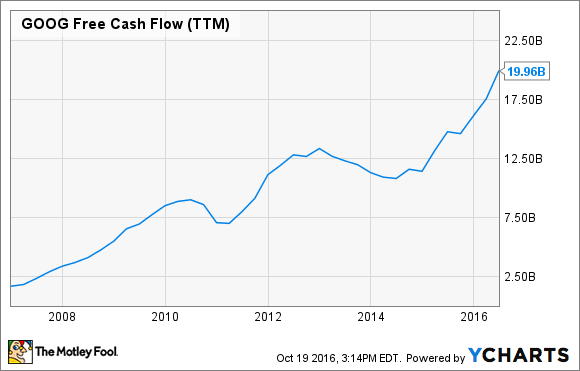 It makes sense to keep some cash at hand in case the company needs to use it unexpectedly. However, Alphabet's cash hoard looks excessively big, especially when considering that the business is a cash-generating machine. Most of that money is invested in low-risk, fixed-income assets, and those kinds of investments are producing anemic returns in times of historically low interest rates.

In October of 2015, Alphabet announced its first share buyback program in history -- for nearly $5.1 billion. The program is arguably too small considering the company's size and financial resources, and besides, it has already been completed as of June of 2016, so Alphabet doesn't have any more dry powder for share buybacks.

Why a bigger buyback would make sense

Share buybacks can be a double-edged sword, depending on the particular case. They can be a smart strategy to allocate capital more efficiently, or a corporate gimmick to artificially inflate earnings per share by reducing the outstanding share count.

When a company repurchases stock, it's basically investing in its own shares. Assuming the business has excess cash, the main factor to consider is whether the stock is a good investment or not at current market prices.

In Alphabet's particular case, the company is the undisputed market leader in online advertising thanks to its tremendously popular Google search engine business and a wide ecosystem of services and applications. Names such as Android, Chrome, and YouTube make of Alphabet one of kind in the tech industry.

No company is completely immune to competitive risk, and Alphabet is facing tough competition from Facebook (NASDAQ:FB) in online advertising. While it's only natural to expect Facebook to grow at a faster rate than Alphabet, albeit from a smaller revenue base, the industry should offer enough room for both Alphabet and Facebook to continue thriving over the coming years.

Alphabet is producing a rock-solid financial performance: It brought in $21.5 billion in sales last quarter, an increase of 25% year over year in constant currency terms. It also retained 28% of sales as operating profit margin during the quarter, a profitability ratio most other companies in the market can only envy.

Alphabet is a market leader in a growing industry, and the business is performing remarkably well from a financial perspective, so valuation looks fairly reasonable. Alphabet stock is well positioned to continue delivering attractive returns for investors going forward since the company has far more cash than it needs to keep at hand, so management would be wise to announce a new and enlarged share buyback program.