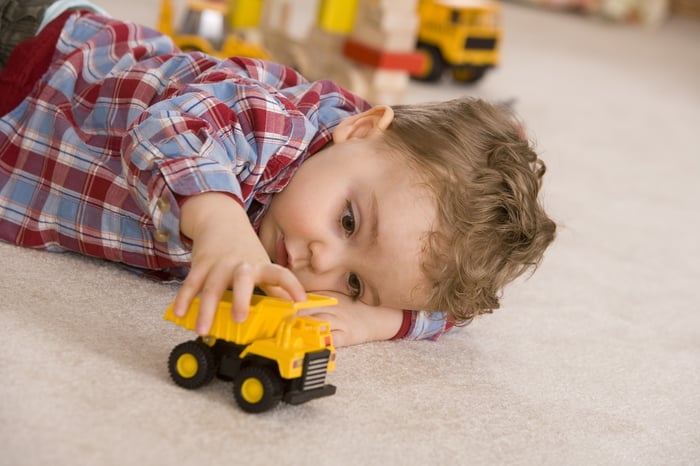 Mattel (NASDAQ:MAT) reported third-quarter 2016 results on Wednesday that suggest its turnaround is on track. The leading toy maker's revenue and earnings were flat with the year-ago period. This was an accomplishment, since it means that it has now closed the revenue gap created by losing the Disney (NYSE:DIS) Princess and Frozen licenses to rival Hasbro in 2016.

From Chief Operating Officer Richard Dickson's remarks about the reality series that Mattel and Disney-owned ABC TV Network are launching in 2017:

[The Toy Box TV series] will be an exploration ... of the trials, tribulations, and excitement around what it means to be a toy inventor and ... the entertaining process that most of the world doesn't get to see of what it takes to actually bring a creative idea to market.

[The Toy Box] represents a new platform for us to find great new product[s] and ideas around the world in an entertaining new way for the consumer and the Company.

You may have guessed the fun and familiar concept: Each episode will feature wannabe-professional toy inventors competing in various categories, striving for a place in the finale in which they'll pitch their inventions to a panel of kid judges. The winner of the competition will have his or her toy brought to market by Mattel.

We continue to work closely with the creative partners at Sony and various other experts in the industry ... to craft what we believe should be an epic Barbie story. When we have further information around what that is and when the release date will be for that movie, we will certainly be excited to share that, but at this point there's no news.

Various entertainment publications have listed a Barbie movie as coming in May 2017, as the analyst who posed a question about the topic to Mattel's top management team said. Dickson wouldn't confirm a date or anything else about the movie.

A movie based upon the iconic fashion doll has much potential to help keep her nascent rebound in sales going. (Barbie sales have increased notably year over over for two consecutive quarters in a row now.) Mattel will probably play it pretty safe with the Barbie flick, in my opinion, but it seems to me that a bolder stroke could be just the ticket for Barbie to lose some of her critics, of which she has many.

[W]e see obviously the whole vehicle category driven by a content film like Cars. Hot Wheels in particular has currently great momentum as you know, and the extension of that particular franchise using licenses to drive its relevance has been very successful.

Mattel's management believes that Disney's Cars 3 movie, slated for release in June 2017, will not only benefit it by driving toys based upon the movie to fly off retail shelves, but also by expanding the size of the entire toy vehicle category. Mattel's Hot Wheels brand is a strong performer, so Cars 3 has the potential to accelerate its already robust sales. Beyond Hot Wheels, Mattel's other vehicles brands should also benefit.

[For] American Girl, ... we saw solid turnaround in the quarter. While we did see solid results from our recent introduction of the Wellie Wishers line and the introduction of our latest historical character Melody, the third-quarter results really reflect the impact of our strategies to expand the brand's distribution.

Wellie Wishers is a brand extension of American Girl that's aimed at younger girls, with the dolls somewhat less expensive than the original line. American Girl led the moderate-to-higher priced tall doll category for many years, but has suffered in recent years as competitors poured into the space with similar lines that are more competitively priced.

The distribution expansion that Dickson is referring to includes a new exclusive store-within-a store partnership with Toys "R" Us, a new retail execution at Kohl's, and a new franchise licensing agreement to expand the brand into the Middle East.

American Girl's year-over-year sales rose 14% as reported and 15% in constant currency in the third-quarter. These results suggest the brand could be on an upswing after a long decline in quarterly year-over-year sales. One quarter, however, doesn't make a trend; the critical holiday quarter should be more telling.