One company has been completely left out of the video game industry's recent upturn. The two biggest publishers, Activision Blizzard and Electronic Arts, each posted better than 200% returns over the last five years. And yet GameStop (NYSE:GME), which dominates the retailing side of the industry, hasn't budged in that time.

The stock is down 40% in just the last year as investors worry that its growth prospects will disappear thanks to shifting industry dynamics, especially the move toward digital downloads.

GameStop has plenty going for it, though. With profit margins and net income at an all-time high, it's clear that management was right to push into complementary business lines like consumer tech years ago. In addition, income investors currently have no reason to worry about GameStop can cover its unusually high 6% dividend yield.

Still, shareholders who've endured the latest slump might consider selling their stock if the growth forecast takes another step down or if the recent profitability gains begin to evaporate.

GameStop missed its latest revenue growth estimate by a wide margin. Sales at existing locations dove by 11%, compared to the 4% to 7% decline range that CEO Paul Raines and his team had forecast. Executives knew that growth would be hard to come by given the big game releases in the prior-year period (Batman: Arkham Knight and Elder Scrolls Online) would not see comparable launches this time around.

What GameStop didn't foresee was the depressing effect that new video game device details would have on its business. The company endured a 35% plunge in video game hardware sales as device makers released fresh details on their upcoming console launches that convinced gamers to hold off on major new purchases.

Management's updated guidance implies that the slump won't last for long, as comps are forecast to be roughly flat in its fiscal third quarter. GameStop now sees full-year comps declining by 3%, versus the 2% dip they had originally projected. Another wide miss in that forecast, though, might mean the retailer has more fundamental demand and customer traffic issues to deal with. Additionally, back-to-back outlook downgrades would confirm that Raines and his executive team don't have a good reading on the industry, which won't inspire investor confidence heading into the crucial holiday shopping season.

GameStop can't do much about shifting game release calendars or the launch plans of console makers, but it does have control over where it chooses to expand. So far, its decisions in that regard have been great for the business. Gross profit margin soared to a new high last quarter -- 38% of sales from 33% last year -- as the consumer tech and collectibles segments posted outsized growth. 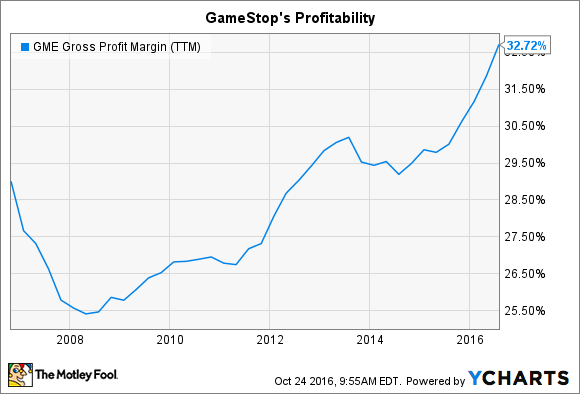 Raines argued that this was all according to executives' plan. "These new businesses offset a tough quarter for video gaming and prove that our diversification strategy is succeeding," he said in a press release.

The growth categories carry much higher margins than game hardware, GameStop's least profitable product category. And so the trade-off is one that management is happy to make. It's also a key reason why the company reaffirmed its full-year earnings outlook that calls for record profits even as the sales forecast was ratcheted back.

GameStop aims to keep its revenue roughly flat while improving overall profitability and earning power as the core video game business fades in importance. Investors who buy into that risky long-term vision get a chance at strong profit growth ahead with the current payoff of a well-protected dividend. With its core industry undergoing huge changes, though, investors should watch closely for signs that this thesis is falling apart.