Fitbit (NYSE:FIT) and GoPro (NASDAQ:GPRO) each launched a refreshed product lineup that they believe will be irresistible to shoppers this holiday season. For Fitbit, that means dominating the wearable tech market with new Charge, Flex, Blaze, and Alta devices. GoPro, meanwhile, aims to sell tons of its Hero5 cameras while making a splash in the drone market with Karma.

Both companies valuations are sitting around the $2 billion mark. Fitbit and GoPro's stock price have each fallen substantially over the last 12 months as investors worry about surging competition and sinking profit margins. But which of these out-of-favor device makers is the better bet for investors today? Let's take a closer look.

There's no sugarcoating the fact that GoPro's business is in a free fall right now. Revenue plunged by 47% last quarter (following a 49% drop in the prior quarter), gross profit margin dove by 4 percentage points to 42% of sales, and the company lost $92 million as it continued to feel the devastating effects of poor execution around recent product launches in the Hero lineup.

To buy the stock under these circumstances, investors need to feel confident that a fundamental rebound is at hand. It might be -- if you believe GoPro's management. The company is projecting a return to profitability in the fourth quarter, which CEO Nicholas Woodman says will be the company's "most exciting fourth quarter, ever." GoPro thinks the new Hero5 release will avoid the missteps that doomed the Hero4 Session even as its push into the drone market extends the brands reach.

There are significant risks to this thesis, though. The sports camera market could see weak growth, for one, and competition might also put a cap on the sales potential for GoPro's Karma drone. Investors have to balance these short-term downsides with the prospect that the device maker succeeds in staking out defensible segments in two attractive tech industries.

Fitbit's growth has also slowed sharply, falling to a 46% pace last quarter from over 100% a year ago. And like GoPro, its gross margin slumped, dipping to 42% from 47% as management ramped up development spending to defend its shrinking market share. Yet the fitness tracking device specialist remains profitable, having generated $54 million over the first six months of 2016.

Fitbit needs its latest devices to prove popular for its turnaround story to take hold. Early reviews of the Charge 2 have been favorable as tech editors applaud its larger display and new pulse tracking hardware. Fitbit is arguably more excited about the improved notification and tracking tools that aim to keep device owners highly engaged. After all, the initial sale of a Charge 2 or Flex 2 doesn't do much for the company if it isn't followed by the kind of heavy, daily use that produces loyal brand ambassadors.

The recent operating stumbles have produced cheaper valuations for both stocks. Right now, investors can buy Fitbit for a slight discount to GoPro (as demonstrated by the price to sales figures in the chart below), which likely reflects the fact that its industry is less mature and so the camera maker could produce outsized profits by holding its leadership position. 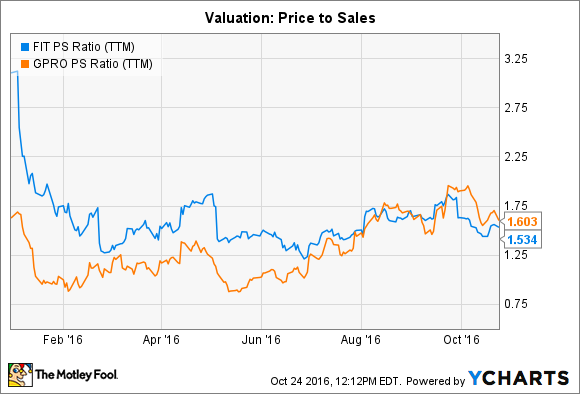 While either stock is a risky bet, Fitbit is the smarter investment in my view, given that it is already profitable and has a better track record of execution around product launches.

In either case, investors should expect volatility when the two companies post third-quarter earnings results in the first week of November and give guidance on the holiday season. Fitbit and GoPro both have strong incentives to suggest that their latest products are on track to be blockbuster hits this year, but investors are waiting for solid evidence of demand in the form of actual sales to consumers.