Just because two companies with seemingly compatible assets merge does not mean the combination will prove successful. Like any marriage, a corporate merger comes with significant risks, and while AT&T (NYSE:T) clearly believes it's doing the right thing in buying Time Warner (NYSE:TWX), the $108.7 billion deal, including net debt, comes with considerable uncertainty.

Of course, in the same way that no best man ever gives a wedding speech talking about how the union may turn out to be a disaster, AT&T CEO Randall Stephenson's remarks in the press release announcing the half-stock, half-cash deal were overwhelmingly positive.

"This is a perfect match of two companies with complementary strengths who can bring a fresh approach to how the media and communications industry works for customers, content creators, distributors and advertisers," said Stephenson, who will run the combined company. "Premium content always wins. It has been true on the big screen, the TV screen and now it's proving true on the mobile screen. We'll have the world's best premium content with the networks to deliver it to every screen."

That sounds great, but what looks good on paper does not always turn out in the way you expect. In looking at the five biggest media mergers as noted by Bloomberg, it's easy to see how the union of AT&T and Time Warner could be happily ever after or lead shareholders to wonder what happened.

Tine Warner has agreed to be purchased, but acquisitions like this don't always work out well. Image source: Time Warner.

When Walt Disney (NYSE:DIS) spent $19 billion to buy Capitol Cities/ABC, the parent company of the ABC broadcast network and ESPN, it was a case of a media company buying more of the same. The move, made in July 1995, gave the Mouse House added distribution and more content, but at the time of the deal, it already owned a number of cable networks.

The move was not an immediate success, at least for stockholders, as the share price stayed relatively flat until 2012 when it began to move staunchly upward. But while it took over a decade for the benefits of this deal to be realized, it was a very logical combination when it was announced. Disney was a creative powerhouse that would be obtaining improved distribution for its content while ABC would no longer be at the mercy of studios it did not control.

Clearly, Disney and Capitol Cities had matching assets, but figuring out how to combine the two was not so simple. ABC already aired Disney programming, so that part was easy, but merging ESPN -- arguably the crown jewel of the deal -- into the company as a whole led to some massive missteps like Disney buying a National Hockey League Team (the no-longer Mighty Ducks of Anaheim).

It could be argued that this purchase, while ultimately successful, cost former CEO Michael Eisner his job. In retrospect, that seems silly as ESPN (despite its current struggles) has turned into a cash cow for the company and owning a television network has helped drive Disney profitability. This was not a merger that worked quickly, but it has to be considered a major success. 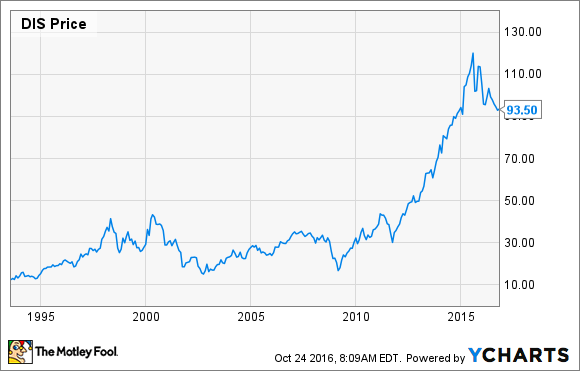 Buying ABC was not an immediate success for Disney. Image source: YCharts.com.

Now called iHeartMedia, the former Clear Channel Communications was primarily a company that owned radio stations. At the time it spent just under $16 billion to buy AMFM in October 1999, it was the third-largest owner of radio stations while the company it merged with was the largest.

The combined entity became a media powerhouse with 830 radio stations, 425,000 billboards, and 19 television stations. In theory, this should have created a company that dominated the advertising market, but people running Clear Channel had clearly underestimated just how disruptive the internet would be to radio specifically.

This deal made sense in the moment it happened and all the subsequent problems the company experienced likely would have been worse had they stayed separate. Still, it's hard to call doubling down on radio right before that market became much less lucrative anything other than a failure.

Call this the Brad Pitt and Jennifer Aniston of media mergers. It made sense and shareholders were generally happy when Viacom (NASDAQ: VIA) (NASDAQ: VIAB) bought CBS (NYSE: CBS) for $35.6 billion in 1999, and many were sad when they split up in 2006. Now, a decade or so later, both companies are single again and the public wants them to at least consider getting together.

At the time of the original merger, the media world was moving, as it is now, toward consolidation. Clearly the combination did not work as it was broken up, but matching Viacom's cable networks and movie studio with CBS' broadcast and cable assets does appear to make some sense. While the first merger failed, a second one may still happen, and the changed landscape may make things turn out differently this time.

While Comcast's (NASDAQ:CMCSA) purchase of NBC probably looms larger in most people's mind's, the company's biggest purchase was actually its $72 billion deal to buy the former AT&T Broadband in 2001. That deal gave the combined company 22 million subscribers across its various service categories and created the blueprint for the cable/internet/phone part of Comcast as we know it now.

At the time the deal was announced, Comcast CEO Brian Roberts was actually most excited about a part of the business which would eventually fade in importance.

"We are particularly excited about the telephony prospects," he said. "The size of our telephony footprint, combined with AT&T's expertise and leadership in the telephony space, will enable us to accelerate the deployment of telephone services to many new markets."

That may have been true at the time, but ultimately this deal expanded Comcast's footprint to 41 states, offering it access to tens of millions of new customers. In many cases, those were monopoly or near-monopoly opportunities that helped the company grow to its current size.

If shareholders need a reason to be concerned about AT&T's purchase of Time Warner, they merely need to look at the last time that company was purchased. That $162 billion deal, which closed in 2000, turned out to be a bad mix of corporate cultures. It was also a deal doomed by the fact that AOL's core internet business -- selling dial-up access -- was set for an epic collapse.

At the time, this merger was a new-school company buying a traditional media giant. It was supposed to represent the triumph of the internet over traditional media. Clearly, that turned out to be a failure, and when the two companies split in 2009, AOL continued its downward trend while Time Warner remained a pillar of the media business.

The AT&T/Time Warner deal now faces regulatory review and some lawmakers have already chimed in against such a merger while rivals have called for close scrutiny. Only time will tell how this goes down in the history books.