Energy Transfer Partners (NYSE: ETP) is in the midst of a major growth phase. Currently, the energy infrastructure giant has $10 billion worth of projects under development and scheduled to be in service by the end of next year. That growth pipeline is about to get a little bit bigger after the company announced that it has agreed to acquire a controlling stake in PennTex Midstream Partners (NASDAQ: PTXP), which has a growing pipeline of opportunities in northern Louisiana.

Energy Transfer Partners is acquiring certain interests in PennTex Midstream Partners from various sellers for a total of $640 million in cash and units. As part of the deal, the midstream giant will acquire 100% of the company's general partner as well as all of the incentive distribution rights (IDRs). In addition, it is buying 6.3 million of PennTex Midstream's common units and all 20 million of the subordinated units. Combined, these units represent 65% of the company's total limited partner units.

In exchange, Energy Transfer will issue 50% cash and 50% units to the sellers. It intends to fund the cash portion of the deal by issuing additional units under its at-the-market program as well as via borrowings under its credit facility. Additionally, its parent company, Energy Transfer Equity (NYSE:ET), agreed to an IDR waiver of $33 million annually that will run in perpetuity. That continues Energy Transfer Equity's support of its master limited partnership, which will see it forgo more than $1.1 billion of IDRs over the next few years to aid in prior acquisitions and the company's current growth program.

Why it wants control of PennTex

Energy Transfer Partners' desire to gain control of PennTex is twofold. First, it gains near-term cash flow from its ownership interest in the company's current assets located within the Terryville Complex of northern Louisiana consisting of a rich natural gas gathering system, two gas processing plants, and additional pipeline assets. These assets are all under long-term, fee-based gathering and processing agreements, mainly with Range Resources (NYSE:RRC), which is PennTex Midstream's primary customer.

It is a relationship that Range Resources assumed when it acquired Memorial Resource Development earlier this year, making it a key acreage holder in the Terryville Complex. As the slide below shows, Range now holds a vast acreage position in the region: 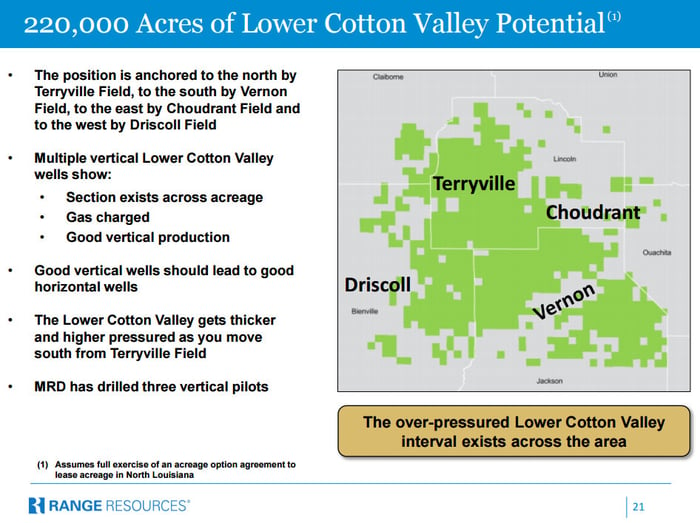 That acreage position is noteworthy because PennTex has the exclusive right to build all the midstream infrastructure Range Resources needs to support its growth in the region. Therein lies the second reason Energy Transfer is making this deal, which is the embedded growth potential as Range drives increasing volumes through the current system and eventually requires investments in additional midstream infrastructure. Overall, Range believes that it is sitting on 5 trillion cubic feet of equivalent resource potential in the Terryville complex, with the company planning to use that vast resource base as a springboard to fuel 30% production growth next year.

Furthermore, this relationship could lead to additional opportunities for Energy Transfer Partners. Because its footprint in the region is largely complementary to PennTex Midstream's assets, it could see some incremental volumes on its assets, which includes three processing plants as well as gathering and intrastate pipelines.

Energy Transfer Partners wants to make sure it still has plenty of growth left in the tank after it completes its current $10 billion project backlog. That is why it is linking up with PennTex Midstream, which has ample opportunities to expand its asset base thanks to its relationship with Range Resources. Overall, this deal should pay dividends in the near term thanks to the secured cash flows it will receive from its ownership interest, with the potential for an even bigger payout in the future as Range's growth flows over to PennTex.