Last week, American Airlines Group (NASDAQ:AAL) reported that its revenue per available seat mile (RASM) declined 2.2% year over year in the third quarter. Ideally, investors would like to see RASM growing at airlines, but this was still a much better result than either Delta Air Lines (NYSE:DAL) or United Continental Holdings (NASDAQ:UAL) could muster.

This improving unit-revenue trajectory has helped American Airlines stock pull out of a steep dive that sent it as low as $25 in late June. Indeed, the share price has rebounded by a stunning 60% in the past four months: 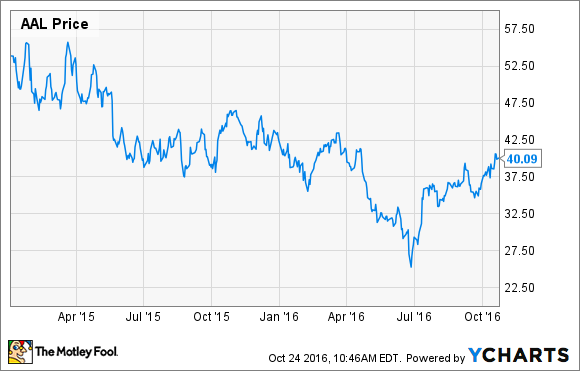 However, skyrocketing costs are a big problem. As a result, American's profitability has plunged far below that of Delta, and it now rivals United Continental for the ignominious title of least-profitable major airline. Unfortunately, the company's management isn't acting aggressively enough to get profit growing again.

In 2015, American Airlines had the highest profit margin among the three legacy carriers. A big driver of American's outperformance was its savvy decision not to hedge its fuel costs. This allowed it to pay less for jet fuel than Delta and United last year.

That fuel-cost advantage has shrunk in 2016, as hedging losses have declined for American's peers. Meanwhile, non-fuel unit costs have been rising at an elevated rate at American Airlines, due to the impact of new labor contracts that incorporated sizable pay raises.

One could perhaps blame this fall below United on the margin front in Q3 on seasonality -- and American Airlines CEO Doug Parker did just that on the company's earnings call last week. But this disparity is on pace to continue in Q4. United currently projects that its Q4 adjusted pretax margin will be 5% to 7%, compared to American's forecast of 4% to 6%.

It's all about costs

American Airlines expects its revenue outperformance to continue in Q4. But as its subpar margin guidance implies, that's not enough to overcome the drag from rising costs.

American Airlines' management has suggested to investors that this year's cost increases are the result of a one-time step-up in labor rates. Yet CFO Derek Kerr gave informal guidance last week that adjusted CASM will rise by about 4 percentage points in 2017: half from annualizing the impact of recent labor deals and half from other, more normal cost-inflation drivers.

Pilot wages are set to rise significantly at Delta and United. Image source: The Motley Fool.

Non-fuel CASM should stabilize in 2018 and 2019, thanks to slower increases in labor costs and long-awaited merger-related cost synergies.

However, cost creep may reemerge around 2020. American's pilots are locked into a contract with modest raises through 2019. The pay rates are now dramatically below market, after Delta Air Lines pilots won 30% raises in a tentative agreement reached just last month. The incremental annual cost of offering a market-rate contract could exceed $500 million.

As I have previously noted, among the three legacy carriers, American Airlines has the clearest path to return to unit-revenue growth. However, that has already been reflected in its stock price, which has recovered nicely since mid-2016 -- even as analysts have continued to slash their forward earnings estimates.

With oil prices starting to recover, even a return to low-single-digit unit-revenue growth will lead to further margin declines for American Airlines in 2017.

Considering the company's massive debt load and sizable pension obligations, American Airlines stock simply isn't very cheap anymore. Good unit-revenue results could make the stock pop in the short run, but in the long run, the company needs to maintain a double-digit pretax margin to provide strong results for shareholders. Right now, it looks like that will be hard to achieve in 2017.

Thus, I decided to use the recent rally in American Airlines stock as an opportunity to sell. Until the company's management offers a credible cost-cutting plan, I intend to stay away.