Investors can safely say that Microsoft (NASDAQ:MSFT) has successfully navigated the transition of one of its most important products: Office. This is not a new storyline. The software giant launched the subscription-based version of its flagship productivity suite half a decade ago, but there had been some initial skepticism as to whether or not Microsoft could actually pull off the switch. At the time, customers could just pay a one-time licensing fee to purchase the product for keeps (before the next major version inevitably came out a few years later).

Last week, Microsoft reported strong fiscal first-quarter results, which were primarily buoyed by strong performance in the Azure cloud infrastructure unit and continued gains with Office 365. Shares now trade at all-time highs -- even higher than the peak of the 2000 tech boom.

Nearly a third of revenue during the quarter came from the productivity and business processes segment, which saw revenue rise by 6% to $6.7 billion. On the consumer side, sales jumped 8% and Office 365 consumer subscribers continued the upward march to 24 million. This is what progress looks like: 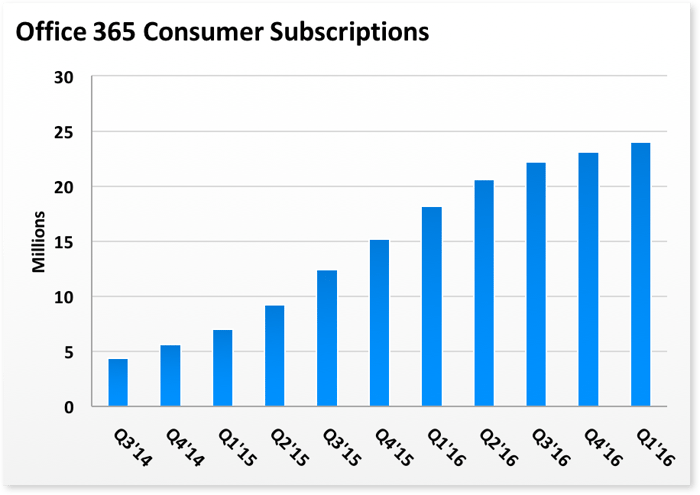 Just the way investors like most charts: up and to the right. Data source: SEC filings. Fiscal quarters shown. Chart by author.

More importantly, the commercial side is faring even better, with Office 365 commercial revenue jumping 51%. Seeing as how the enterprise is what pays Microsoft's bills, that should be music to investors' ears. The software giant now has over 85 million monthly active commercial users for Office 365, up 40% year over year. Combined with the consumer side, that puts total consumer subscribers and enterprise users at 109 million -- each paying monthly subscription fees.

Don't just take my word for it; here's CFO Amy Hood on the conference call:

We again saw higher-than-expected transactional deal volume, primarily driven by Office commercial products and our small and mid-size business segment. This quarter, the dollar volume of annuity expirations was significantly larger than the prior year, and with solid renewals from that base, we grew our commercial bookings by 18%. The larger base also drove our contracted-not-billed balance to more than $25.5 billion. Strong execution resulted in better-than-expected commercial unearned revenue of $22.3 billion or an 8% increase in constant currency.

Microsoft maintains a healthy backlog of unearned revenue, which now totals $33.6 billion if you include both the current portion and the long-term portion. As you can see from Hood's comments above, commercial comprises about two-thirds of that total.