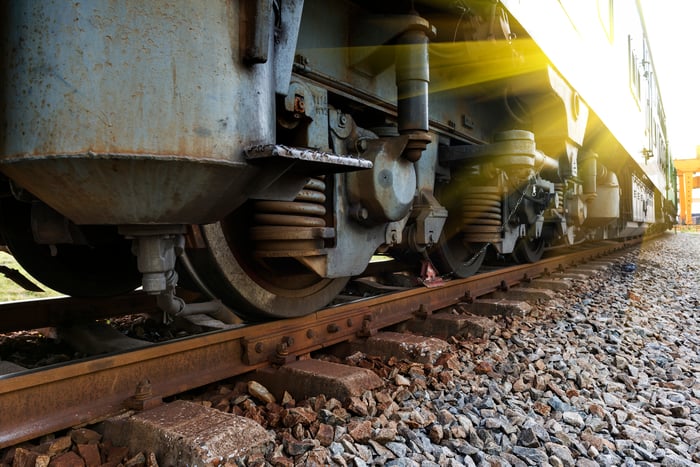 The sluggish global economy continues to impact Westinghouse Air Brake Technologies' (NYSE:WAB), or Wabtec, financial results. As was the case last quarter, the company's revenue slumped by double digits, this time taking earnings down with it. Because of those declining results, and its tepid outlook, the company is bringing down its full-year guidance once again.

The freight group continued to struggle:

CEO Raymond Betler commented on the company's results by putting them in the context of current market conditions:

Our transit business continues to perform well, while the freight markets remain challenging due to overall rail industry conditions and the sluggish global economy. We have continued to focus on controlling what we can by aggressively reducing costs, generating cash and investing in our growth opportunities, including acquisitions. At the same time, we are progressing toward completion of the Faiveley Transport acquisition and remain excited by its growth and improvement opportunities.

Betler stated that his company continues to face a pretty tough rail market and sluggish global economy. It is an industrywide issue that the CFO of industrial giant General Electric (NYSE:GE) addressed during his company's third-quarter conference call:

The difficult cycle for transportation continued in the third quarter. North American carloads were down 5.4% driven by coal lower by 14.6%, petroleum down 23.4%. Intermodal volume was down 3.6%. August and September volumes did improve versus July and are still well below 2015. We expect the trend to continue through year-end.

Because of that, GE shipped only 200 locomotives during the quarter, versus 259 in the year-ago quarter, causing operating profit in its transportation segment to sink 18%.

That said, despite these industry headwinds, Wabtec is controlling its costs and generating steady cash flow. So far this year the company tallied $257 million in cash flow from operations, which it used to repurchase shares and prepare for acquisitions, including setting money aside for the pending Faiveley Transportation transaction. The company now believes that it will close the first stage of that deal in November by purchasing the Faiveley family's 51% stake. It will then launch a tender offer for the remaining shares, which could close by the end of the year.

Due to the continued weakness in the rail market, Wabtec is adjusting its full-year guidance. It now expects revenue to decline by 12% from last year, which is down from the 10% drop it projected last quarter and well off its initial estimate that revenue would be only slightly lower year over year. Earnings guidance, likewise, continues to come down. Initially, the company expected to earn between $4.30 and $4.50 per share, but it now expects to earn only $4.00 to $4.04 per share. Notably, this guidance does not include any incremental costs for the Faiveley deal nor any additional revenue should Wabtec complete the transaction before the end of the year.