This dual-camera system is why the iPhone 7 Plus cost $20 more than it used to. Image source: Apple.

Over the past few quarters, Apple (NASDAQ:AAPL) has seen a dramatic drop in iPhone average selling prices (ASPs). This isn't entirely a bad thing, nor unexpected. The main reason for the recent decline was the launch of the iPhone SE, which starts at $400. That's the lowest price point that Apple has ever sold an iPhone for directly, even after taking into account its strategy of cascading older iPhone models down to successively lower prices. The iPhone SE caters to consumers that prefer smaller phones, as well as entry-level first-time smartphone adopters in emerging markets.

ASPs should bounce back in Q4

Given the launch, a drop in ASPs makes perfect sense. The good news is that Apple expects iPhone ASPs to surge again in the fourth quarter. For the record, Apple just reported iPhone ASPs of $619, which was a sequential improvement of $24. This trend is expected to continue into the holiday shopping season, according to CFO Luca Maestri:

iPhone ASP increased to $619 in the September quarter, which was above our expectations. That's up from $595 in the June quarter when we launched iPhone SE and we had a significant channel inventory reduction. We expect iPhone ASP to increase markedly on a sequential basis to a level similar to our ASP in the December quarter last year.

In the December quarter of 2015, iPhone ASP was $691; Apple is setting expectations that investors could enjoy a hefty jump in ASPs of around $70. Here's how iPhone ASPs have performed over the past two years. 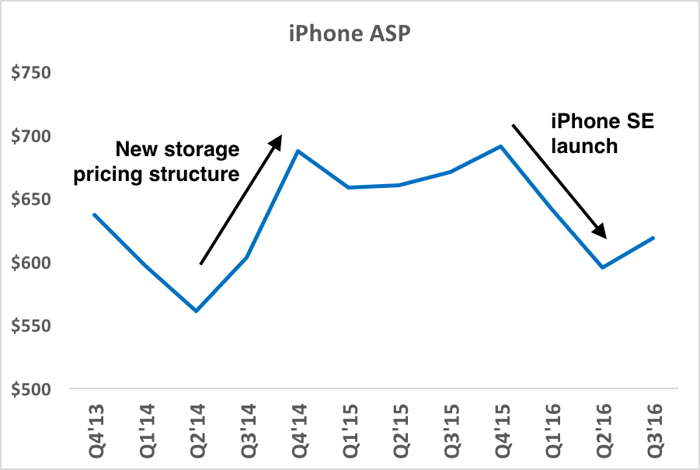 In 2014, Apple implemented a new storage pricing structure, where the first $100 step up quadrupled storage from 16 GB to 64 GB. Combined with the fact that 16 GB is paltry, the result was strong upsell activity and a subsequent jump in ASPs. Now we're giving back some of those gains for the iPhone SE.

The key to realizing such a meaningful ASP jump will be fulfilling iPhone 7 Plus demand. Apple says that while demand for iPhone 7 is already robust, the 7 Plus is off the charts and the company is having particular difficulty keeping up. It will also help that this year, Apple tacked on a $20 price bump for the iPhone 7 Plus, which now starts at $869 instead of $849. That increase may seem negligible from a consumer point of view (just 2%), which is kind of the point. It's easily justifiable for the consumer, and it will help boost ASPs to the extent that sales are concentrated on the larger model.

When asked about the $20 price increase, CEO Tim Cook attributed it to the new dual-camera system that is exclusive to the 7 Plus. Cook also reiterated that Apple's goal is always to "charge a fair price" -- no more, no less.