It's fair to say that Dassault Systemes' (OTC:DASTY) most recent earnings were not well received by the investment market. The stock's 7% decline on the day of their release tells you something went wrong in the quarter. So let's take a look at the third-quarter results and find out what actually happened.

A look at the headline numbers shows they were pretty good in the quarter:

Favorable currency movements helped out in the quarter -- revenue received a boost of 17 million euros more than expected -- but there is no way of denying that the numbers are better than expected. Moreover, the company maintained its full-year guidance, for the most part:

Don't get too excited by the hike in revenue guidance (some 20 million euros at the midpoint), as CFO Thibault de Tersant explained on the conference call that there is a 10 million-euro contribution from an acquisition, alongside the 17 million-euro currency upside from the third quarter.

However, it would be nitpicking to claim the results and guidance weren't good, so what spooked the market?

The answer probably lies with new-licenses sales growth. As you can see below, sales of new licenses (22% of sales in the quarter) are important because they lead to periodic license and maintenance sales (66%). (The remaining 12% of revenue comes from services.) 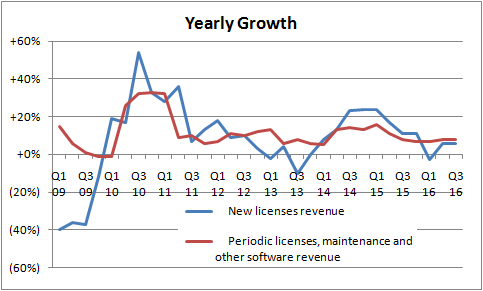 Unfortunately, sales of new licenses were below management's expectations. Revenue from new licenses increased 6% to 162 million euros, but it fell short of the target of double-digit growth given in the previous quarter's guidance.

Moreover, Dassault started the year expecting double-digit growth in new licenses for the full year, and then pared the forecast down to target double-digit growth in the second half. Now that the last two quarters have seen just 6% growth (coming after a decline of 3% in the first quarter), it's fair to say Dassault is behind schedule.

For the fourth quarter, de Tersant predicted new licenses revenue growth between 8% and 12% excluding currency effects, and the market will be keenly focused on whether Dassault Systemes can hit that range.

De Tersant discussed the matter on the conference call: "Where we came perhaps just five million euros short of our double-digit goal was in our 3DEXPERIENCE sales to large accounts. Our two indirect sales channels were well in line with our expectations while large account sales took more time."

3DExperience is a platform enabling users to navigate and access Dassault's design software as part of a collaborative interactive environment. Dassault's management argued that the solution requires a relatively long adoption process, so large companies may take longer to acquire new licenses. In addition, de Tersant pointed out that Dassault is also shifting sales toward version 6 of its 3DExperience solution, and this is causing some delays in the uptake of new licenses.

It's not often that a stock declines around 7% immediately after a company releases guidance-trumping results, but clearly investors are looking deeper than the headline numbers. In the fourth quarter, Dassault needs to deliver on new-licenses sales growth expectations in order to keep investors happy.