Some growth companies are trying to create new markets with their products or services, and others are trying to create solutions to needs that don't even exist yet. However, what if you could in invest in stocks that already fulfill an existing need? And what if that need is set to explode in the next decade? That's exactly what industrial software companies PTC (NASDAQ:PTC) and Dassault Systemes (OTC:DASTY) and machine vision specialist Cognex (NASDAQ:CGNX) are set to do in the coming years. Here's why.

If the British led the first industrial revolution (steam and fossil fuel power) and the second (electrification) saw Europe and America chime in, the third (use of automation and computerization in production) was definitely driven on an industry level by early technological adopters such as the automotive and semiconductor industries. Indeed, it's no accident that leading automaking countries Germany and Japan are home to the world's leading automation and robotics companies. 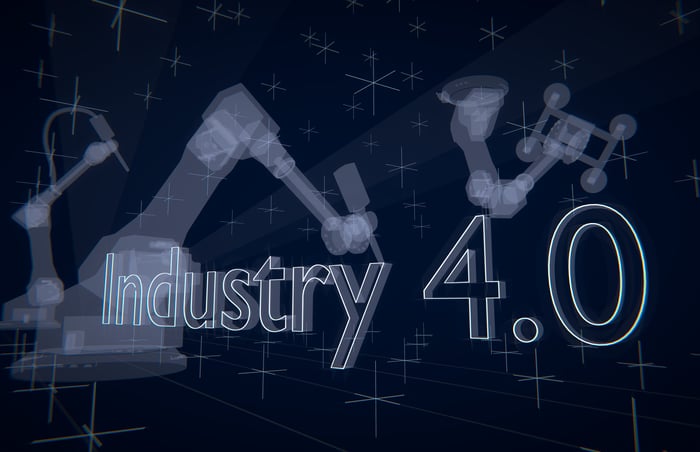 Fast-forward to the nascent fourth industrial revolution, and it's likely that the automotive and consumer electronics industries are going to adopt technologies that are going to spread like wildfire into other industries -- in fact, the evidence is that they already have.

I'm referring to the the use of the Internet of Things (IoT) web-enabled devices in order to create smart automated processes. Whereas automation adoption in the third industrial revolution was driven by its cost effectiveness as compared to human labor, the fourth will be driven by the productivity enhancements of using IoT solutions in automation. It's a virtuous circle of demand.

Indeed, it's no coincidence that General Electric's (NYSE:GE) former CEO, Jeff Immelt, was willing to bet the house on turning GE into a leader in the industrial internet. In fact, it was the key rationale behind his acquisitions and mergers with Alstom's power business and Baker Hughes: Simply add their solutions to GE's mix and GE's secret sauce of digitalization and watch them grow.

Immelt might have been undone by end-market declines, but the logic behind the strategy was sound. Indeed, GE's rival, Siemens -- a leading industrial software company in its own right --is refocusing its business toward digitalizing its automation solutions. Meanwhile, other leading automation companies such as Honeywell, PTC's partner Rockwell Automation, and Dassault Systemes' automation partner ABB are investing heavily in digital solutions.

PTC's ThingWorx platform connects a company's physical assets with the digital world -- the essence of IoT. As such, data from web-enabled devices can be fed into simulation models in order to improve the functioning of the plant.

ThingWorx is a natural addition to its existing computer-aided design (CAD) and product life cycle management (PLM) solutions. In a nutshell, companies can design (using CAD) and manage physical assets (using PLM software), which can now be connected digitally (via ThingWorx) to improve outcomes.

As you can see below, analysts believe PTC's forecasted double-digit revenue growth will lead to earnings growth of around 30% annually over the next few years. 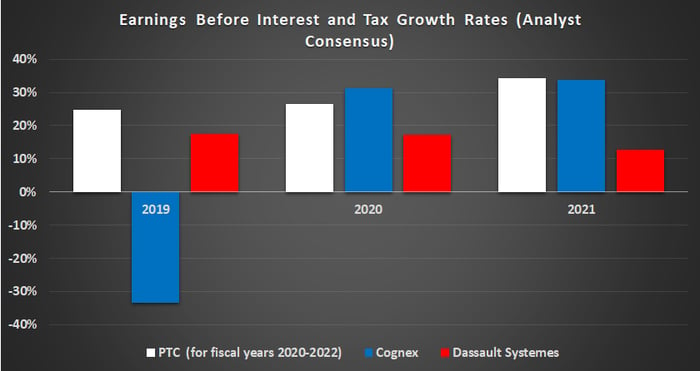 PTC's industrial software rival Dassault Systemes doesn't quite have the same near-term growth profile, but it's coming from a position of market leadership; only Siemens is close to it in terms of industrial software. Despite a slowing in the industrial sector, Dassault is on track for 13.5% revenue growth at constant currency. It marks another strong year for the company.

Leading the way is Dassault's 3DExperience platform, which allows users to create a so-called digital twin. It's simply a replica of a physical asset so companies can model and simulate performance on the digital twin in order to improve the physical asset's performance. Adoption has been impressive, with high-profile clients like Boeing, Lockheed Martin, and Toyota on board. Indeed, 3DExperience software revenue increased 32% in the first nine months of 2019 and now represents 27% of total software revenue.

If smart automation is the future of manufacturing and e-commerce logistics, Cognex's machine vision solutions are going to be a key part of the industry's growth. Cognex's solutions help monitor, guide, and identify automated processes. Despite a very difficult 2019   where Cognex's traditional exposure to the slowing automotive and consumer electronics industries,  analysts believe Cognex will get back to the kind of growth rates that management believes it can achieve.

Cognex's management believes it can grow overall revenue at a 20% annual rate over the long term, with logistics (largely e-commerce logistics) growing at 50%. It's a compelling story for farsighted investors.

Growth stocks for the next decade

All told, if the fourth industrial revolution takes off as expected, all three of these stocks will see explosive earnings growth in the coming decade. The trend toward automation is already in place, and as the depth and breadth of adoption of digital twins, robotics, and smart automation increases, it's only going to boost demand for the software that operates the industrial internet and the machine vision solutions that guide smart automation.

PTC, Dassault Systemes, and Cognex all look set for strong growth in the next few years, and growth investors should consider them for their portfolios.