In an earnings season that has seen a number of companies talking about a slowing in industrial manufacturing, project pushouts, and inventory corrections, a company that merely confirms it's on track with its previous outlook should be viewed positively. Such is the case with engineering software company Dassault Systemes (OTC:DASTY). The company's second-quarter earnings contained a mix of pluses and minuses, but overall the company looks well set to hit its objectives in 2019.

Starting with the headline numbers from the second quarter:

Turning to the full-year operating margin outlook, CFO Pascal Daloz adjusted it slightly to 32.5% from a previous range of 32% to 32.5%, citing a more favorable revenue mix with a "higher contribution from the recurring software" and currency.

All told, the headline numbers show a company on track compared with its original guidance for the year. However, there was one update that might cause some concern for investors.

The company generates around 62% of its revenue from subscription and support revenue (software) and only 11% from services revenue. But as ever with software companies, the key to its future growth prospects is its license and other software sales growth.

The chart below shows how it was another good quarter for license sales growth. 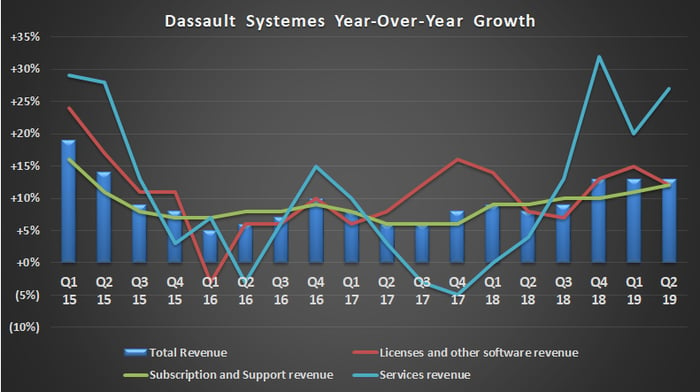 However, there was a slight reduction to management's full-year guidance. Specifically, full-year license growth at constant currency is now expected to be 9% to 11% instead of the 10% to 12% forecast previously.

Daloz put the reduction in expectations for license sales growth down to what he had previously described as "moderation" of growth for its Solidworks software license. During the earnings call, CEO Bernard Charles explained that the computer-aided design and engineering software program, which is responsible for slightly less than a quarter of software sales, "is going through a significant upgrade" and this could be causing some disruption to normal sales patterns.

It's something to watch for in future quarters.

While the slight downgrade to license sales expectations is a bit disappointing, it seems to be a consequence of the evolution of Solidworks software rather than any kind of slowdown in end demand -- what investors may have been worried about going into the quarter. As such, Dassault can probably be given the benefit of the doubt over its second-quarter and full-year guidance. Despite an uncertain economic environment, it remains on track in 2019.