Deere for its precision agriculture offerings

Deere (NYSE:DE), an agricultural and construction machinery equipment manufacturer, might not be the first name that springs to mind when looking at robotics automation stocks; however, the Internet of Things (IoT) and the increasing use of automation will be key drivers of Deere's growth in the future.

The company's core business is agricultural machinery. To be clear, a stock that operates in the farming sector will always be susceptible to the vagaries of the industry. After all, demand for agricultural machinery is driven by farmers' income and crop prices. Demand is also driven by a healthy global trading environment, and investors saw in 2018-2019 that trade conflict via tariffs on crops can impact end demand.

That said, Deere is a clear leader in the precision agriculture market. The company's solutions, which include IoT sensors, onboard computers, and telematics solutions, enable farmers to better steer and guide farming equipment. Through its automated guidance technology, farmers can collect and analyze data to improve performance while remotely managing and guiding equipment. Crop farmers can even control planting and seeding.

Take-up rates for the technology have been impressive. Management noted in its 2018 earnings call that "Recent precision hardware introductions demonstrated significant economic value to farming operations and in some cases, already achieving take rates in excess of 50%." This means that more than half of the customers able to take up the precision technology solutions are doing so. Consequently, Deere has a chance to expand sales and possibly expand margins too.

Another reason Deere deserves a look by robotics investors is precisely because it's overarching sales growth depends on things like crop prices and farmers' income. One issue with constructing a portfolio of robotics stocks is that many of the conventional names, such as ABB (NYSE:ABB), Siemens (OTC:SIEGY), Rockwell Automation (NYSE:ROK), and Cognex (NASDAQ:CGNX), tend to have significant exposure to the same end markets -- automotive and electronic/electrical are the big two in robotics. Consequently, their stock performances can be highly correlated. Deere will provide your portfolio some balance, and there's little doubt that its automated IoT-enabled solutions are the future of farming. 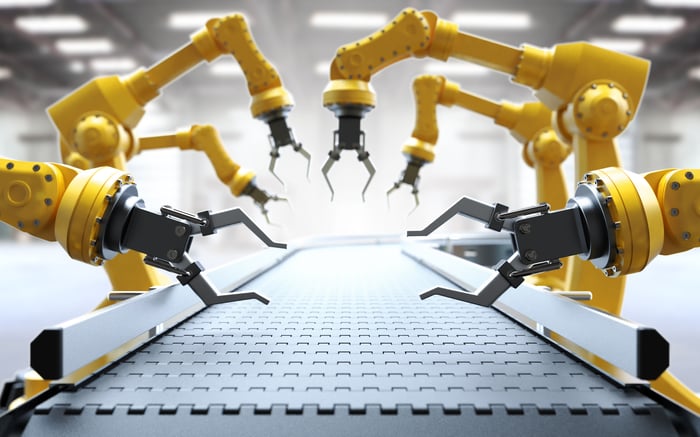 Robots need to be able to "see" and be seen too. Image source: Getty Images.

Cognex for its explosive growth potential

Cognex offers solutions that help to monitor and control robotic and automated processes. Its 2D and 3D vision solutions help to inspect, guide, and identify across a range of industries. The company is also expanding into new growth markets such as logistics (largely warehouse automation in e-fulfillment centers) and airport baggage handling.

That said, the company's key end markets are still the automotive and consumer electronics industries, both of which are early adopters of automation and robotics. For reference, Apple is Cognex's single biggest customer -- representing 20% of revenue in 2017 and 15% in 2018 -- and the automotive sector tends to be responsible for around a quarter of Cognex's revenue. If both industries turn down together, the company's sales growth will falter. That's exactly what happened in 2018-2019: Falling global light vehicle production and declining smartphone sales -- the company's machine vision is used to guide and monitor the bonding of smartphone displays -- hit the company hard, and sales growth turned negative.

It's clear that investing in Cognex is also about taking a view on the automotive and consumer electronics industries -- at least it will be that way in the near term. That's something to consider if you are constructing a portfolio of robotics stocks including names like Siemens, ABB, Rockwell, and Japan's Yaskawa (OTC:YASKY). These companies all have significant exposure to the same industries. Indeed, over the 18 months from January 2018, all these stocks lost money for investors, ranging from 25% for ABB to 14% for Siemens. 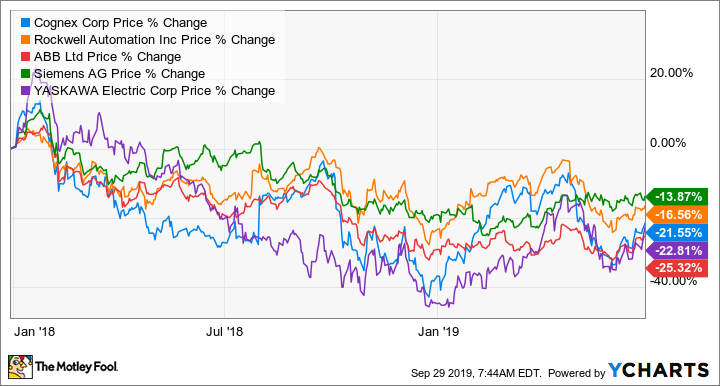 What makes Cognex a better long-term investment than the rest? In a nutshell, Cognex has more explosive growth prospects. All it will take is a few large consumer electronics deals -- such as the deals with Apple -- and Cognex's revenue and stock price will soar.

Meanwhile, management believes it can grow its factory automation revenue at a 20% annual rate over time and its logistics-based revenue at a 50% annual rate for the foreseeable future. Meanwhile, the increasing penetration of robotics into food and beverage, life sciences, and pharmaceuticals will provide growth opportunities over time.

As the market leader in its niche, Cognex is well placed to benefit.

KION Group for its robotics automation and e-commerce exposure

KION Group (OTC:KIGRY), the German forklift truck maker and warehouse automation company, might not sit at the top of most U.S. investors' lists of robotics stocks to buy, but consider the following corollaries from two related companies. First, we've already seen how Cognex is growing its logistics-based revenue (largely e-fulfillment centers) at a 50% annual rate. Second, if you talk to Honeywell International's (NYSE:HON) CEO Darius Adamczyk, he believes the acquisition of materials-handling company Intelligrated "will turn out to be probably the best acquisition that we've ever done," with the company reporting a string of double-digit orders growth since it was bought.

However, Intelligrated is only a small part of Honeywell's earnings, and logistics only makes up around 10% of Cognex's sales at present. So if you want a company with larger exposure to warehouse automation, then Germany's KION might fit the bill.

There's little doubt that spending on robotics automation in the warehouse environment is being driven by e-commerce growth and the need to create distribution centers to facilitate it. Indeed, e-commerce leaders like Amazon (NASDAQ:AMZN) continue to make high-profile investments in warehouse automation.

But here's the thing. KION bought Dematic around the same time Honeywell bought Intelligrated, and Dematic is actually the market leader in automation systems. In fact, the company's supply chain solutions segment (which Dematic is now part of) generates around two-thirds of its revenue from the U.S., and nearly 50% of the segment's revenue comes from the e-commerce end market.

The other, far larger segment is industrial trucks and services, which comprises electric warehouse trucks (58% of the segment's revenue), electric forklifts (26%), and internal-combustion forklifts (16%). The company claims to be the No. 1 in Europe and the global No. 2 -- although only 19% of the segment's revenue comes from outside of Europe. Given that the industrial truck market has historically grown at 1.5 times the growth rate of the global economy (measured in terms of global gross domestic product growth), it's reasonable to expect solid growth in the future, especially as e-commerce growth will drive capital spending on warehousing.

Moreover, the stock is hardly expensive. For example, the stock has traded on a price (Germany listing) of around 48 euros in 2019 (giving a market cap of around 5.6 billion euros). Based on consensus analyst forecasts, the company is set to trade on a price-to-earnings and price-to-free-cash-flow ratio of less than 10 in the next few years. That looks like a good value for a company with such attractive long-term prospects. 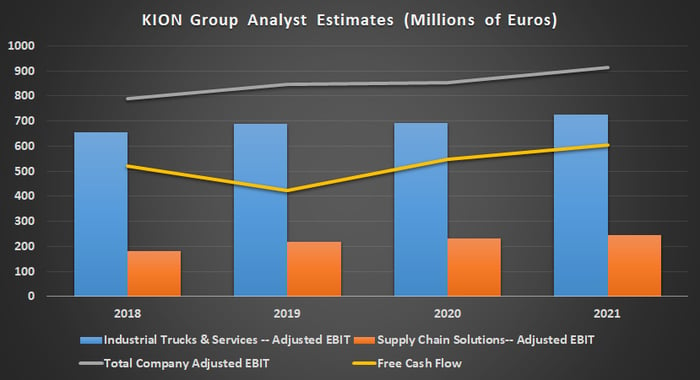 If Cognex is the growth stock option and KION is the value play, then Zebra Technologies is the growth-at-a-reasonable-price, or GARP, option. Zebra's mobile computers, scanners, and barcode printers are an essential part of making industrial automation and robotics work in the warehouse.

In fact, the increasing penetration of IT and web-enabled smart automation in the retail, logistics, and manufacturing world means that there's even more of a need to capture and analyze data. That's where Zebra's products come in. For example, its mobile computers and RFID capture data in real time and allow companies to see how the asset -- in this case, robotics automation -- is working in order to improve its productivity. Zebra's products even help improve the productivity of NFL players, thanks to its RFID tags attached to player equipment recording real-time data.

Management expects the company to grow organic sales at a 4% to 5% annual rate over time, but as you can see in the chart below, the company averaged significant 6.2% growth over the 2015-2019 period. 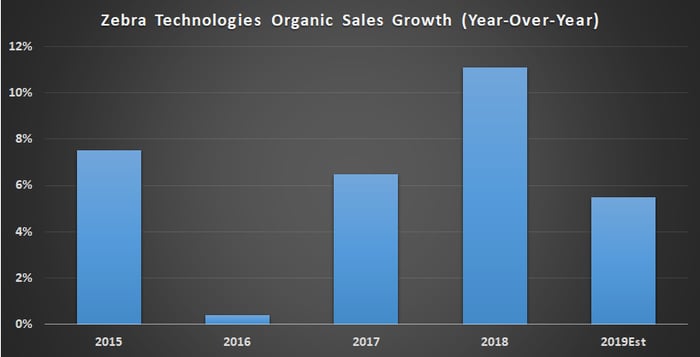 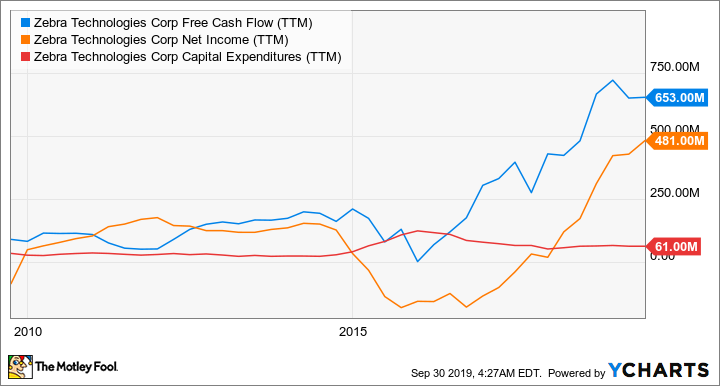 As long as the trend toward connected enterprises and smart robotics automation is in place, Zebra should benefit from the opportunity to help companies maximize the potential of their assets.

So far, these companies have focused on either using automation to improve customer offerings (Deere), adding supplementary technology to automation (Cognex), or plays on the growth of smart automation and the Industrial Internet of Things (KION and Zebra Technologies). But what about the critical role that industrial software companies are set to play in the so-called fourth industrial revolution?

Simply put, the first industrial revolution involved using steam- and fossil-fueled power (railways, etc.); the second introduced electrification; and the third, which began in the 1970s, involved the increasing use of computers and automation. However, the fourth revolution might prove to be the fastest growing yet. In a nutshell, Industry 4.0 is all about using web-enabled devices to create smart automated processes. So the industrial software that manages the life cycle of the physical asset (product life-cycle management, or PLM) and/or the ongoing running of the asset (manufacturing execution systems, or MES) at a local level is going to be critical to the process.

For example, consider the digital modeling of a power plant or factory when its being designed (PLM). If the process can help the operator start to understand and model the working of the plant/factory before the factory is delivered by the engineering contractor, it can result in the plant/factory running at full capacity earlier than it otherwise would -- saving the operator millions of dollars in the meantime.

Meanwhile, MES software working on a plant level can significantly improve the productivity of a physical asset. For example, sensors can monitor and accumulate data on the running of power equipment in order to predict when a turbine needs to be serviced -- helping to reduce costly outages and improve turbine efficiency. For those interested, Aspen Technology (NASDAQ:AZPN) is an example of an MES software company.

Dassault Systemes for its PLM leadership

The recent deal between ABB, one of the largest robotics companies in the world, and Dassault Systemes is set to drive significant adoption of digital technologies, including Dassault's 3DExperience platform and industrial design software.

Dassault's 3DExperience platform creates a digital environment whereby companies can create a "cohesive digital innovation environment that delivers digital continuity from concept to manufacturing to ownership and back." Of particular note: 3DExperience can be used "to create a digital twin that captures insights and expertise from across their entire ecosystem, to measure, assess and predict the performance of an industrial asset."

In case you are wondering what a "digital twin" is, it's simply the digital replication of a physical asset. The beauty of it is that the digital twin can have simulations run on it in order to better understand and manage the physical asset. ABB itself has been an early adopter of 3DExperience, and both companies made factory automation and robotics the initial focus of their partnership.

Constructing a portfolio of robotics stocks

Investors who are looking for overall robotics exposure without trying to pick out individual stock winners might want to buy a robotics ETF such as the Robo Global Robotics and Automation Index ETF (NYSEMKT:ROBO). The ETF holds all the robotics stocks discussed in this article, but as noted above, buying into such an ETF will likely give you heavy exposure to the automotive and electronic/electrical industries -- no surprise since they are the early adopters of robotics and automation. That's fine if you want, but many investors might prefer to be more diversified in their end-market exposure.

The following table helps you with that process. The table outlines the strengths, weaknesses, opportunities, and threats of these stocks -- a so-called SWOT analysis of leading stocks to play the the robotics theme.

As you can see in the chart, there's a pretty good mix of end-market drivers in the five stocks, but they all benefit from the overarching theme of increasing adoption of robotics and automation in a connected environment. If that theme continues to be a winning one, investors could be looking at more multibag returns. Investing in robotics stock should be a serious consideration for any long-term investor.