Please ensure Javascript is enabled for purposes of website accessibility
Log In Help Join The Motley Fool
Free Article Join Over 1 Million Premium Members And Get More In-Depth Stock Guidance and Research
By Lee Samaha - Aug 26, 2019 at 9:10AM

It's been a difficult year for the agricultural machinery equipment maker, but its long-term prospects look good.

Investors might have mixed feelings about the events surrounding Deere & Company (DE 2.12%) in 2019. On the one hand, the agricultural equipment machinery maker has had to progressively lower its full-year earnings guidance through 2019. On the other hand, many of the issues (which could turn out to be near-term ones) are due to a confluence of events beyond Deere's control.

Meanwhile, the company has demonstrated good progress in improving its long-term growth prospects. Given that, is now a good time to be buying Deere stock? Let's take a closer look. A Deere tractor in the middle of Dresden. Image source: Author.

It's never good news when a company cuts guidance, and as you can see below, Deere's management has already cut its full-year 2019 guidance twice this fiscal year. As a reminder, Deere's fiscal year ends in October, so the guidance given recently in August was on its third-quarter 2019 earnings call.

It's all the more disappointing because this was supposed to be the year when Deere started accelerating the growth of its large agricultural equipment sales in the U.S. again and built on the recovery in revenue and net income that started in 2016. 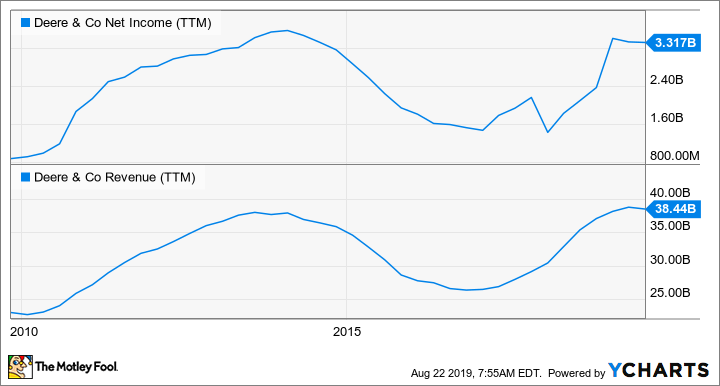 In a nutshell, Deere's end demand improved thanks to a combination of a replacement cycle kicking in and the development of its precision agriculture offerings -- solutions that make Deere an underestimated play on the Internet of Things (IoT). Moreover, these growth drivers don't include the possibility of crop prices improving following a difficult period since 2013, characterized by extremely favorable growing conditions.

It's important to note that, in the confusing world of agriculture stocks, bad weather usually means lower harvests, which usually leads to crop prices rising. Farmers are then induced to plant more crops and spend more on agricultural machinery from Deere-- more on this point later. 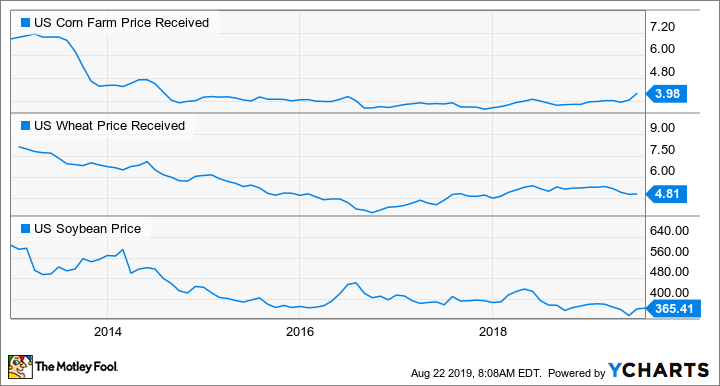 Unfortunately, the optimism around the stock going into the spring led to disappointment in May as few events came together to impact Deere's near-term outlook.

Speaking on the recent third-quarter earnings call, CFO Ryan Campbell identified three issues: "Unfortunately, North American customer sentiment has since deteriorated, not only due to uncertainty over market access but also due to weather and the demand impact of African swine fever." Let's unpack these in turn.

By "market access", he's almost certainly talking about the impact of trade tensions -- specifically the export market for U.S. crops like soybeans in the wake of China's imposition of tariffs. However, there's a strong case for arguing that tariff fears are overblown. After all, if China is buying more crop from, say, Brazil, then U.S. farmers can sell to the countries that Brazil might have sold to.

Indeed, the United States Department of Agriculture (USDA) reports that the spread between the soybean export prices of the U.S. and Brazil has now closed after blowing up to a 30% premium for Brazil last summer -- that's a sign that U.S farmers are able to sell into new markets.

The weather issue is somewhat nuanced. Poor weather will obviously hurt Deere's near-term outlook, but if it leads to a lower harvest and ultimately higher crop prices it could actually be good news for future equipment sales. Indeed, this is probably the reason why the stock rallied in the summer, only for some negative sentiment to return after a USDA world agricultural supply and demand estimates (WASDE) report came out that was more bullish for the U.S. wheat and corn harvest. See what I meant about the confusing world of agriculture stocks?

The third issue, African swine fever in China, is more serious. China's pig herd has fallen by a third -- meaning a decline in demand for soybean meal -- and scientists are frantically trying to create a vaccine.

What should investors make of it

The weather is extremely hard to predict, and making microscopic adjustments to buying and selling stock on the back of one season's weather or a USDA report doesn't seem like a winning strategy. In addition, fears over the impact on the trade war on Deere are probably overdone, and history suggests the outbreak of Africa swine fever will eventually be contained.

That said, investors wanting to buy the stock to take advantage of the company's long-term growth prospects -- not least from its IoT technology -- will have to be willing to ride out the near-term threats to Deere's earnings from the three issues identified.