The company faces near-term risk from trade dispute-related issues, but should that deter long-term investors? Here's the lowdown.

It's a classic investment conundrum: How comfortable do you feel buying a stock with some near-term earnings risk, but strong long-term growth prospects? That's the question facing potential investors in Deere (DE 2.62%) right now. Let's take a closer look at what's going on with the company in 2019 and the investment proposition overall.

Soybeans are one of the key battleground issues in the U.S./China trade conflict. That matters for Deere, because a loss of revenue from exports to China could cause U.S. farmers to buy less agricultural equipment. As such, Deere is seen as one of the companies under threat from a protracted trade dispute.

Indeed, there's evidence that Deere is already seeing some impact. For example, during the company's first-quarter earnings call in February the Manager of Investor Communications, Brent Norwood, noted that "uncertainty has weighed on farmer sentiment throughout the year" and "the market uncertainty has resulted in some U.S. farmers temporarily pausing equipment investment decisions." As such, early order "programs sales momentum observably shifted in reaction to external factors such as the rise of global trade tensions," according to Norwood. 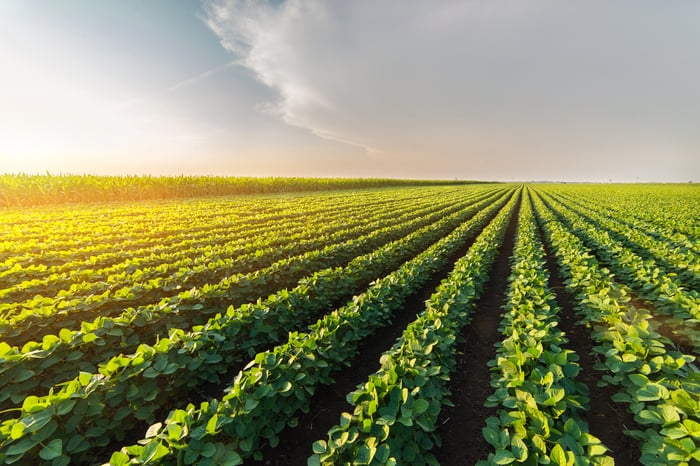 Soybeans are one of the key battlegrounds in the U.S./China trade dispute. Image source: Getty Images.

While management's commentary is uninspiring, full-year guidance was maintained, with full-year U.S. & Canada sales still expected to grow in the 0%-5% range. The only change was that margin in the agriculture & turf segment is now expected to be 12% compared to a previous forecast of 12.5%. For reference, the agriculture & turf segment contributed 76% of total equipment operating profit in 2018 with operating margin of 12.1%.

However, on the whole, full-year guidance was maintained, and total company net sales are still expected to increase 7%, with net income still expected to be around $3.6 billion, representing a 17% increase on last year. Deere is seeing improving trends in sales of smaller agricultural equipment and countries like Brazil.

Check out the latest earnings call transcript for Deere. That said, if Deere is seeing some hesitancy in large equipment orders from farmers due to the trade conflict and upheaval in the soybean market, then it's reasonable to fear more of an impact in the future if trade friction continues. In other words, don't be surprised if Deere has to lower near-term guidance.

The key question is whether the impact of the trade dispute is going to be a temporary or permanent one. If it's the former, then long-term investors are likely to simply brush off any lowering of guidance as a mere blemish on an attractive bigger picture. If the latter, then Deere could be challenged by a structural problem for years to come.

When answering a question on the matter during the earnings call, CFO Raj Kalathur expressed his belief that "trade flows will reroute," while Director of Investor Relations Josh Jepsen argued that " We've seen more of our soybeans go into places like Europe, like Egypt, former Brazilian trade partners."

In a nutshell, management's argument is that U.S. soybean exports will simply go elsewhere now that China has imposed sanctions on imports from the U.S.

For example, customers that were regular buyers of Brazilian soybeans, which now go to China in place of American exports, will now buy from the U.S. in order to fill the gap.  It's just one of the reasons why fears over tariffs are overblown.

Why Deere's management is right

Fortunately, there's evidence to suggest that Deere's management is right. For example, when the tariff issue hit in the summer, the spread between Brazil and U.S. soybean export prices blew up to around $100 a ton from the normal spread of a few dollars. However, the latest data from the United States Department of Agriculture (USDA) shows that the spread has closed to normal levels since the end of the 2018. In fact, the latest USDA data indicates that U.S. export prices are now higher than Brazil's.

Moreover, the drop in demand from China has been partly offset by increased demand from other countries. For example, the USDA points out that U.S. soybean export commitments (defined as outstanding sales plus accumulated exports) to China at the end of February were just 9.4 million tons, compared to 27.7 million tons a year ago. However, total commitments to the world were 39 million tons, compared to 48 million a year ago.

Meanwhile, as Norwood pointed out, "three of the four major crops are expected to be higher in the 2018-2019 marketing year than in the previous year." For reference, he's referring to corn, wheat, and cotton. In fact, Deere is forecasting that U.S. farm cash receipts will increase by a few billion to around $390 billion.

There's strong evidence that U.S farmers are "filling the gap," and in the long-term Deere has good growth prospects thanks to its precision agriculture solutions -- the company is also an under-appreciated play on the Internet of Things.

Deere may well be forced to cut near-term guidance due to the upheaval caused by trade conflict, but that's probably not something that long-term investors should be worried about because U.S. farmers are already opening up new trade routes for soybeans. All told, Deere remains an attractive stock for long-term investors.