The bull vs. bear case for Deere and why China's tariff actions aren't a complete disaster for the company.

At the time of this writing, Deere & Company (DE -0.08%) stock is down 6% on a year-to-date basis as the bull vs. bear debate rages over the stock. Let's take a closer look at the key arguments on both sides and, in particular, focus on the bearish argument that the company is set to be significantly impacted by trade disputes and tariff actions.

The key part of the bullish case for Deere stock in the near to medium term is that the company's forecast for a 15% increase in its full-year key agriculture and turf segment (74% of the recent profit from equipment sales) is due mainly to replacement sales, rather than any pickup in farmers' income and/or crop prices. In other words, there remains substantial upside possibility given any increase in crop prices. 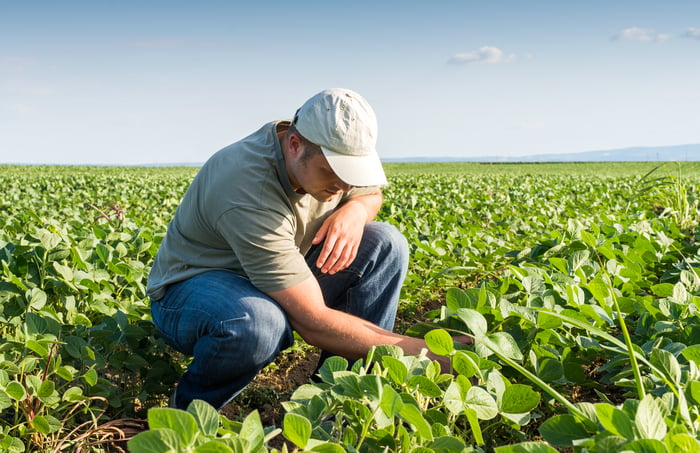 In addition, the Wirtgen acquisition (global leader in road construction equipment) will diversify its end markets and give Deere exposure to any growth in infrastructural spending.

That's the near- to mid-term view, but thinking medium to long term, Deere has growth prospects from the increasing use of precision agriculture -- think of Internet of Things sensors, onboard computers, and telematics. Indeed, Deere is already seeing strong uptake of many of its leading precision agriculture technologies, and there's evidence to suggest it will boost margin as well as sales growth.

What the bears are afraid of

It's not hard to see the case for the bears. It comes from three factors, with the first two being closely related. The trade dispute and subsequent tariffs on agricultural commodities threaten the income of U.S. farmers, with the largest impact felt among soybean farmers.

Before the tariffs (a 25% duty) China used to buy around a third of U.S. soybean production, but by Nov. 1, "U.S. export sales commitments of soybeans to China had plummeted 94 percent from a year earlier," according to the United States Department of Agriculture (USDA).

The tariff disputes are also increasing steel prices and Deere CEO Samuel Allen is on record as saying that rising steel prices could cause the company to look at switching materials from steel.

The third concern comes from the increase in freight costs coming from the elevated expenses of trucking due to demand exceeding supply in the industry -- at least in the near term.

The last two factors relate to costs and they have definitely had an impact on Deere in 2018. In fact, management started its fiscal year predicting its cost of sales would be 75% in 2018 , but by the third-quarter earnings report in August, it had increased it to 76% due to "higher production costs such as freight and material costs and higher incentive compensation costs," according to Manager of Investor Communications Brent Norwood on the earnings call.

Obviously, this is a negative, but the magnitude of the cost increases is likely to fall or even turn negative on a year-over-year basis, as economic growth slows next year and demand for steel and trucking should abate.

Moreover, Deere has more than offset the cost increases in 2018 partly thanks to increases in its large agriculture equipment sales outlook in the U.S. At the start of the year, management forecast net sales would increase 22% and net income would come in at $2.6 billion, but guidance currently is for a 30% increase and adjusted net income of $3.1 billion.

As noted above, the impact on soybeans has been significant for U.S. farmers, but while discussing the 2019 outlook, CFO Raj Kalathur said that "the crop fundamentals would actually strengthen for double crops like corn, wheat, cotton which outweigh soy situation."

But despite the soybean issue, Deere has actually increased its forecast for U.S. farm cash receipts from crops to $188.8 billion from $187.6 billion forecast at the start of the year.

A second bullish counterargument points out that the situation with soybean is highly dynamic and could change in line with political and/or market action. For example, it's possible that the U.S. and China could agree to reduce trade tensions and back away from tariffs.

Similarly, while China's tariff actions have reduced demand for U.S. soybean, China has been buying more from countries like Brazil and Argentina. Indeed, the closely followed spread between export prices of Brazil and U.S. soybean has blown out -- meaning that any other country buying soybean from Brazil rather than the U.S. is acting irrationally. Consequently, U.S. farmers are helping "fill the gap" from China buying more soybean from Brazil, by increasing their sales to other countries.

In addition, the relatively low cost of U.S. soybean has meant U.S. "processor margins have remained high." And the "2018/19 crush is forecast up 10 million bushels this month to 2.08 billion based on robust export sales of soybean meal." According to the USDA, if the tariffs persist and the competitive position of U.S. processors persists, then this could lead to a further support for U.S. soybean.

The takeaway for Deere investors

There's no doubt that the increased freight costs and tariff impacts have been a negative for Deere in 2018, but overall the fundamentals have improved for Deere this year. Furthermore, the tariff fears, although tangible, are overblown given the current situation.

China has taken a direct aim at U.S. soybean farmers and ended up paying a higher price for soybean than it would have ordinarily. Meanwhile, U.S. soybean farmers are starting to find new markets and helping deal with a difficult situation -- good news for Deere -- and the improving outlook for wheat, corn, and cotton means Deere can have another good year in 2019.

3 Ingredients That Make Up Deere's Secret Sauce for Growth

Where Will Deere Be in 10 Years?

Is Deere Stock a Buy?