The TJX Companies (NYSE:TJX), parent corporation of T.J. Maxx, Marshalls, and Home Goods "off-retail" stores, is off 10% after posting a great quarter of growth and beating estimates. Are shares of the merchandise discounter a value at these levels? With the all-important holiday shopping season right around the corner, it's worth taking a look. 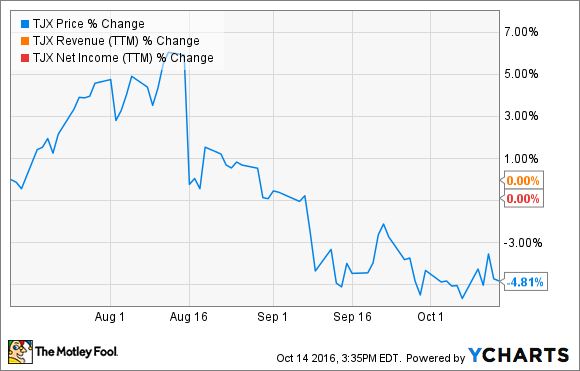 Another strong quarter, but new debt on the books

TJX released second-quarter results back in August, and business exceeded management's expectations. Through the first six months of 2016, revenue is up 8.4%, profit rose 1.4%, and comparable-store sales increased 6% driven mostly by more foot traffic than last year.

The great quarter tops several years of strong sales and bottom-line growth. Despite this the stock took a 5% step backwards on the news. Upon digesting the numbers, it's clear that the disappointment came from the fact that the advance was not as strong as in years past. 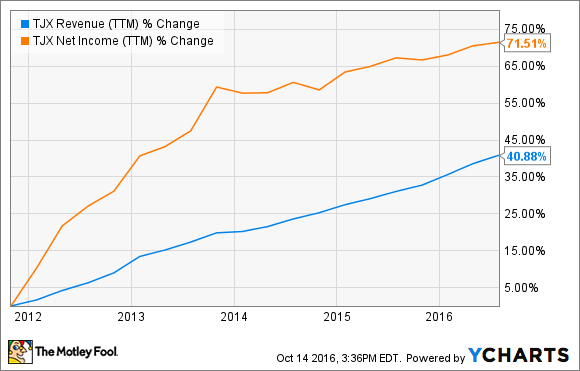 The drop in shares was aggravated further when it was announced that new debt totaling $1 billion at 2.25% would be issued in mid-September. The company will use its new capital to pay off $375 million in debt due in 2019 that carries a 6.95% rate, and the balance for general purposes. The new loan is due to be paid back in 2026.

Investors shouldn't get hung up by the past couple of months, though. The numbers for TJX are far better than the 0.1% sales decline from the average brick-and-mortar merchandiser thus far in 2016. Internet retail has been eating the lunch of many traditional stores as convenience and competitive pricing moves an increasing number of shoppers to opt for online purchasing.

The TJX Companies have not only staved off the onslaught, but they have also continued to grow. Where other retail chains have been playing catch-up with their online peers, the TJX family has thrived by primarily growing its "off-retail" footprint. Value has been a winner so far, and the plan isn't about to change.

The TJX Companies now operates over 3,600 stores in nine countries in North America, Europe, and Australia. After breaking ground in Austria, the Netherlands, and Australia in 2015, the company is confident that its brand of designer fashions on the cheap can be taken to more markets down the road.

However, management feels there is plenty of room for expansion within its current geographic presence and with its current brands -- which cover primarily clothing, furniture, and home accessories. The current number of stores in the TJX group makes it the world's largest off-retail discounter, but the company sees room for another 2,000 locations just in current markets of operation.

Europe also represents a high-growth market. Even though TJX brought its brands to the continent 20 years ago, the company is still the only brick-and-mortar off-retailer in operation. Management sees total locations in Europe along with the newer Australian market eventually doubling from the current 530 storefronts to over 1,100.

In the age of digital purchasing, where convenience and price competition are the name of the game, it's hard to get overly enthusiastic about physical store retailers. The TJX Companies, though, with their eclectic collections of home and clothing fashions at steep discounts, have been able to stave off online-only competition.

When a company stock that has been growing and has a plan to continue that trajectory pulls back 10%, it's time for value investors to take notice. With news out of TJX's corporate headquarters remaining positive, the recent decline in share prices looks like a good buying opportunity to me.

Is the TJX Companies a Good Value? @themotleyfool #stocks $TJX Next Article
Current