One of the negative storylines to emerge from Apple's (NASDAQ:AAPL) fiscal fourth-quarter earnings release last night was a notable plunge in Greater China revenue. Sales in the Middle Kingdom plunged an alarming 30%, which is sure to illicit negative gut reactions. I'm a big believer in context, since context can help you assess relevance. And the broader context here is that Apple's long-term trajectory in China is still heading in the right direction, and the short-term decline is mostly a consequence of a tough comp.

For starters, here's Apple's quarterly Greater China revenue over the past three years. 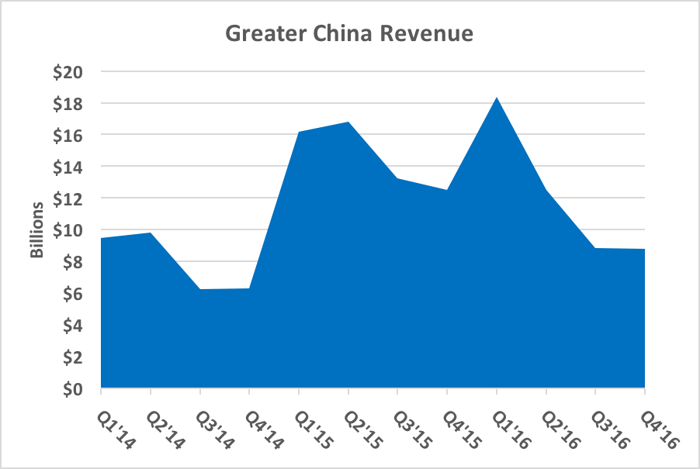 There's quite a bit of seasonality built in there, and CEO Tim Cook suggests that investors zoom out a little bit:

Look at the full year of 2016, we were down 17% compared to the fiscal year 2015, which was up 84% from the previous year. So if you look at 2014 to 2016, the revenue grew 52% and the CAGR was 23%, which is really a pretty good result. Also as you probably know, the fiscal year 2016 performance was hurt by the devaluation of the currency, which affected it about 3%, so the underlying business performance was 14% down.

And so, why was it down? There's lots of reasons, but the largest one in our view is that when you look at what happened in 2015 in China, we had a surge of upgraders that came into the market for the iPhone 6 or iPhone 6 Plus, and the upgrade rate increased relatively more in Greater China than elsewhere around the world. And so when that upgrade rate in fiscal year 2016 returned to a more normal upgrade rate, which would be akin to what we saw with the iPhone 5S as a point, it had further to fall. And so that's the main reason in our view that you see a difference.

So let's zoom out, but more than a little bit. 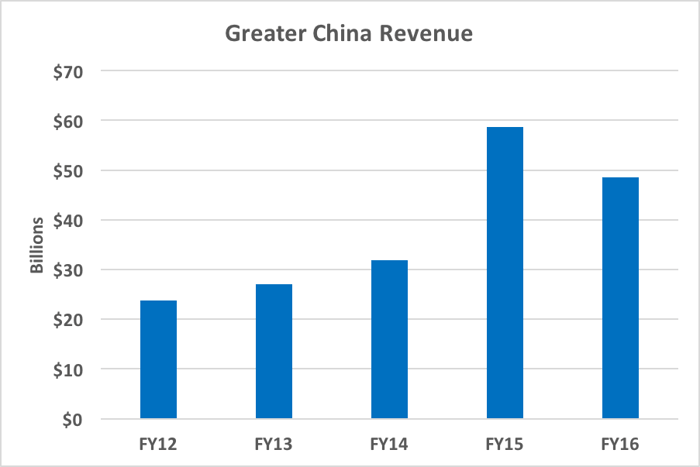 Ignore the year-over-year comparison for a moment. We're talking about a geographical operating segment that brought in $48.5 billion in fiscal 2016. Sure, that's down from 2015, but it's way up from fiscal 2012 or prior years. I used to track Apple's Greater China revenue before it began officially disclosing it as a separate segment, by triangulating data points and management comments from conference calls. It may shock you to learn that in fiscal 2009, just seven years ago, Apple brought in less than $900 million in Greater China revenue.

And look where Apple is today. Not so bad now, is it?