One of Apple's (NASDAQ:AAPL) greatest strengths has always been its financial discipline when it comes to research and development expenditures. The Mac maker's R&D investments were so efficient that it was spending a very small percentage of revenue on R&D, while new products drove incredible revenue growth. It used to be common for R&D to be between 2% and 3% of sales (at times even under 2%), while peers would spend double-digit percentages of revenue on R&D.

What we've seen in recent years is a precipitous rise in Apple's R&D budget as a percentage of sales. 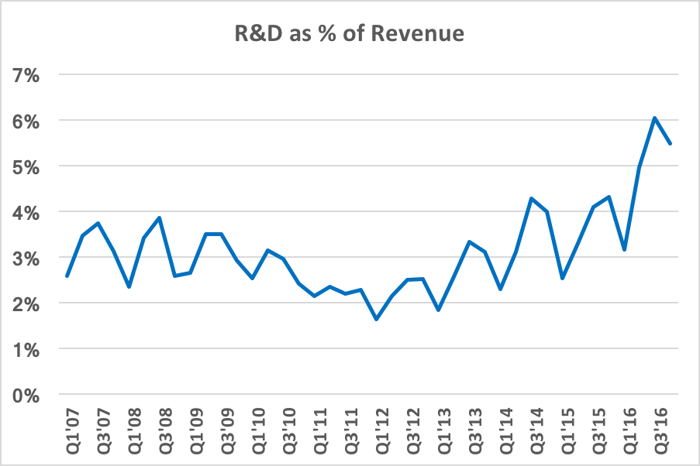 At least one Street analyst is a little worried.

But not too worried

Huberty: That's great color. Thank you for that. A follow-up for Tim. What should we read into the fact that R&D has more than doubled over the past three years while sales growth was sort of a fifth of that? Are R&D investments just less efficient than they were in the company's history, or should we think about that as incremental spend for products that haven't yet come to market?

Cook: There's clearly some amount of R&D that are on products that today are in the development phase that have not reached the market, and so that's a part of it. And we feel really great about the things that we've got. We've also put a lot of emphasis on our services business as well and on making the ecosystem even better. And so we're very much, we're confidently investing in the future, and that's the reason you see the R&D spend increasing.

Cook's answer is an expected one, as Apple is naturally investing heavily in various areas that it won't talk about quite yet, such as augmented reality/virtual reality, autonomous cars, and more. For reference, here's a chart of the two growth rates that Huberty is looking at. 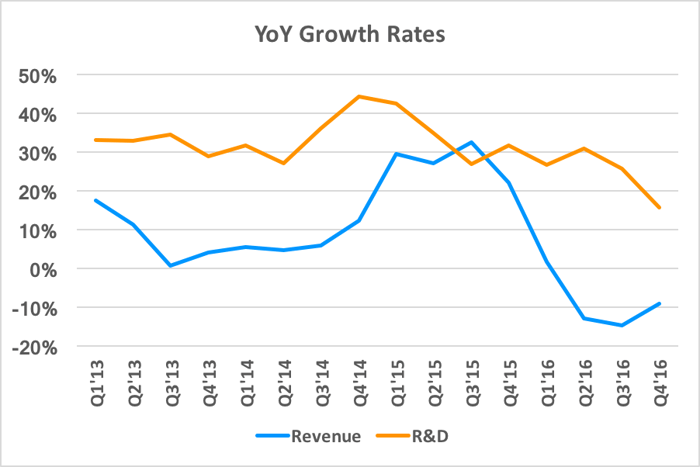 When it comes down to it, the real issue isn't whether or not R&D growth outpaces sales growth. Those percentages without the context of absolute values don't paint the full picture. Huberty is right to pay attention to an important trend, since Apple spent a cool $10 billion on R&D last fiscal year, of which $1.9 billion was stock-based compensation.

The real question will be whether or not any of the products in Apple's pipeline can generate meaningful revenue growth in the future. And keep in mind that Apple's revenue base is so enormous at this point ($215 billion) that every basis point of growth helps.