Who doesn't love growth stocks? They make for incredible stories -- if you can catch them.

Here's what it's done since: 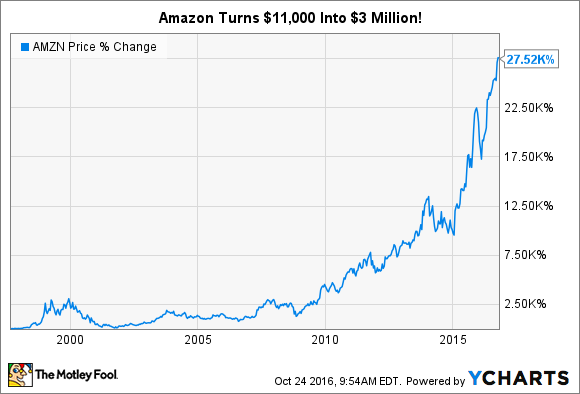 What this means for you...

One of the reasons David invested in Amazon was the company's tremendous track record of growth. In order to help you find the next monster growth stock, I went hunting for some of the companies growing the fastest. What does this mean? To make the list, a company had to have three traits:

Here are the stocks that rose to the top.

A discount e-tailer working in the Middle Kingdom

E-commerce is still in its nascent phase in China, but that hasn't stopped Vipshop (NYSE:VIPS) -- think of the name like "VIP Shop" -- from doing serious business. The company sets up flash sales for high-quality products at significant discounts.

In short, it seems that investors aren't happy to see sales growth slowing as fast as it is. While the company's second-quarter release blew past expectations, Vipshop sees revenue growing by around 40% for the upcoming quarter. While that's still a solid figure, many think the company should be accomplishing more based on how early we are in the Chinese internet revolution.

Some are also concerned that as larger companies see the success that Vipshop is having, they will move in and undercut Vipshop on prices even more -- because they can afford to lose money over the short term while securing market share.

Buying a new house? Your broker probably uses this software.

You can be forgiven for flinching when you hear names like Fannie Mae and Freddie Mac. The organizations played a central role in the subprime-lending crisis that led to the Great Recession. But that shouldn't stop you from taking a look at a similarly named entity: Ellie Mae (NYSE:ELLI).

Over the past five years, sales have grown by 43% per year, while EPS has moved up 25% per year over the past three years. But the stock appears to be equally expensive, trading at 133 times earnings.

I, however, think that Ellie Mae is a good deal, even at today's prices. Most importantly, the Encompass platform that the company provides gives it an important moat: real estate professionals have been switching over to Encompass in droves, and once they do they're often loath to switch again. Years and years of data and relationships are on the platform. While that data could be transferred, it would be a headache to accomplish -- and cost a fortune to retrain employees on a new network.

And for those worried about the price tag, it's worth noting that the stock trades at "only" 72 times free cash flow, and "just" 52 times non-GAAP earnings -- which backs out the role of stock-based compensation.

Making it easier to get your paycheck

While industry stalwarts Paychex and ADP dominate the market for processing and cutting payroll checks, there's a new player on the block: Paycom Software (NYSE:PAYC). Unlike the former two, Paycom is the first payroll provider that works exclusively online.

While the company's record of 40% revenue growth per year over the past five years is impressive, Paycom has been able to grow EPS by an eye-popping amount. Back in 2013 -- before going public -- the company produced $0.02 per share in earnings. Over the past 12 months, it has moved all the way up to $0.72 per share. That comes out to a growth rate of over 300%.

Obviously, that type of growth can't continue forever, but Paycom is continuing to win over clients. By combining payroll with other services -- dubbed human capital management by Paycom -- the company is able to provide one cloud solution for many different HR purposes. While I'm not an HR expert, I do know that this is a significant step up from what's provided by today's legacy players.

While you might be scared away by Paycom's 80 times trailing earnings price tag -- or its 70 on a non-GAAP basis -- it's important to remember that the company still has lots of market share to grab, and would likely make a very attractive buyout candidate, trading at just over $3 billion.

What to do with this information

I've listed these three high-growth stocks in reverse order of how I feel about them -- Paycom seems to have the best moat, while Vipshop the thinnest. But all three of these stocks are expensive and risky. The good thing to know is that you only need to invest a small amount to make a big difference -- over time -- if you get a true long-term winner and can hold it for decades.