Microsoft (NASDAQ:MSFT) has jumped into the all-in-one (AIO) PC market with a splash. The new Surface Studio looks like a strong competitor in the AIO market, particularly as it relates to creative professionals that value stylus inputs and a large digital canvas to work on. With the unveiling being just yesterday, it's clearly too early to call it at this point. But there's a nontrivial chance that Surface Studio proves to be a hit.

If it does, Apple (NASDAQ:AAPL) will have trouble catching up feature-wise (though Microsoft has a long way to go to catch up revenue-wise).

On Apple's earnings call earlier this week, CEO Tim Cook assured investors that Apple can adapt quickly to changing market conditions. "We have a strong sense of where things go and we're very agile to shift as we need to," Cook said. He was responding to an analyst question about Apple's strategic direction and whether or not Apple can react quickly, given its sheer size.

Here's the thing: Several years ago, Apple made a conscious decision as to its strategic direction and that decision is precisely what could hurt its ability to react. Back when the debate between touch input vs. traditional input was raging on, Apple made a decisive call that it would keep macOS and iOS separate. MacOS would rely on keyboard, mouse, and trackpad input, while iOS would be predominantly touch-based. That guided the developmental directions of both platforms, and still does to this day.

Marketing chief Phil Schiller describes it in the MacBook Air video from 2010 (starting at the 1:14 mark). The concern was the ergonomic challenge associated with holding your hand up interacting with a vertically oriented display for extended periods of time. Fatigue sets in rapidly. Apple's decision was to focus on the trackpad for gestures and touch input. Most touch-based Windows 10 desktops suffer from the same problem. Surface Studio addresses this ergonomic challenge with its clever hinge design.

But Microsoft started building in support for touch-based input years ago, starting with Windows 8. To be sure, Windows 8 was a wreck, but it laid the foundations of touch-based input that Microsoft has built upon and refined since then. Apple, on the other hand, has never supported this scale of touch input in macOS, and this isn't the type of thing you can slap together overnight. Ironically, cobbling touch input together without thinking it through is why the first tablet movement fell flat in the early 2000s. Apple can't react quickly and replicate Surface Studio with a touch-based iMac.

Apple thought of this years ago

It's also worth noting that this isn't some oversight on Apple's part. The company had this same idea in 2010. Apple patented an "iMac Touch" concept that year, with a dual-hinge design that would do exactly what Surface Studio does. Patently Apple picked up on it in August 2010. 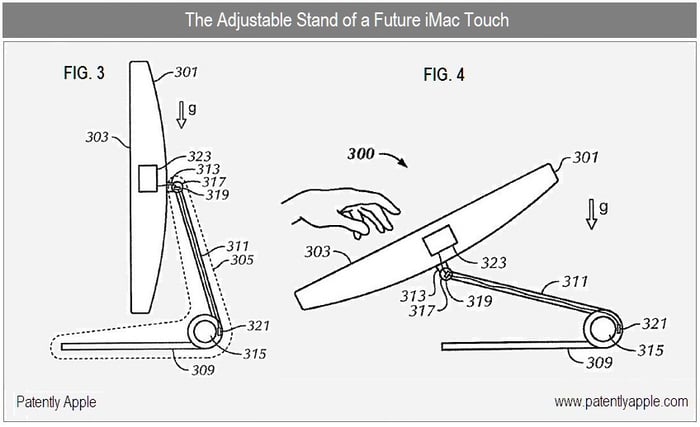 Yet for some reason, Apple never went with the idea. Did Apple ever prototype this iMac Touch? Probably. Could it eventually build support for broader touch-based input into macOS? Over time. But by actually pulling the trigger first, Microsoft has a shot at upstaging Apple with an idea that the Mac maker came up with a long time ago -- but never acted on.

Apple, Inc. Will Have Trouble Catching Up to Microsoft's New Surface Studio If It Proves to Be a Hit @themotleyfool #stocks $AAPL $MSFT Next Article
Current