Top peer-to-peer lender LendingClub (NYSE:LC) hasn't exactly delivered great performance to its stockholders in its short history as a publicly traded company. In an effort to grow the company's customer base, LendingClub recently announced that it intends to get into a booming $1.2 trillion industry: auto lending.

Since going public in Dec. 2014 for $15 per share, LendingClub's stock has lost more than two-thirds of its value. The main reason for the decline is a lending scandal that led to CEO Renaud Leplanche's departure, but there have been questions about the long-term viability of the peer-to-peer lending business for some time now.

The scandal hit investors' confidence in LendingClub at a time when it really couldn't afford to lose it. In the second quarter of 2016 (the scandal was announced in May), LendingClub posted its first drop in origination volume, a scary sight to investors. 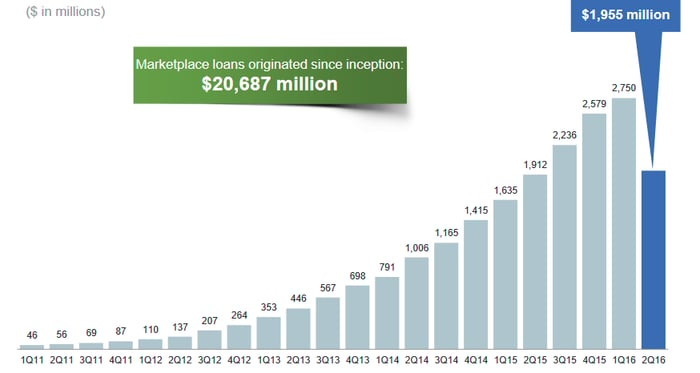 LendingClub recently announced that it will be getting into the auto refinancing industry, in the company's first-ever secured lending venture. Initially, the loans will only be available to consumers in California, and will be financed through the company's own balance sheet, but will eventually open up to its P2P lending marketplace as the program grows.

Loans will be available from $5,000 to $50,000, and refinancing through LendingClub will save the average borrower about $1,350 in interest over the life of the loan. In order to refinance through LendingClub, applicants will need to meet the following qualifications:

There have been some concerns among industry experts about the subprime auto lending market as a whole, which has seen rising delinquency rates and continually looser credit standards as lenders compete for business. However, LendingClub's standards exclude most of this market -- generally, subprime auto borrowers are defined as those with credit scores below 600.

Loans will come with interest rates ranging from 2.49% to 19.99%, depending on the borrower's qualifications. It's fair to assume that a borderline applicant (credit score just over 640, a few late vehicle payments, and a vehicle that barely meets the standards) would fall on the upper end of the range. However, since the average car loan has an interest rate between 4% and 5% depending on the terms, I'm assuming that the majority of refinancers will be toward the lower end, if LendingClub's savings claim is accurate.

A huge market opportunity, if it succeeds

There is approximately $1.2 trillion in outstanding auto debt in the United States, and only about $40 billion of that, or 3.3%, is refinanced every year, so there's clearly a large market to be addressed. In fact, LendingClub believes that the refinancing volume could double if the process were a little easier. In other words, there is an immediately addressable market for an easy-to-use auto loan refinancing platform.

One thing is for certain. LendingClub's operating expenses are far less than those of traditional lenders, and because of this, the company can offer consumers better loan terms as well as strong returns to people who invest in its loans. This means that the potential is definitely there. Will the auto lending market result in the next leg up for LendingClub? If it does, investors who had the patience to stick with the company during the tough times could be handsomely rewarded.

Could This $1.2 Trillion Industry Save LendingClub? @themotleyfool #stocks $LC Next Article
Current