Off-price chains T.J. Maxx, Marshalls, and HomeGoods have taken America by storm over the past 15 years by offering consumers high-quality products at bargain prices.

These days, another piece of high-quality merchandise is available at a bargain price: TJX Companies (NYSE:TJX) stock. TJX shares hit an all-time high of $83.64 this summer, but have plunged more than 10% since mid-August, sinking as low as the $73 mark in the past week. 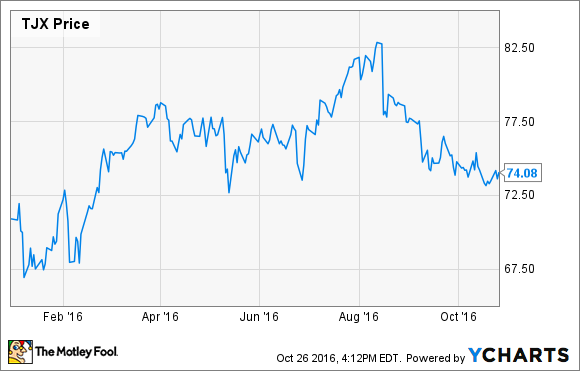 TJX stock may not seem cheap compared to other retail stocks. However, TJX deserves a higher earnings multiple due to its long track record of steady growth. Furthermore, it is significantly cheaper than shares of Costco Wholesale (NASDAQ:COST) -- one of the few other brick-and-mortar retailers to deliver steady growth.

Revenue growth continues, but so do earnings headwinds

TJX posted explosive earnings growth during the five years or so after the Great Recession, as bargain-hunting consumers flocked to T.J. Maxx, Marshalls, and HomeGoods stores. However, since the beginning of 2015, it hasn't been able to hit its long-term target of 10% to 13% annual EPS growth. 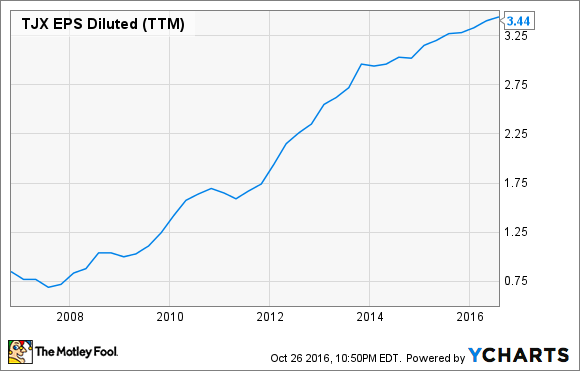 Instead, there have been two main factors holding back EPS growth. First, TJX has been raising its wages (particularly in the U.S.) in order to retain store employees. Second, the strong dollar is negatively impacting the profitability of TJX's international operations. In recent quarters, these two headwinds have reduced EPS growth by at least 6 percentage points.

Wage inflation in the U.S. is likely to remain elevated, at least for the next year or two, driven by the implementation of $15 minimum wage laws in some areas. Brexit has also caused a severe decline in the value of the British pound, which will negatively impact TJX's profitability in the U.K. (a key foreign market) for at least the next year.

On the other hand, these market factors are impacting every retailer. As a result, TJX may be able to offset these headwinds through modestly higher pricing. Supporting that trend, U.S. department store chains have been closing stores and reducing their inventory over the past year, creating an environment conducive to higher prices.

TJX may be able to offset rising wages by raising prices in the future. Image source: The Motley Fool.

Furthermore, while exchange rate changes are virtually impossible to predict, at some point the dollar will stop strengthening against other global currencies. Whenever that happens, it will remove a significant impediment to EPS growth at TJX.

TJX may also get a boost from renewing its credit card agreement with Synchrony Financial last week. Card issuers have found that partnering with top brands is extremely lucrative, which has given companies like Costco Wholesale the leverage to extract better terms. The renewal terms are private, but it seems plausible that TJX will get a step-up in revenue from its retailer share arrangement (essentially a form of profit sharing) for its store-branded cards.

Is the stock too expensive?

Wall Street analysts currently expect TJX to grow EPS by 4.5% in the current fiscal year. Meanwhile, the stock trades for 21 times the average EPS estimate of $3.48, whereas other large-cap U.S. companies trade for 18 times forward earnings, on average.

It's understandable that some investors think TJX stock is too pricey relative to the company's meager EPS growth. However, as long as TJX can maintain its sales momentum, its earnings will eventually follow. Assuming stable exchange rates, low- to mid-single-digit growth in comp sales and retail square footage would drive high single-digit revenue growth. Assuming TJX also continues its share buybacks, it can meet its 10% to 13% EPS growth target without any margin expansion.

Costco has also faced an earnings slowdown in the past year, largely driven by the same factors: the strengthening dollar and rising employee wages. Costco's sales growth has also slowed dramatically in the past year. Yet Costco stock trades for more than 25 times forward earnings.

It may take another year or two for TJX to return to its pattern of double-digit EPS growth. Most notably, it will have to manage the ongoing impact of Brexit on profitability in Europe. But based on the company's long track record of success and its continued revenue growth, TJX stock looks like a bargain at its current price.