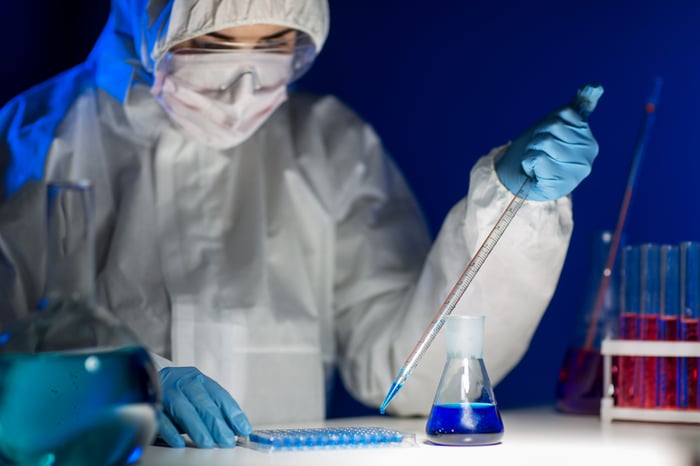 Shares of AbbVie (NYSE:ABBV), a global drug giant and the company behind the best-selling drug in the world, Humira, sunk as much as 10% in early trading on Friday after the company reported underwhelming third-quarter financial results. Shares of AbbVie have since pared close to half of the loss, and are now down 6.4% as of 2 p.m. EDT.

For the quarter, AbbVie reported global revenue of $6.43 billion, an 8% increase from the prior-year period, with Humira leading the charge. On a constant currency basis, Humira sales charged higher by 12.1% to $4.06 billion. The other standout was blood-cancer drug Imbruvica. Sales of the oncology drug crested the $500 million sales mark by a hair, and grew by 64.5% on an operating basis. On an adjusted basis, AbbVie earned $1.21 in earnings per share, a 7.1% increase from Q3 2015, and it slightly raised the midpoint of its full-year adjusted EPS outlook to a fresh range of $4.80 to $4.82, from its prior forecast of $4.73 to $4.83. 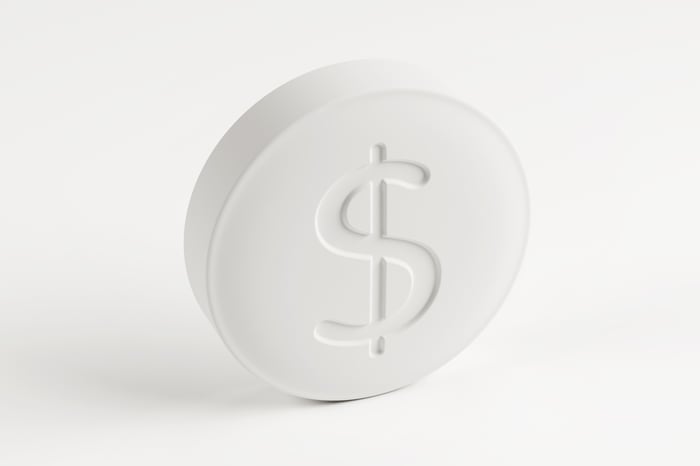 On the surface this looks like another standout quarter for AbbVie. In fact, it wound up reporting EPS ahead of Wall Street's expectations by $0.01. However, total revenue fell about $120 million shy of analysts' consensus figure, and the primary culprit was Humira. The Street had been counting on Humira for $4.17 billion in Q3 sales.

As some degree of solace, AbbVie also raised its quarterly dividend by a double-digit percentage, to $0.64 per share from $0.57, but this added bonus for long-term shareholders simply hasn't been enough to push AbbVie out of the red today.

Humira is currently extrapolating to more than $16 billion in annual sales across its 10 Food and Drug Administration-approved indications; the enormity of that number makes AbbVie a force to be reckoned with. Not to mention that the company's increased dividend now pushes its yield, including today's drop, to 4.4%, or roughly double that of the S&P 500. A yield like this, coupled with a forward P/E that's flirting with 10, could be more than enough to attract value and income investors.

However, the biggest concern for AbbVie remains that it's just too reliant on Humira for its growth. Humira's $4.06 billion in sales accounts for nearly two-thirds of AbbVie's third-quarter sales, and with the exception of the fast-growing Imbruvica, Creon, and Duodopa, every other pharmaceutical product witnessed an operational sales decline on a year-over-year basis.

What's more, Humira sales could come under pressure from the entrance of biosimilars, which are biological copycats of branded therapies. As Humira is the best-selling drug in the world, it's a prime target of biosimilar drugs. Biosimilars are also expected to price a good 10% to 25% below branded-therapy prices, which could weigh on the pricing power of select drugmakers, including AbbVie.

While AbbVie appears to be a smoking-hot value, it's a risky bet considering its leverage to Humira. More than likely we're going to see AbbVie looking to diversify through mergers and acquisitions in the coming years, which gives no guarantee of success. Though long-term gains could still be made with AbbVie, investors would be wise to temper their expectations a bit after today's earnings report.

AbbVie Inc. Plunges as Much as 10% With Humira Humbled in Q3 @themotleyfool #stocks $ABBV Next Article
Current