Fast-casual chain Noodles & Company's (NASDAQ:NDLS) woes continue. Shares have been falling since the company went public in 2013, and the stock value is now less than half what it was three months ago. With fast-casual dining gaining favor with Americans and rapidly growing, Noodles' woes are disturbing for investors. 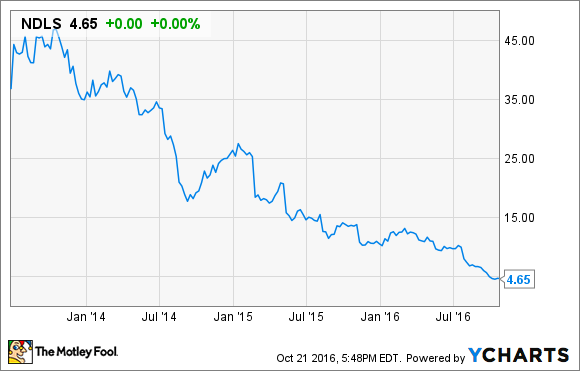 A wall of worry

When Noodles became a public company during the summer of 2013, the chain had 348 locations. Fast-forward three years to the last reported quarter, and the number of locations has increased nearly 50% to 514. Upon first look, this would seem like a good thing.

While revenue has certainly been pushed higher from the new openings, about 56% total revenue growth as of last quarter, growing restaurant chains also need help from established locations to fuel expansion. Comparable restaurant sales, which measure average customer bills and foot traffic in restaurants already open, started out positive. But problems began cropping up in 2014, when franchised locations notched declines. By 2015, all locations slipped into the red, and the trend has continued.

As the company pushed forward with its plans to open new units at a rate of around 10% per year, the cost to do so has pushed the chain from slightly profitable to unprofitable for the last year. Without comparable sales increases to help fund the expansion, the unprofitable picture doesn't look as if it will do an about-face anytime soon.

Noodles' lack of increases in foot traffic is disturbing, as over the past year the average food and drink establishment has seen sales tick up over 6%, according to the U.S. Department of Commerce census. Industry darling Chipotle Mexican Grill has struggled in the past year from its own issues, but the fast-casual dining experience in general has seen positive momentum. Brands such as Shake Shack and Zoe's Kitchen have been able to increase foot traffic to existing locations while simultaneously opening new ones.

In the past few months, though, the wave of increases for the average U.S. restaurant has taken a step back. Through the summer months, Americans were slightly curbing their eating-out expenditures. While this trend translates into a growth slowdown for chains riding positive momentum, the reversal has been bad timing for Noodles. The company has begun to experience comparable sales contractions, and during the last quarter comps declined a total of 1% companywide.

As a result of the poor performance in the past year, the company has seen its balance sheet take a hit, with cash resources depleting and debt on the rise. Earlier this year, CEO Kevin Reddy stepped down as CEO and chairman of the board. Stepping in to fill his shoes as interim CEO is Dave Boennighausen, chief financial officer for Noodles since 2012. Robert Hartnett was added to the board of directors and immediately appointed chairman in Reddy's place. The board has begun an internal and external search for a permanent CEO.

If Noodles & Company is to survive, it needs a full-blown overhaul. This is no doubt what the board has in mind as it searches for a new direction and new CEO. With fast-casual dining in general winning over fans, something about the current Noodles business model isn't working.

Investors beware, this stock is a falling knife. Until the company has found a strategy that works, I would be wary of buying in on any rebound hopes.