Slowly but surely, there has been some modest uptick in oil and gas prices over the past couple quarters. Based on this, one might assume that we would have expected a slight uptick in Statoil's (NYSE:EQNR) most recent quarterly results. That wasn't the case, though, as a few things got in the way. Let's take a look at the most recent quarter and try to make sense of the unexpected decline in earnings.

Statoil's decline in earnings took the market a bit by surprise since we have started to see a modest uptick in oil and gas prices across the board in recent quarters. The thing that most likely threw a big wrench in that assumption was a modest decline in production for turnaround maintenance as well as a large decline in natural gas prices in Europe. The average invoiced gas price in Europe declined from $6.96 per million BTU in 2015 to $4.85 million BTU this past quarter. Keep in mind that 77% of Statoil's revenue comes from its Norway operations, and selling natural gas to Europe is a large part of it. The bulk of this change shows up in the company's marketing, midstream, and processing business. 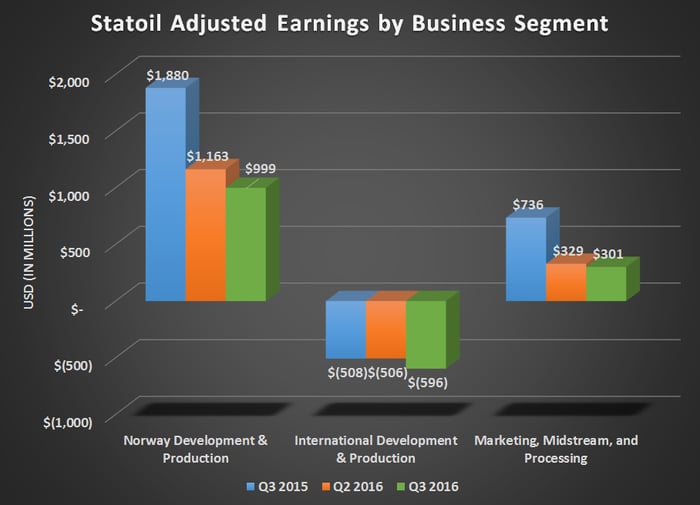 Like the prior quarter, Statoil continues to lower its operational and administrative expenses that help to offset the declines in prices as well as the temporary decline in production. Operational expenses for both its Norway and international development segments declined by a total of $286 million compared to the same quarter.

The most surprising thing in Statoil's results was that the company decided to scale back on its capital spending plan after revising it as recently as the prior quarter. CEO Eldar Saetre wanted to set the record straight, however, and highlighted that the decline in spending is more because of efficiency and not a scaling back of activity.

The financial results were affected by low oil and gas prices, extensive planned maintenance and expensed exploration wells from previous periods. We delivered solid operational performance with strong cost improvements and progress on project execution. Strict prioritization and continued good results from our improvement program allow us to further lower our 2016 capex and exploration guidance.

Overall, Statoil's results don't look great on paper, but there are signs it's doing the right things like lowering costs and keeping spending in check while oil and gas prices are low. It's hard to do an apples-to-apples comparison this quarter, though, because so much production was shut in for maintenance. Management expects that there will be a 40,000 barrel of oil equivalent per day impact on production in the fourth quarter as it wraps up this maintenance work. Once we get to see a quarter without any intentional production shut in, we will get a clearer picture as to how these cost savings initiatives are impacting the company's bottom line.