Ford's bottom line felt the pinch, thanks, in part, to the Super Duty launch.

Due to an expanded recall to replace faulty door latches on roughly 2.4 million vehicles that cost Ford Motor Co. (NYSE:F) $600 million, investors knew the third quarter was going to be tough in terms of year-over-year comparisons. In addition, the launch of Ford's first all-new Super Duty pickup in 18 years required a complete revamp of its Kentucky plant, which also cost a pretty penny. But that's part of business in the auto industry. Here's a look at some of the top-level highlights from the automaker's third-quarter and a couple of things investors shouldn't overlook.

Ford's revenue dropped $2.2 billion compared to Q3 2015, to $35.9 billion. The bottom line was as painful as investors expected: Net income plummeted 56% to $957 million. When excluding one-time items, though, earnings per share checked in at $0.26, ahead of consensus estimates calling for $0.20 per share.

Per usual, Ford's overall story flows with the ups and downs of its North America unit. Looking at automotive segment metrics, which are driven in large part by North America, you can sense the pressure from a plateauing market. Ford's wholesale sales were down 4%, which pushed revenue down 7%. Ford's global market share dropped from 7.6% down to 7.5%, and its operating margin was sliced from 7.7% to 3.3% -- but that latter figure will be a short-lived speed bump.

One bright spot during the third-quarter results also came from the North America business unit: pricing. 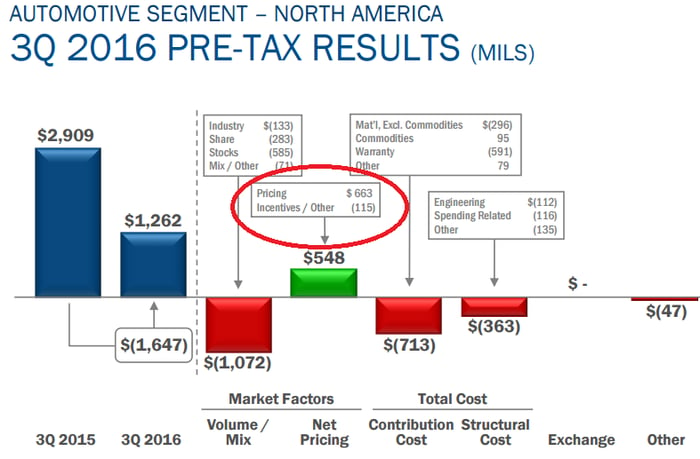 Looking at the net pricing, you can see that incentives did rise, but that increase was significantly offset by Ford's increased pricing power. That's a signal that Ford is matching its supply to demand, and is focusing on creating profitable sales at a time when customer demand is stagnating. Expect the gap between those two lines to narrow during the fourth quarter -- but definitely make a note to look at how much it narrows.

While many articles won't discuss Ford's financial services segment, Ford Credit, it's definitely something investors should pay attention to. In fact, it's easily the company's second-most-profitable unit. 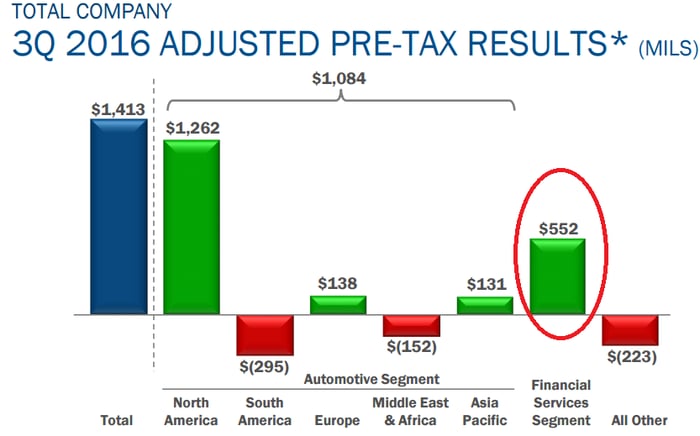 Ford Credit put up its best quarterly pre-tax profit since 2011, up 5% compared to Q3 2015, to $567 million. That result was driven in part by a 9% increase in net receivables and a 10% jump in managed receivables. Also, in case anybody is concerned that Ford Credit might be taking on riskier consumers, its average FICO placement score increased two points to 743.

Another factor investors tend to overlook is Ford's total global pension fund status. In past years, soaring pension costs left some companies with obligations into the tens of billions, Ford and its competitors included. But Ford has been very diligent over the past half-decade in reducing its obligations with voluntary payments, and CFO Bob Shanks believes the company's global pension should be nearly fully funded next year -- a huge accomplishment when you consider it was underfunded by nearly $19 billion at the end of 2012. Without a doubt, it's comforting to have an obligation of that size chopped down as the new-vehicle market peaks.

Ultimately, the third quarter was about what we expected: a mixed bag of results amid plunging profits due to recalls and the Super Duty launch. While the new-vehicle market is likely peaking, Ford is trading at a trailing-12-month price-to-earnings ratio of 5.5, and with a dividend yield right around 5%, it remains an enticing, and cheap, income play.