As expected, last week -- the first full week of the final earnings season of 2016 -- was full of dividend raises. Companies large, small, and in between announced improvements in their distributions, many doing so on the back of quarterly earnings releases. There were plenty to choose from; as usual, I've whittled my choices down to three notables.

The most prominent name in the payment card business, Visa (NYSE:V), is also a frequent dividend-raiser. It likes to hike its quarterly payout once per year, and last week it declared its 2016 raise: an 18% lift to just under $0.17 per share.

The company has done well enough lately to justify such a raise. In its most recently reported quarter, it took over as the sole credit card brand accepted at Costco Wholesale registers after the retailer ended its deal with American Express. It also replaced its rival as the brand stamped on Costco's proprietary credit cards.

This has given a boost to Visa's results, in addition to the company's recent absorption of its onetime partner, Visa Europe (despite the same brand names, the two companies were separate entities until Visa bought Visa Europe last year). In the card giant's Q4, both revenue and adjusted net profit rose, beating analyst expectations. 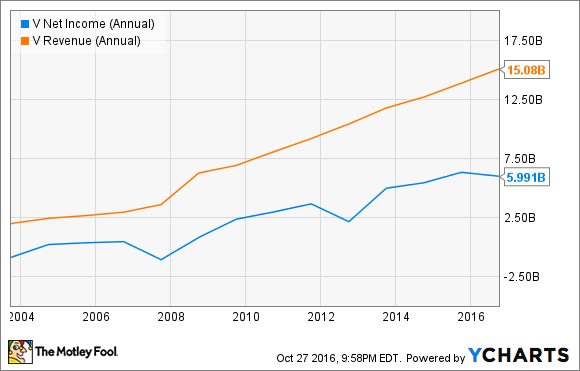 The company's operating cash flow was down by over $1 billion at the end of fiscal 2016 compared to the previous year, totaling $5.57 billion. But its investing activities are minimal, so there's plenty of free cash flow left over to pay a dividend. I wouldn't worry about the viability of the card giant's payout.

Visa's newly raised dividend is to be paid on Dec. 6 to investors of record as of Nov. 18. At the current share price, it would yield 0.8%. That's significantly below the 2.1% average of dividend-paying stocks on the S&P 500.

One of the country's many regional banking groups, Ohio-based Huntington Bancshares (NASDAQ:HBAN), is a frequent -- albeit somewhat cautious -- dividend payer. True to form, the company has bumped its quarterly dividend by $0.01 per share to $0.08, although that modest increase still represents a 14% improvement over the previous payout.

The market had generally turned bearish on Huntington Bancshares following the bank's announcement at the beginning of the year that that it would buy fellow regional FirstMerit. The price of the cash-and-stock deal was $3.4 billion, a generous 32% premium to FirstMerit's market value and more than twice the average premium paid for similarly sized regionals. 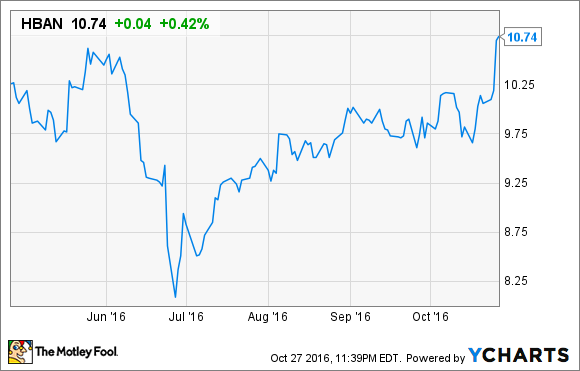 But fears about the destructive effects of the acquisition on Huntington Bancshares' finances receded after the company passed, with flying colors, its annual stress test run by the Federal Reserve. The Fed also approved the bank's capital allocation plans, which included the dividend hike and a capital raise to assist with funding the FirstMerit buy.

Going forward, with FirstMerit in its portfolio the bank should start profiting from its extended reach. Although its finances will be dented somewhat by the acquisition, the capital raise should help, plus the company has easily been able to afford its dividend for some time now. So I think this new payout is safe.

Huntington Bancshares will distribute said payout on Jan. 2 of next year to shareholders of record as of this Dec. 20. The dividend yields a theoretical 3% on the company's share price.

For the 33rd year in a row, business services stalwart Cintas (NASDAQ:CTAS) is upping its annual distribution. This maintains the company's status as a dividend aristocrat, i.e., a stock that has raised its payout at least once annually for a minimum of 25 years in a row.

That follows a fiscal year (2016) that broke records for revenue and per-share net profit. It also comes on the heels of a Q1 2017 that was also encouraging, with revenue and especially net profit showing very healthy year-over-year gains -- by 8% to $1.29 billion for the former, and by 30% to over $138 million for the latter. 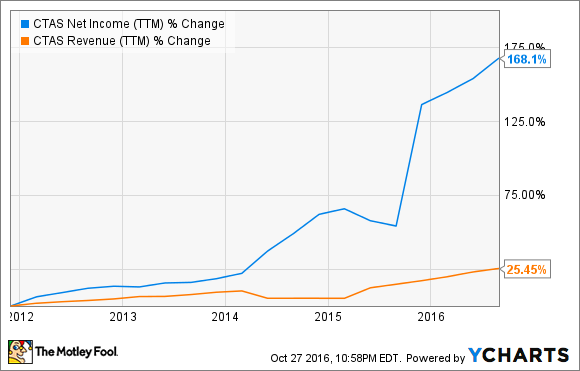 Much of the improvement was due to the good performance of Cintas' core uniform rental and facility services business segment, which saw a 6.5% increase in revenue, with costs rising only 4.3%.

Acquisitions ate into free cash flow in fiscal 2016, but the company remains well in the black in terms of FCF. It has managed to pay its distribution for over three decades, and we should fully expect it to maintain its dividend aristocrat status going forward.

Cintas' once-per-year payout will next be dispensed on Dec. 2 to stockholders of record as of Nov. 4. At the most recent closing stock price, it would yield 1.3%.